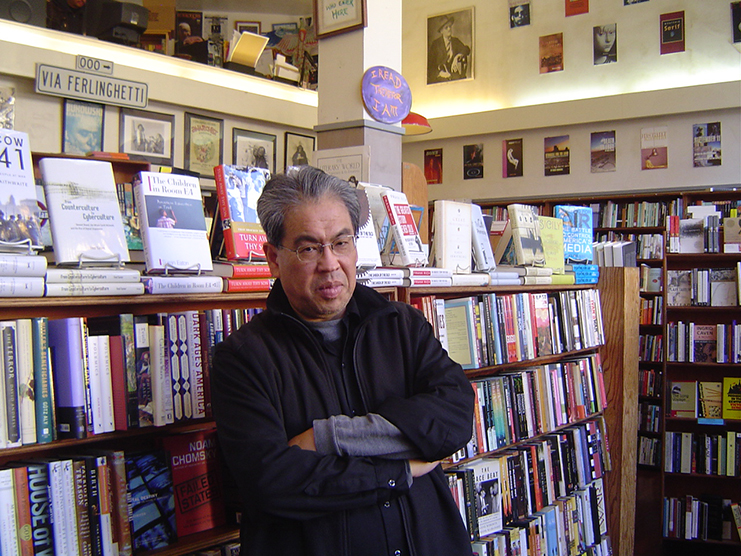 Is there a more iconic, respected and beloved institution in San Francisco than City Lights? This bookstore has existed for 75 years, in the same building in the same spot in a region in San Francisco that had existed as North Beach for over a century. In recent times parts of that area have been undergoing drastic changes, but City Lights stands there, pretty much the same, with every nook and cranny jammed full of books and run with the same philosophical outlook established in its creation by its owners.

Even more unusual is that the one of the original owners, Lawrence Ferlinghetti, still owns the store, and many of the employees have also been there for years. Paul Yamazaki is one of them. He first got a job there in 1970 and has been there ever since. In that position and even before, he has been witness to and participant in many historical events that mark life in the Bay Area. He celebrated his 50th year at City Lights last year.

Yamazaki comes from a family that has also contributed to history in many ways. A close relative by marriage was Minoru Yamasaki, world famed architect who designed the Twin Towers in Manhattan that were brought down on 9/11. His father, James Yamazaki, was a doctor, a pioneer in studying the effects of the atomic bombs. During WWII, Dr. Yamazaki served in the army as a doctor in the European sphere, was captured and as a prisoner of the Germans ended up in Dresden while his family was incarcerated in a concentration camp in the U.S. This experience of being a prisoner of war in Dresden was immortalized by Kurt Vonnegut in his great antiwar book, Slaughterhouse Five.

After the war, Dr. Yamazaki was put on a commission in 1946 to study the effects of the atomic bombs on children in Nagasaki, and he took his six-month-old son, Paul with him. He wrote several books on his conclusions, and at UCLA, he worked on various aspects on the effects of nuclear weapons. He has become a lifelong activist against the proliferation of nuclear weapons. Still active at age 102, he lives in Portland, Oregon.

There were other branches of the family who were distinguished in their way. Paul’s grandfather, Rev. John Yamazaki, was an Episcopal priest, a leader in the community and established St. Mary’s Episcopal Church in Los Angeles. This church became a pillar of life in L.A. for many Japanese Americans.

Paul came north after high school and as a student at San Francisco State, became active in the student revolt in 1967, famously known as the longest student strike in American history. For six months, students and some faculty conducted a strike, protesting against administration policies and also for departments of black and ethnic studies to be established. Joining the Asian American Political Alliance, Yamazaki got kicked out of school for his activism, was arrested several times and convicted for his activities. He served a six-month prison term in San Bruno jail where he was befriended by Native Americans also in prison and others who taught him jail etiquette and the unwritten laws on how to get along while imprisoned. All the while, the Vietnam War was raging and the country being torn by controversy and opposition to the war.

Yamazaki’s draft board attempted to draft him while he was in jail, and he sent a number of letters to the board protesting the war. This caused the board to conclude that he was morally and psychologically unfit to serve, put him into a 4-F category and consequently, he did not go to Vietnam. All these activities transformed his life, and the callow youth was exposed to political activism and the dynamism of the social scenes in San Francisco, the city where it was all happening.

Coming out of prison in 1970 and uncertain about what he wanted to do, he took a part time job at City Lights, a job that a friend and mentor, Francis Oka, arranged for him. Ferlinghetti, a WWII veteran, had grown to hate war, and welcomed Paul for his strong anti-Vietnam War stand. In the bookstore, Yamazaki was able to spend time soaking up the local culture and atmosphere, being close to the I Hotel, Kearny St. Workshop, and other hangouts congenial to local artists, writers, activists and musicians.

During this period, Paul and his friends formed a band called the Maroons, a name for Caribbean communities formed by self-liberated slaves all over South America. Yamazaki played the bass clarinet and has fond memories of practice sessions in the basement of City Lights. They would gather there after the store closed and play late into the night. They practiced in other venues like the Zen Center Bakery and as they became better known, he and his friends organized the Asian American Jazz Festival which went on for 25 years in the Bay Area, playing at many local venues. The band was attempting a fusion of black jazz and Asian American sensibilities, with much experimentation.

Yamasaki never did get back to college, but he was getting a priceless education working at the store, hanging out with very interesting people, literally soaking up information from immersion in books, and being mentored by others who had a broad vision of arts and artists in the community and the body politic. He has served at the main book buyer for 30 years, enabling him to keep abreast of all that is being published.

City Lights has also pursued a policy of hiring a multiracial, multiethnic, diverse group of people who are encouraged to participate in helping to select books. Many stay for years and in that way, the store has served as an inviting place for customers to come and find a huge variety of books, things they would not find in the average bookshop, and its world-wide reputation as an innovator, nurturer and haven for writers has made it a magnet, not only for all of us who live in the Bay Area but for tourists and booklovers everywhere.

City Lights is that rare business that managed to maintain its original impetus and thrive because of those who cared about it, who worked there, who contributed and developed a firm business footing through changing times. There have been several revolutions in the book business that forced the closure of many independent booksellers, not to mention even big players. You might wonder who reads anymore. In a world of Facebook, Twitter, the internet, who actually takes the time to crack a book and spend several hours reading? Well, apparently, many do. Book publishing and selling are still around and getting stronger. Yamazaki says the future looks bright.

In an interview with bookseller Mitchell Kaplan, Yamazaki talked about the future of the book business. He has been in a position to influence and support writers and publishers  by being active in organizations like the Council of Literary Magazines and Presses, the Small Press Distribution, and the Kearny Street Workshop. But most importantly is his involvement with the Winter Institute, which has a yearly gathering of some 600 booksellers where new young booksellers gather to talk and hear authors and publishers.

The growth of interest in literature at the business end of getting books into the hands of readers has been inspiring to Yamazaki. He says that there is much young talent appearing upon the scene, especially from corners that haven’t been well represented, such as communities of color. As we become an even more multicultural, multiethnic and economically multilayered society, literature can be windows into different lives. Literature can show what we can become, what America can become. Books can be a process of discovery and Paul Yamazaki will be at his post at City Lights, having a good time and expanding his vision of art in life.

When Lawrence Ferlinghetti passed away in Feburary 2021, San Francisco lost one of its most celebrated, influential citizens, and City Lights will have lost its central personality. But with people like Paul Yamazaki, we know that the spirit, vision and heart of the bookstore will continue. Long live City Lights!