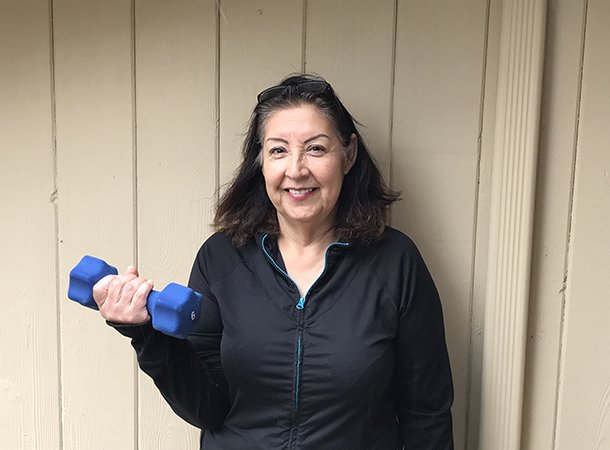 Maria Teresa Diaz had been feeling lethargic and low for a while. A busy grandmother in her mid-sixties, she spent years looking after others, often neglecting her own health. She had gotten used to being overweight and hadn’t felt the need to change.

“I had been feeling really low and down in the dumps. I had no energy and just had no life in me,” she said.

A trip to the doctor led to harsh and eye-opening news. He told Maria that, unless she made some big changes, she could expect to have a heart attack within 10 years. She was pre-diabetic and needed to watch her heart health. She left his office determined to turn her life around.

“I have three beautiful grandchildren and all I could think in the doctor’s office was that I wanted to live for them,” she said. “I’ve worked too hard to die young.”

“I started going to the UW weight clinic near U Village and asked to see a counselor and nutritionist,” she said. “I couldn’t do it without them and they really supported me.”

Armed with nutrition information and assistance, Maria joined the YMCA in Shoreline and started working out. Soon she was a regular, making new friends and enjoying a revived social life around working out.

“In the beginning it was hard,” she admits. “Change is never easy.” The new lifestyle grew on her and became routine. Today, Maria attends water aerobics in the morning and then lifts weights in the evening. “I am so motivated by the trainer there,” she said, praising his empathy as someone who had also lost weight and overcome health issues.

With the purchase of a home blood glucose testing kit, Maria made sure to check her numbers and weigh herself every three weeks at the clinic. Her efforts have paid off and in just over a year she has lost 20 lbs.

”More important than the weight, my sugar number is at 85,” she said proudly, referring to her blood glucose levels. “It was much higher before.”

Maria says the results are worth the effort. More energy has given her a new lease on life and is helping her keep up with her grandkids, “I was so happy and I could move about faster.”

Maria has advice for people who are at the beginning of her journey, “Stop feeling sorry for yourself and making excuses. We didn’t get overweight overnight and we aren’t going to lose it overnight.” She laughs, “I’m addicted to it now. Even if I’m sick I still go to work out.”

Maria has become her own best advocate at the International Community Health Services (ICHS) Shoreline Clinic, where she is seen by the nutritionist and works with a medical team to keep her health in check.

“My plan is to get off blood pressure medication,” she said. “At 66 I feel the best I ever have.”
Maria’s story is a reminder of the impact diet and exercise have on quality of life. She is happy knowing she now has plenty of time to enjoy her grandchildren.

“I don’t deny myself the good things,” Maria said, laughing. “I just have them in moderation. I feel so alive.”