A gorgeous riot of sunflowers, peonies, roses, daisies, and lilies framed by a crimson wall. Wait. The flowers begin to move slowly, and then begin to shift into shapes. The shapes take on a human form: arms, legs. Wait a little longer. The humans move, take slow steps. They are soldiers, dressed in floral camouflage. And they have guns.

Walk into the Tateuchi Galleries just to the right of the main entrance, to find a long, low white table that’s nearly the size of the room. On it are a thousand ceramic shards gleaned from master Korean ceramicists—discards, and therefore deemed useless. They’ve been given new life here in “Thousand,” an installation by Yee Sookyung. Yee has taken these shards and glued them with epoxy, outlining each seam painstakingly with gold leaf. It’s an interesting twist on the Japanese art of kintsugi, which seeks to repair that which has been damaged. Rather than trying to piece the shards back into their “original” forms, the artist has instead glued them together in order to create new forms.

Because the exhibition focuses on place, it’s hard not to think about the shards as a commentary on the political division of Korea itself. In Yee’s hands you can see the former lives of the shards—which might have been tea cups, kettles, bowls, or containers—as new creations. Three little pigs, which may have been ornamental handles on separate pieces, are reunited and placed in a row. Considered against the highly regimented images of North Korea so prevalent in the West, this installation seems to challenge Western notions of North Korea.

Just behind “Thousand” is Yee’s 3D-printed “The Very Best Statue.” The artist created this statue based on responses to a survey that she conducted in the Ukraine. She conducted similar surveys in Japan, Korea, and the UK, then generated other statues based on these responses. Moving from the scope of “Thousand,” it’s almost easy to overlook the statue, but I’m curious to see how the statue will look in its next iteration, based on responses from the United States.

After the quiet greens and creams and gold of Yee’s work, the next room comes as a surprise. Six mixed-media sculptures surround the room—something like round metal clothing racks that you’d find in a department store. Here they are pedestals with various domestic articles hanging on them—crocheted scarves, light bulbs, artificial plants. Yang Haegue has titled these figures “Female Natives,” and each figure has different accessories. The border between everyday household object and human form is playful in this exhibit, as well as her series of photographs at the back of the room, “Gymnastics of the Foldable”—black and white pictures of a clothes drying rack doing exercises.

The next gallery strips away the color of the sculptures, moving into Noh Suntag’s black and white photography series “the strAnge ball.” Each photo involves different scenes in the same region. However, all of them share one feature: a white ball, framed in different perspectives—as ominous moon, as echoing artificial surveillance to a cow’s eye, as golf ball below a tattered but fluttering flag. The ball, the catalog tells us, is a “radome,” a high-performance radar device installed by the United States to collect military information about the peninsula. Through persistent and multifaceted research, Noh discovered the reasons for its existence. The series is thus a powerful comment on the U.S. military presence in Korea and the effects of this presence on the everyday lives of Koreans.

More photos appear in the next hallway, this time life-sized portraits arranged in pairs. These are a sample of Jung Yeondoo’s series “Bewitched,” named after the American 1960s TV show about a witch who can perform magic with a twitch of her nose. Each diptych shows a man or woman in their “real” lives or day jobs, and then the same man or woman in their dream existence. The side-by-side portraits are intriguing, but I found the video installation of the full series even more interesting. Because the artist has placed his human subjects in exactly the same position and posture in both photos, it’s mesmerizing to watch the same subject morph gradually from reality to fantasy. In one pair of photos, for example, the young woman holding a child from one portrait watches us with the same eyes and expression as the child in her arms transforms into a bouquet of flowers in the next portrait.

I entered Lim Minouk’s full-room mixed-media installation “The Possibility of the Half” from the right, and was disoriented at first. The room is supposed to be a futuristic but defunct newsroom, including laptops, news cameras, several video projections, and a boom made out of a large tree trunk. A wooden satellite dish provides an organic (but broken) beacon of light and rest amid the wall-size video projections, cameras, and shattered glass on the floor. The loop of the larger wall-sized video projection is fairly long, approximately 3 minutes. The video is divided into two “channels,” one on the left and one on the right. On the left we see one “channel” of larger-than-life footage of Koreans weeping openly at the funerals of national leaders Kim Jong-Il (2011) and Park Chung-hee (1979), in an open collective grief. On the right, we see another spliced with thermal footage of nature, including palm trees, mushroom clouds, flames, and human hands. Eventually the mushroom clouds collapse in on themselves, seeming to represent attempts at healing and rebirth. Sometimes the footage on the left and right halves are the same, while at other times we see different footage on each half. A smaller video projection appears on screens behind the viewer, providing an interesting subtext, showing three different texts scrolling on the screens, nationalist rhetoric about the Korean leaders. A slightly different form of the installation won the 2012 Korea Artist Prize from the National Museum of Contemporary Art.

Finally, there’s Jung Yeondoo’s work in a crimson room. Two walls display the flowered headdress, flowery uniforms, and combat boots used in his video installation “Angel-Soldier.” “Broken Mirror” (2011) is a video installation projected onto a mirror—as soon as the viewer appears in front of the mirror, the mirror appears to shatter with the intensity (and sound) of a gunshot, and then restore itself again. The video installation Between Buddha and Jesus also appears on a mirror, and images of Buddha and Jesus morph quickly from one to another. Both installations are clever comments on the shattering image of the self (especially in the age of the selfie), but they’re also an eerie accompaniment to the soundless “angel-soldiers” in camouflage on the walls.

Paradox of Place is a beautifully curated exhibition, and the Seattle Asian Art Museum’s been given an extraordinary opportunity to share this with our region. 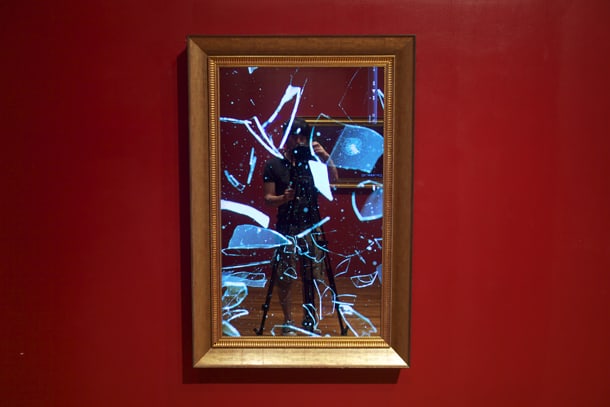