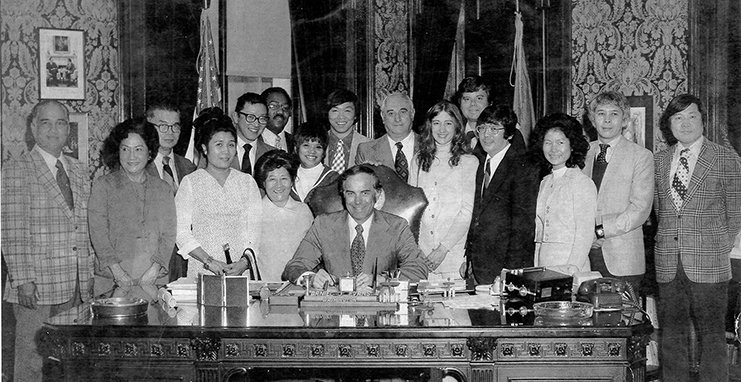 This year marks the 45th anniversary of the Washington State Commission on Asian Pacific American Affairs (CAPAA). This three-part article highlights its origins, pan Asian values, courageous confrontations, and community building to bust API stereotypes, and deal with anti-immigrant actions and racism. Going back to its 1972 roots, it is actually 49 years old this year.

Pio DeCano chaired the 1970-1972 Steering Committee that planned and negotiated with the Governor’s Office to establish the Asian American Advisory Council, the predecessor of CAPAA. De Cano tells us about the birth of the AAAC.

In the late 60’s and early 70’s, Gov. Daniel Evans was “energizing” state departments to set up programs for the incoming Vietnamese refugees from the U.S. -Vietnam war. He appointed an Asian to a state position that raised the hackles of the Coalition of Concerned Asians (COCA) because of her ethnocentrism. COCA was concerned that without a pan-Asian perspective, the appointee would not be able to provide inclusive advocacy for all API ethnic groups.

COCA was a group of young API activists that gathered intermittently at the International Realty office, owned by Alan and Dick Sugiyama’s family. They shared concerns about Asian pacific Islander (API) issues at work and at the colleges. The 1960s anti-Vietnam war, the feminist movement and Civil Rights movement informed the consciousness of the activists who crossed ethnic Chinese, Filipino and Japanese lines. The mainstream society saw APIs and treated APIs as stereotypically one and the same, the quiet minority with no problems.

During that time, DeCano was a graduate student at Western Washington State University. He worked with Cal Dupree and learned that Washington Commissions for Native Americans and for Latinos already existed. So why not an API Commission? (The Commission on African American Affairs was created in 1992.) Diane Mei Wong and Pastor Bert Tom who worked at the state communicated COCA’s desire for an API commission. The assertion for an API Commission was revolutionary. It confronted the stereotypic notion held by the state and the public that Asians don’t have any problems.

Gov. Evans sent (Judge) Jim Dolliver to meet with De Cano and COCA members. He was surprised to meet “angry Asians”, a departure from the nice passive API stereotype. The dialogue brought about understanding that API’s are multi-ethnic, not all immigrants, and face numerous barriers accessing services and opportunities. The “negotiations” led to the formation of the Steering Committee that met from 1970-1972. The dialogue with the Governor’s Office established an understanding of API issues of “pervasive discrimination and barriers in accessing government services”.

The “negotiations” resulted in two distinct wins for the API community — the creation of the Governor’s Asian American Advisory Council and the ability to gather, review and comment on the resumes of prospective Governor appointees to top level position, Commissions and Boards that shape Washington state policy and programs, and ensures accountability.

Asked why De Cano was not part of the first Commission, he uttered sheepishly “I’m a stir the pot kind of guy, not a maintenance one.”

In 1976, the Commission membership was expanded to include east of the mountains when Fred Cordova advocated for Rey Pascua to replace him on AAC. Pascua is a Filipino community leader from Yakama and recipient of CAPAA’s Vanguard Award.

This article will be continued in Part 2: CAPAA Facing Challenges and Building Statewide Community Power.