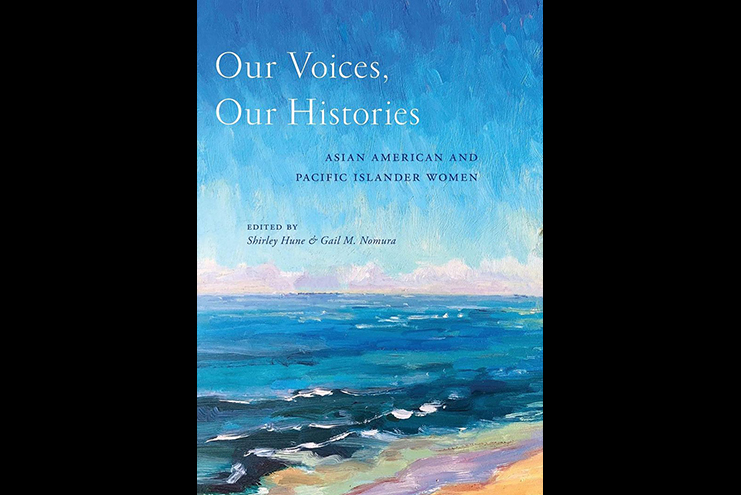 This anthology, edited by Shirley Hune and Gail M. Nomura, is a timely contribution to acknowledge, understand and document the rich complexities of Asian American and Pacific Islander women in the 21st century. It is a fitting sequel to the pioneering 1971 Asian Women, (Asian Women, U.C. Berkeley) and the 1989 Making Waves: An Anthology of Writings by and about Asian American Women (Asian Women United of California). While the former gave voice to pioneering Asian American women—Chinese, Filipino, Japanese and Korean — the latter included South Asian, Southeast Asian and mixed-race women. Our Voices, Our Histories is even more expansive with the formal inclusion of Pacific Islander women.

This addition is critical to understand the future of Asian American and Pacific Islander women, their families and communities in the U.S. The Pacific Rim has been a strategic military and economic U.S. resource since colonization of the Philippines in 1898. The human capital of Asian/Pacific migrants and refugees fueled U.S. industries with their disproportionate representation in earlier centuries, building the transcontinental railroad and the agriculture cornucopia of the West Coast. Today, they disproportionately create Silicon Valley firms, staff the American health care system, stimulate small businesses in economically-depleted neighborhoods, and serve in the armed forces.

There are many ways to describe this motherlode of 26 stories collected in almost 500 pages. I address four. First is heterogeneity exhibited by breadth and granularity. Geographical breadth extends from the Pacific Islands to the Indian subcontinent and the Asian land mass. Temporally, the indigenous women of Hawaii, Tonga, Guam and Samoa remind us to first be grounded in Mother Earth. From there we journey to the challenges and opportunities of first and second generation women who adhere to the norms of nuclear and extended families of their motherlands.  In the 21st century, we meet the newest generations who see themselves beyond familial relations and obligations, becoming liberated individuals and persons with their own worth and power. Particular attention is given to refugee Khmer and Hmong women who still bear primary scars of war and poverty. Their experience with survival and death is a far cry from the experience of more privileged Asians and Asian Americans climbing the corporate ladder and assuming preferred admission to elite universities.

Second, these stories depict the past, present and future as simultaneous, not sequential. The past is never past. The women are bicoastal or transcontinental, natural-born or adopted, heterosexual or homosexual, homogeneous or mixed race. They persevere and endure by drawing on strengths and experiences of those who came before them yet realize new possibilities on Gold Mountain. The vital role of mothers is lovingly portrayed in “The Mother’s Tongue: Language, Women and the Chamorros of Guam” by Sharleen Santos-Bamba and Anne Perez Hattori and “‘Up to My Elbows in Rice! Women Building Communities and Sustaining Families in Pre-1965 Filipino America” by Dawn Mabalon. “In Navigating the Hyphen: Tongan-American Women in Academia,” Halavallu Vakalahi and Ofa Ku’ulei Hafoka state, “…a woman’s womb is Te Whare Tangata (house of humanity).” This collection acknowledges the unsung pioneer Patsy Mink, the first Asian Pacific American woman to serve in the U.S. Congress.

Third, these narratives reveal resilience and resistance to adversity. A little known example by Yen Le Espiritu are the benefits of war in “Refugee Lifemaking Practices.” Despite the brutality and tragedy of the Vietnam War, she notes, “Wartime demands also provided some women with unexpected job opportunities that freed them from gender- and class-based constraints. Due to the urgent need for medical support during the war, nurses were among the first group of Hmong women to be formally educated and to establish themselves as professionals. Another example of the unexpected opportunities for women was the sex industry that sprang up in Saigon to serve American servicemen during the war. While the sex industry is replete with abusive encounters, it is important to note that some Vietnamese bar girls remembered the war as comparatively, “the best time of their lives,” because it gave them unexpected freedom: “freedom from the drudgery of domestic work, from the dominance of husbands and fathers, and from the expectations of their culture.”

Fourth, this collection acknowledges tensions between sovereignty with Americanization and collective identity with self-determination. This is visible in the use and explanation of the hyphenated “Tongan-American” by Vakalahi and Hafoka.  Among the newest Asian Americans, Chia Youyee Vang notes, “The prevailing practice seems to be that professional Hmong American women experience greater acceptance in the mainstream society than within the Hmong setting. As a result, some professional women do not expect the same treatment by community members as their male counterparts.” Milwaukee County Circuit Court Judge Kristy Yang goes on to note the limits of education,  “In this country, no matter how educated we are, if we are not able to sit at the decision-making table, then we cannot help. No matter how passionate we are about our Hmong people, if we don’t have a seat at the table, then there is little that we can do.”

What I find missing in this ambitious collection is the voice of scholars who are not in academia nor have advanced degrees; for examples artists, nonprofit leaders and public servants. Also, it would have been useful to include a conceptual framework to connect so many micro dimensions. An example would be distinguishing Asian and Pacific lands that have been colonized or subjected to war directly by the United States. Another would be to juxtapose the role of Asian Americans and Pacific Islanders in terms of Whites and the prevailing hierarchy within people of color. Conceptual frameworks provide macro dimensions. Finally, like passion without compassion, knowledge without collective action is insufficient to move forward and make waves. As Maya Angelou tells us, “I come as one, but I stand as 10,000.”