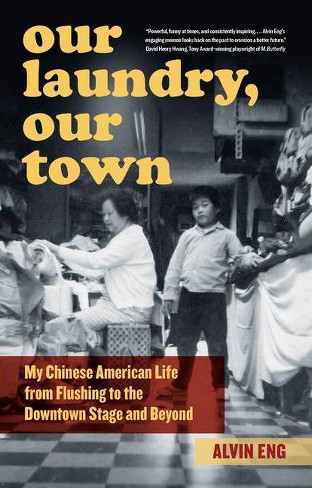 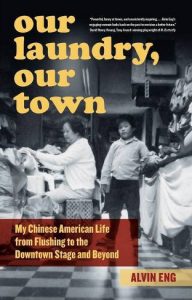 Alvin Eng is a New York City playwright and writer and a former rock journalist and performer. The youngest son in an immigrant Toishan family, his family were one of the last generation to toil in the Chinese hand laundry business. They were a dysfunctional immigrant family struggling to survive but Alvin bonded with his mother who is referred to as the “Empress Mother” and figures in many of his reminisces. Eng amusingly transliterates phonetically the Toishan dialect sayings and phrases of his mother who was never fluent in English and worked the back of the business doing the sorting and ironing.

This new autobiography adds to the corpus from a distinctly first-generation ABC (American born Chinese) perspective. Since the beginning of the 20th century Chinese American coming of age stories by writers like Jade Snow Wong (Fifth Chinese Daughter) and the recent celebrity autobiography by Canadian Simu Liu (We Were Dreamers) come to mind. Alvin Eng’s is a back of the laundry tale of redemption first through the music and lyrics of rock music. The Who’s Tommy is cited as a deep source of inspiration as is the great rock band Queen and the wearing of black nail polish of its lead singer Freddie Mercury.

Alvin Eng’s family were one of the first to make Flushing their home, over an hour ride via subway from Manhattan. Growing up in the 1970’s Flushing was not the booming Chinatown enclave and food destination it is today. In Flushing he comes of age in the Foo J. Chin Chinese Hand Laundry, the family was able to buy a house and his dad a car in a nice Jewish neighborhood and unlike his older sibs he did not have the full on back of the Chinese hand laundry and home experience growing up. He and his brother Herman had the luxury of living in a multicultural neighborhood in their own detached house. Finding inspiration and a creative outlet playing rock music in the garage with his brother and school buddies.

Alvin Eng transitions from being a NYC rock journalist of note and rock band performer when a creative writing course leads to him attending the ground breaking premier of David Henry Hwang’s masterpiece M.Butterfly.(I was there) He is transformed by this experience and devotes himself to writing. Eng’s bio is well written with many charming anecdotes and descriptions of his wannabe rocker days. Most bios are written near the end of a lifetime. he is still midway in his journey. His best writings in this book are about the laundry years and the affectionate portrayal of his parents especially his ‘Empress Mother’. In the final chapters he makes a ground breaking visit to Hong Kong and Guangzhou where he leads a student workshop at HK University based on Thornton Wilder’s Our Town only it becomes Our Town HK. Wilder’s original production is heavily influenced by traditional Chinese theater ideas. The Our Town production is devoid of set with minimal props and a narrator to move the plot along. Eng never really enjoyed the Chinese opera that his parents played in the back of the laundry describing it as the ‘music of pots and pans.’ Like most ABCs he was distancing himself from the traditional immigrant culture and never learned to speak Chinese fluently. I was amused of his description of his invitation State Department to perform his one man monologue’ The Last Emperor of Flushing’ in Guangzhou in American English. I was wondering how the audience responded and if they could get it. After all the Chinese American experience is unique to our growing up in the US experience may be incomprehensible in the Motherland. This new autobiography is a welcome addition to the Chinese American Toishan experience.