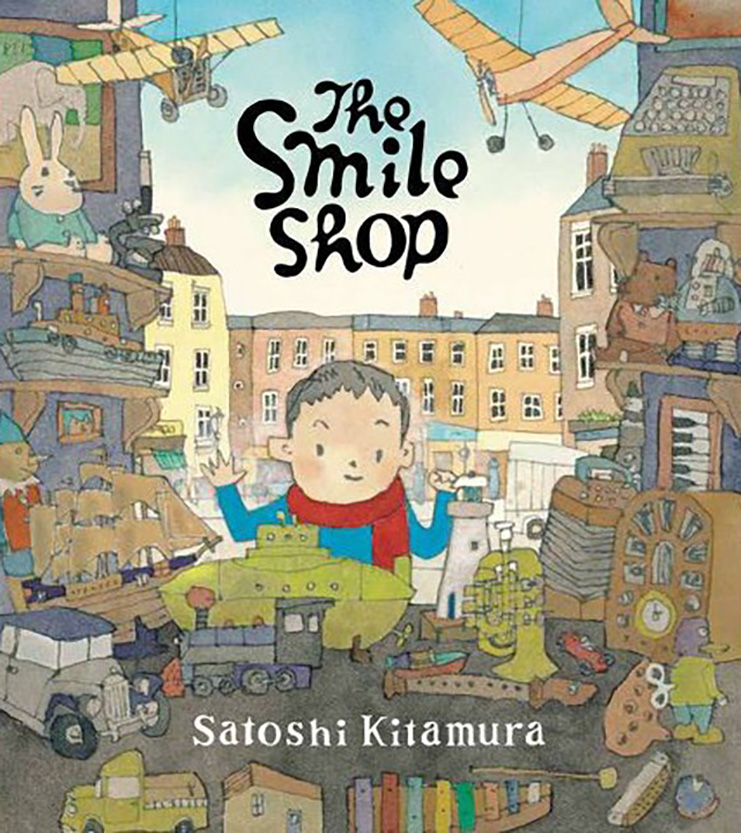 A comfortable chair. A warm fire. Hot chocolate. Cuddles. And the perfect book. Here are stories perfect for cozy reading over the holidays. 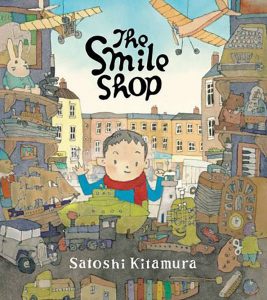 The Smile Shop by Satoshi Kitamura

The little boy is so excited. He has saved up all his pocket money, and today he is going to buy something for himself for the very first time. Off he goes to the market dreaming of what he could buy. The possibilities are endless. The market is busy and full of shops of all kinds. He loves the smells, sounds and sights. This little boat and that book look so interesting. This horn is loud, and that hat is just right. What to buy! What to buy!

And then…he falls on the sidewalk and his money falls down the drain. What is he going to do? He is crestfallen. He cannot buy anything now. Just before despair can set in, he spies something fascinating: a Smile Shop. He knows that he is in definite need of cheering up. When he explains that he has no money, the kind man behind the counter says that a smile cannot be bought; it can only be shared and exchanged. The man smiles. The little boy smiles back. And suddenly, he notices that the world around him is smiling. The shopkeeper has given him the gift of joy. That is what he brings back from the market. The playful classic illustrations, reminiscent of Maurice Sendak and Tommie dePaola, add to the joyfulness of the story. 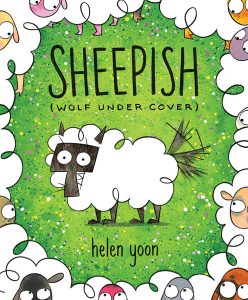 This is a story that will have little ones squirming with giggles. It is about the beauty of unconditional affection and friendship. With infinite care and thoughtfulness, even enemies can become friends. All the wolf wants is to eat sheep. He has visions of a sheep being served up to him on a platter with roasted vegetables like Thanksgiving turkey. So he sews himself a wooly white costume and off he goes to the sheep house. There he decides to blend in, so once he has pulled the, er, wool over the sheep’s eyes, he can carry off an unsuspecting sheep to his lair.

He decides to make himself useful in order to lull them. He does the dishes, reads books to them, dances with them, and plays croquet with them. At the end of the day, one of the sheep kisses him on the cheek. As he lies in bed with the other sheep in a dormitory – this is his opportunity to snatch a sheep – he finds he cannot do it. He likes them now. They have accepted a stranger in their midst and made him one of them. In guilty despair, he runs off home. He knits himself wooly sheep puppets in memory.

Just as he is sitting down with a “The No-Meat Diet” book, there is a knock on the door. He is astounded to find his sheep friends in disguise  – in wolf’s clothing, come to tell him how much they miss him. They had known it was him all along and yet had welcomed him. The words are spare, and they allow Yoon’s delightful illustrations to color emotions in and around the words to make for a complex, heartwarming story. 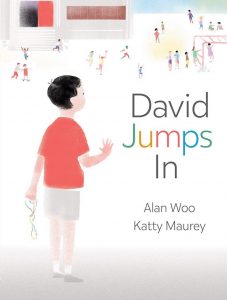 David Jumps In by Alan Woo, illustrated by Katty Maurey

As all new kids to a school know, it is difficult to join established friendships. This is a story with a heartbreaking beginning but a triumph of the spirit at the end. It is David’s first day at a brand new school. “He didn’t know anyone. He had no friends.” What if no one talked to him or played with him? But in his pocket, he took a big bundle of elastic bands all knotted and strung together end-to-end to play a game of elastic skip. This is an ancient Chinese game played by children around the world and is called by different names, such as Chinese Skip, French Skipping, Jumpsies, and so on.

When the bell for recess rings, what David had feared happens. All the kids race outside in the sunshine and start playing games with each other, such as hide-and-seek, Double Dutch, soccer and tag. No one invites David to play with them. Now David has a choice. He can sit and watch them, or he can invite them to play with him. He musters up his courage and goes up to some kids asking them if they would like to play elastic skip with him. And soon a group is flying merrily up in the air to the rules he has explained to them. They all have such a grand time that at the next recess, the kids rush to play elastic skip with David as an important part of their group.

Minimalism is a major feature of the book, in words and in illustrations, and they complement each other seamlessly to tell this story of big emotions. 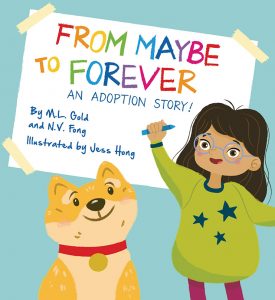 From Maybe to Forever: An Adoption Story by M.L. Gold and N.V. Fong, illustrated by Jess Hong

With finesse and sensitivity, the authors tell a tale of inclusion and diversity, while explaining the adoption process to young readers. The little girl has been waiting forever it seems to be a big sister. In the meantime, she has made many crayon drawings dreaming of how her new sibling would look like. Showing great maturity and understanding, the girl explains to her best friend, her pet dog, that sometimes, some mothers, who love their babies so much know that it is best for their babies to live with other families.

With marvelous artwork, the girl draws families with kids of all races. And she imagines how their new baby will arrive home and how their family will grow. She knows that adoption agencies help connect families with beloved babies. She is also savvy enough to know that despite a perfect match for their family, only a judge can decide whether a “maybe baby” is a “forever baby.” The excitement in the family when their precious baby comes home is joyfully shown through the illustrations. 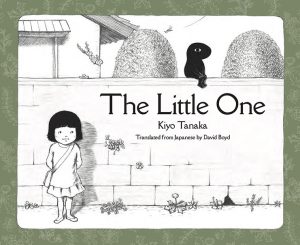 The Little One by Kiyo Tanaka, translated by David Boyd

With finely detailed copperplate etchings, the author beautifully shows the little girl’s friendship with her imaginary friend in this gorgeous book translated from Japanese. As the little girl is walking home one day, she spies a figure up on a wall. Who was it? What was it doing up there? She keeps on ignoring it, but it keeps on popping up along her walk, at a bus stop, in a flower shop…everywhere. Finally, she decides to ask to ask what it is doing? But the little one doesn’t talk and just runs off. She is curious and decides to follow him. Ducking through a hole in the wooden fence, the little one shows her so many beautiful flowers and plants.

At the end of the garden is a Japanese tea house, and they companionably share a delicious cup of hot tea. When the little one opens a closet door with a clack, it is empty, but she follows it inside anyway and through the dark closet up into an attic and through it into a magical forest by night. They play together with such abandon and joy. At last, tired and replete with delight, they return to the garden, where they bid goodbye to each other. When your minds and hearts walk together, words are unnecessary. 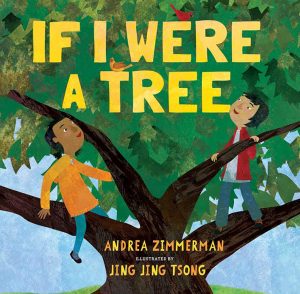 If I Were a Tree by Andrea Zimmerman, illustrated by Jing Jing Tsong

This story is a philosophical meditation in lyrical poetic language on what a child senses life would be like and what they would love about it if they were a tree. If the child were a tree, as Maria Popova has said, they would “always reach both higher and deeper, rooted in a network of kinship and ringed by a more patient view of time.” The child would feel the warmth of the sun, nests on the barks, and worms by the roots. They would taste the layers of land and soil and old buried bones and stones. They would smell sweet honey and bees and the breath of a bear. They would hear the hoot of an owl, the sneeze of a mole, and a rocky stream flow. They would see hills misty with fog and a web draped with dew.

If the child were a tree, through all their senses, the child would know that life endures, branches can bend, cold spells will end, and green leaves will always grow. At the back of the book, there is a guide for children on how to use their senses as they walk among trees. For as Hermann Hesse has said, “When we have learned how to listen to trees, then the brevity and the quickness and the childlike hastiness of our thoughts achieve an incomparable joy.”

Books for the very young are among the most difficult books to write and produce. How do you appeal to budding linguists and artists when their vocabulary is small and the way they think not as well understood? These books succeed on all fronts. 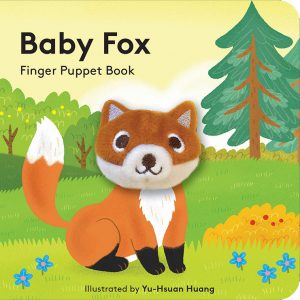 These finger puppet board books are sure to delight little ones just starting to walk. They are nonfiction books that are part of a series that gives more information about various animals. When a baby animal wakes, what is happening around him? For Baby Raccoon, the sun is setting and the sky is almost dark. When the baby is hungry, what happens? Papa Fox shows how to hunt for tasty worms. How do these baby animals play? What is something special about each animal? And so on, right until they go to sleep. The puppet peeking out of every page along with colorful artwork and simple words that paint big pictures make these books engaging for developing brains. 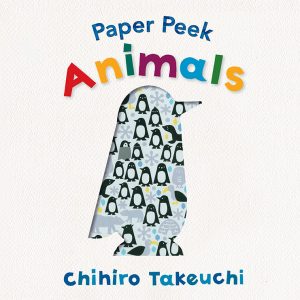 This ambitious board book teaches small ones to explore geography and math while learning names of animals and what they look like. With intricate cut-paper artwork so the animals are easily differentiated and identifiable, children are asked to find one lion, two giraffes, three camels and four zebras in Africa and one brown bear, two raccoons, three eagles, four moose and five beavers in North America and so on. All sorts of animals are covered across all seven continents and the oceans. Children will get to see walruses, emperor penguins, orcas, octopi, seahorses, sloths, squirrel monkeys, toucans and so many others on our beautiful biodiverse planet. It brings a deep appreciation of nature from readers young and old. 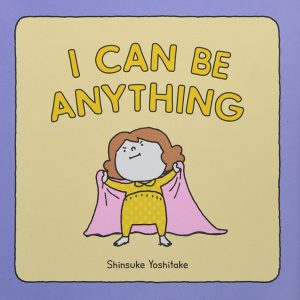 I Can Be Anything by Shinsuke Yoshitake

It is time for Natsumi to go to bed. But she does not want to. So she invents a game where she will pretend to be something and Mom has to guess what she is. Parents of all preschoolers know how much silliness and fun there is to be had playing games of pretend. And the opportunity to play instead of sleeping for a kid? Sweet! Natsumi has a vivid imagination that is sure to spark your little one’s imagination. She is a clothespin, a rice ball, a caterpillar, an omelet, Mount Fuji, shellfish in miso soup, an electric fan, overcooked broccoli and so on. But Mom is unable to get anything right. Natsumi is frustrated that Mom isn’t understanding. Children can well identify with Natsumi that adults lack imagination, while their imagination is perfectly sparked by hers.