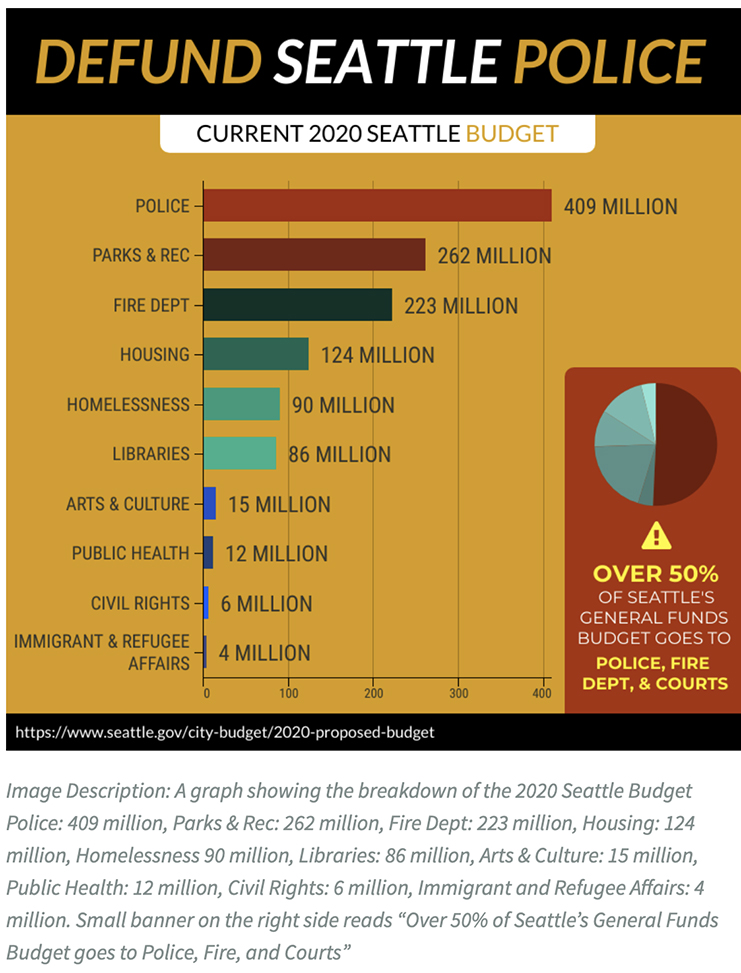 Black community members, tens of thousands of protestors, youth leaders, and some elected officials are speaking out to defund the police—but what does that mean? Don’t we need our police to respond when we are victims of a crime? Don’t we need police to ensure our property is protected, and respond to our calls for help? If the police are here to help us, why should we ask for less, instead of more?

Many Asian Americans view the police as friendly, respectful protectors of society. However, for Black Americans, police have always been an oppressive and deadly force. The first police in the U.S. were created as slave patrols. Their job was to protect private property and to capture Black people attempting to escape the inhumane treatment of white slave owners. Centuries later, Black people continue to be denied their humanity in America. They are treated like criminals—even when they commit no crime. As a Black person in America today, each day is fraught with potential danger.

Consider the following facts: Black men are 2.5 times more likely to be killed by police than white men. Black women are incarcerated at twice the rate of white women. In 2019, Black people were 24% of those killed by police despite being only 13% of the population. And for the Black Lesbian, Gay, Bisexual, Transgender, and Queer (LGBTQ) community, exposure to police violence and the criminal punishment systems is even higher: 73% reported encountering police in the last five years.

While criminalization and state violence deeply injure Black communities, they also affect everyone. Asian American families, especially those that live in neighborhoods alongside Black families, are also harmed by the police, the criminal punishment system, and the immigrant detention system. In a society that treats one segment of its population with the constant threat of extreme violence, no one is safe.

When the global pandemic hit in early 2020, Asian-owned businesses suffered an early decline in revenues, due in part to the racist belief that Asian businesses are unclean. The losses continued with Governor Jay Inslee’s “Stay Home, Stay Healthy” order that, while necessary, reduced customers to a trickle. Anti-Asian sentiment was further inflamed by President Trump’s use of terms like “Chinese Virus.” Most recently, some of our small-businesses have experienced vandalism, break-ins, and damage, both from anti-Asian attacks and from activity surrounding recent protests. The fear, frustration, and trauma in our community is real. They are compounded by the historical trauma of the Chinese Exclusion Act, the wartime incarceration of Japanese Americans, various U.S. wars that led to forced displacement and refugee crises, redlining and discriminatory lending, the placement of I-5 through the middle of our community, stadium-upon-stadium in our backyard, the streetcar line through Little Saigon, and the exhaustion of our immigrant and refugee communities at having to build and rebuild our lives.

However, Asian Americans and Asian immigrants must not let the oppression we’ve experienced detract from the larger movement for racial justice. The future of our community relies on the liberation of our Black siblings, brought here against their will, and the sovereignty of our Indigenous siblings, the first stewards of this land. Many of the civil rights we enjoy today—for example, the end of unfair immigration laws—are the result of resistance led by Black and Indigenous leaders. For generations, our communities have fought alongside one another even as some of us were used as political tools to drive a wedge into multiracial coalitions. So what is our role in the current uprising for racial justice?

We hear pain and exhaustion coming from our community and grief from small-businesses boarded up, fearing for their survival. But we will survive if we reach toward each other and not away. In this moment, we cannot lose sight of the police brutality that has called people to the streets to fight for their liberation. We cannot be used as a wedge to discredit Black protest. Our role is not to be the silent, obedient “model minority.” Instead we should embrace the history of our predecessors, who stood up for their own and others’ freedom and democratic rights. That is our legacy, and this moment calls for us to revitalize that tradition.

The Seattle Police Department receives three times more funding than housing, human services and public health combined. “Defund the police” is a call for a new system, a shift away from punishment and toward genuine public health and social support. When the Black community calls to defund the police, they also call for investment in programs and services that promote community success and well-being. As Asian Americans we know how critical this is, having fought tooth and nail for the social service and economic development organizations that exist in our communities. We built these organizations not through quiet requests to those in power, but through protest and bold demands that built community power.

The demand to defund police would send mental health specialists to answer calls to help our people in crisis, instead of officers with guns. Indeed, Direct Mental Health Professionals already do this work every day, with clipboards instead of weapons. They achieve their objectives without hurting anyone. Instead of investing in predictive policing technology and military-grade weapons, defunding the police would move money into public schools, early learning and youth development programs so that all of our children are better equipped to be successful in their lives. Defunding the police would replace armed patrols with caseworkers to ensure that people with nowhere to live can find shelter, a scientifically proven first step in breaking the cycle of poverty and making a better life.

We all want to live in a community where we are safe but that privilege is not evenly distributed. A true system of public safety is one where all people’s basic needs are met. A system that prioritizes policing over all other public services makes all of us less safe.

Asian Americans must join the Black community’s demands for justice, freedom, and equality that America has long promised, but has never yet realized.