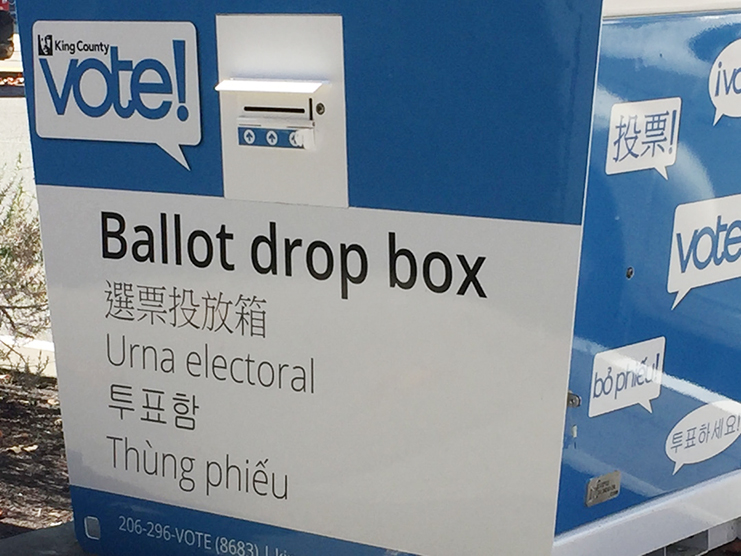 November 3rd is election day. Here in King County, Washington, we will be voting on ballot measures, a president, judges, and on many other meaningful state, federal, and county appointments and decisions. As we approach this day, I hope to stress here the importance of voting and making your voice heard. I hope to convince you to register if you have not already done so, and to mail in your ballot when the time comes. I hope to supply you with the inspiration to vote and with the tools and resources you need to get out there and advocate for yourself and your beliefs.

First, I must stress the fact that your voice matters. Your vote makes a difference. This is how we create systemic change. It is our fundamental right and social responsibility. It is an expression of what we believe in, a way to voice our opinions and our values. Voting shapes our future. It shapes the direction of this country and the decisions of our elected officials. People have fought for our right to vote, so let us use that power. It is imperative that we as a nation come together and make our voices heard.

Recently, many people have told me that they feel discouraged about the direction of this country and of the power of their vote. They tell me that their one vote does not matter, that they cannot actually make a difference, that nothing will change. But that is a myth, the most detrimental myth to our society. I know voting can seem daunting, I know the system has its faults, but it is the best way to voice what matters to us and effect change. It is that corrosive reluctant mentality that silences our voice.

According to the United States Elections Project, 39.9% of the entire voting-eligible population did not vote in the 2016 presidential election. Many of them likely thought that their vote would not matter. That is about 100,000,000 people not voting, enough to greatly tip the scales in any U.S. election. Your decision not to vote quickly adds up.

Be an example, inspire others to vote and to exercise their right. Be a part of setting a new voter-turnout record. Besides, your one vote matters a lot more than you might think. So many elections were determined by one, or only a couple, votes. For example, in 2016, one vote determined the winner of a Wyoming state GOP primary election, a Vermont state Senate Democratic primary, and a Vermont state House seat. In 2017, the Virginia House of Delegates race ended in a tie, as did a House race in Massachusetts in 2010, and a democratic Alaska House primary in 2006. Many more elections were decided by a margin of 2 votes, and so many more by such a small margin as well. Even here in Washington, a 2002 state House primary race candidate lost by a single vote.

Your vote does make a difference— your vote matters.

Many of this newspaper’s readers may be from minority or underrepresented communities like I am. Our voice matters; we must use it. According to data collected by the United States Census, less than 50% of eligible Hispanic and Asian voters voted in the 2016 presidential election nationwide. Eligible black voter turnout stood at 59.6%, still far lower than the 65.3% voter turnout from eligible white voters. The U.S. Census also notes that minority voter turnout actually decreased from the 2012 to the 2016 election. This is the problem; we are taking steps in the wrong direction. Voting is the best way to make our voices heard, but to do that we must go out and vote. We must hold our representatives responsible by exercising our political rights. Pew Research Center recently announced that Asian Americans are the fastest-growing ethnic or racial group in the U.S. electorate. Let us use our numbers and come together. Let us work to build multi-racial coalitions. We must rise up and vote to make our voices heard.

To the young people reading— please vote! Get registered. You can make a difference! Our voter turnout demographic (ages 18-29) has always been far lower than any other age grouping. We have to show we care! Gen Z and Millenials together make up a whopping 37% of the electorate (data from Pew Research Center). This election matters; all elections matter. We are voting to determine our future. We set the course. Whatever you may be passionate about, whatever your opinions may be, voting is a means to voice those opinions on a grand scale. If you care about climate change, gun control, immigration, reproductive rights, or any local or national political issue, vote! Elect representatives that align with your beliefs. Vote your conscience. Vote to support what you believe in. Vote to impact the political future you will live out.

Voting now has never been easier. While voter suppression undeniably exists, there are many resources to help get you ready to vote even during the unprecedented times of a global pandemic. Washington lets you sign up online! You can do it right here and right now, all you need is your state driver’s license or ID. You are not too late to register for the upcoming election, you have until October 26th! You can even vote early starting on October 16th.

To get registered simply scan the QR code in this article. Most phones now have QR scanners in their camera, simply point and click! Or Google ‘register to vote, Washington’ and sign up there. To conveniently check your registration status, you can go to Vote.org. You can even get registered through social media platforms now. Living in Washington, we are fortunate to be able to utilize mail-in ballots. There is no need to worry about the Coronavirus while voting; you are safe. Voting is your right, it is your opportunity, it is your chance to make your voices heard!