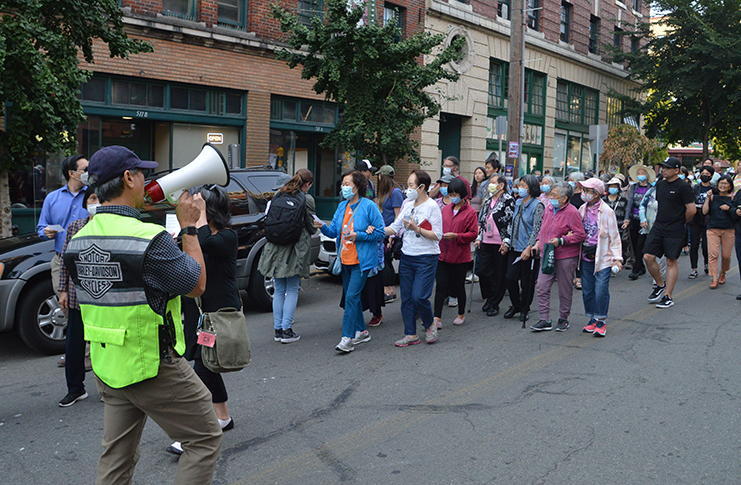 Residents and business owners of the Chinatown International District (CID) are just now hearing about a $66.5 million, 6.8 acre project to expand and enhance a shelter that will house over 500 people with support for 50 RVs and a 50 tiny house village. It was approved by the King County Council in partnership with Seattle and the King County Regional Homeless Authority. For a complex that opens this fall, these decisions were made without any meaningful community outreach or engagement. This follows a long history of policies that have been forced on the CID, starting with the Chinese Exclusion Act of 1882. This is systemic racism.

Systemic racism is a type of institutional racism that prevents and makes it challenging for people of color to participate in society. Left in the dark and with no opportunity given to negotiate nor engage on a highly impactful project, we are right now bearing witness to the latest racist action taken by King County and city of Seattle.

At the May 3 King County Council meeting, Councilmember Joe McDermott proposed ordinances to approve the execution of long term leases totaling about $9 million to open this low barrier facility. McDermott does not mention that it’s located across the street from the last remaining ethnic neighborhood in Seattle and the cultural home to the Asian community.

As a community of mostly immigrants, the people of the CID do not want to be confrontational and attract undue attention upon themselves. It seems like King County is taking advantage of this polite Asian culture and leveraging the racist concept of the model minority. This struggling community has had to deal with an abundance of pandemic-related racism, increasing anti-Asian violence, and rising crime. With already five shelters, the CID is the center for much of Seattle’s forgotten people. The county and the city are expecting a residential community to take on the burden of the city’s homeless crisis without any help and yet, to still rise above it all.

Councilmember Rod Dembowski says during this meeting “As we all know, for decades King County has a bit of a reputation dating back to the Kingdom, vis-à-vis with our relationship with the Chinatown International District. It wasn’t so great then. We had a lot of community concerns raised.”

Past racist actions seem to drive future racist actions. Decisions are being made for city and countywide gain at the expense of the CID community. In February 2017, the city announced the opening of the Navigation Center in the Little Saigon Neighborhood. The community expressed some concerns that were quickly dismissed and never addressed. The site opened without any engagement or outreach and has been an ongoing problem spot (encampments and open air drug market) for the entire CID since then.

This expanded shelter started in the same way. Initially King County outfitted a building to serve as a COVID-19 isolation and recovery center. It become an emergency smoke shelter in September 2020 with 77 beds. It soon expanded to became a homeless shelter with 269 beds. Now it will be a permanent shelter expanding to 500 beds. Again, with no community engagement as it was deemed an “emergency.” “Emergency” has become like another way to steamroll through CID without having to do the work of a racially conscious ally.

In response to a question from King County Councilmember Dave Upthegrove about an outreach plan, King County Director of Community and Human Services Leo Flor said, “We have met with SODO BIA and I want to recognize that we have also received from council members specific contacts within the Chinatown International District to ensure we are also providing appropriate outreach to that part of the community.”

King County and the city of Seattle do not know how to build relationships with minority communities. The CID community is not a monolith. The CID is composed of three major neighborhoods: Little Saigon, Japantown and Chinatown. This insufficient outreach. A few chosen individuals do not speak for all.

Flor continues, “A majority of community engagement is in front of us specific to the particular uses and particular design of the site.”

King County initiated their Equity and Social Justice Strategic Plan in 2016. This plan says it leads with racial justice and confronts the historical and racial inequities that continue to exist in the county. In 2009, Seattle directed all city departments to use the Racial Equity Toolkit. This toolkit lays out a process and a set of questions to guide the development, implementation, and evaluation of policies, initiatives, programs, and budget issues to address the impacts on racial equity.

It does not appear that this plan, nor city created toolkit were applied to this project nor many past projects that have impacted the CID. The fact that the community did not know about this complex is another example of the government’s disregard and disrespect for the neighborhood. Both the county and city are working together without recognition of the harms continuously perpetrated on CID.

In that same meeting, CM Dembowski mentions: “We want to take a moment to contemplate an amendment that this facility gets the same treatment with the same respect as our health through housing stuff, we’re doing meetings in Kirkland and Redmond and dialogue with the community, and I don’t think we should be delivering any less of a standard here.”

The amendment was never made. Flor committed to perform public outreach so the council approved the lease. Robust community outreach was mentioned many times during this meeting yet it never materialized.

CM Dembowski mentions during that May 3rd meeting, “I think today’s King County wants to do better.”

Good intentions are not enough from our elected officials who are always available for photo opportunities in the CID while campaigning. Once elected, they forget about their commitments and promises to the CID.

King County and the city of Seattle shouldn’t just want to do better. It must do better.

We can all do better.

We can elect better.