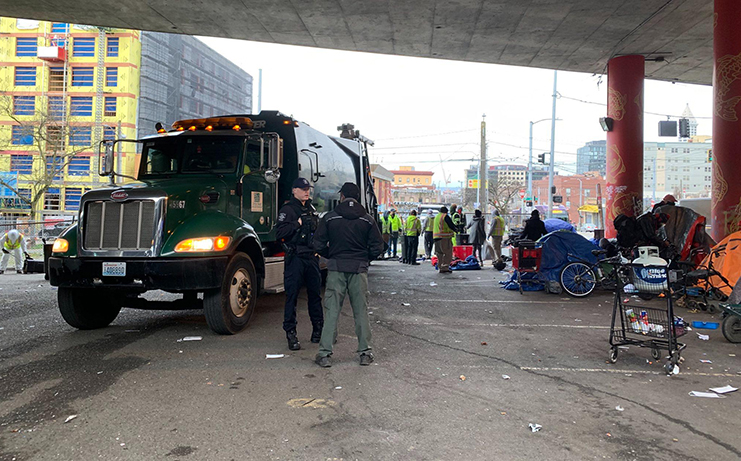 (Note: This is part three of a series of columns exploring encampment sweeps)

What we have in common: resisting displacement

The safety of unhoused people should not be seen as conflicting with the safety of housed residents and business owners in Little Saigon and the CID. The City of Seattle has waged a war of rezoning and displacement in Little Saigon and the CID since its inception. The conditions arising out of this war have failed to create a community where residents have their basic material, emotional, cultural, and social needs met, where they can receive support from their neighbors, and where they can feel safe. It’s no coincidence that the neighborhood has split into factions fighting each other for crumbs.

Today, Little Saigon and the CID are home to many low-income working class residents, including immigrants, refugees, and people living in public space, who are fighting for their homes against the encroachment of predominantly upper-class-serving amenities and development. Currently, the community faces Sound Transit’s plans to demolish historic neighborhood blocks in favor of a new light rail train station in the CID, connecting it to Downtown Bellevue, a place that has surpassed Manhattan in housing prices at a median price of $1.37 million.

Despite this shared struggle and history, there continues to be a viewpoint that unhoused people make bad decisions, or choose to be homeless. The reality is that trauma, abuse, domestic violence, mental health issues, and medical bankruptcy all cause homelessness. They are all ailments that can happen to any one of us.

The reality is that homelessness is a systemic issue, not an individual failing. We can trace one of its roots back to the 1980s with neoliberal policies under Ronald Reagan, who cut federal assistance to cities by 60 percent. This slashed funding for public transit and job training, dismantled federally funded legal services for the poor, and cut anti-poverty programs.

Seattle itself is in an affordable housing crisis, where landlords deny affordable housing vouchers, and the vouchers themselves only cover a percentage of “fair market rent.” This is in Seattle where average rent has spiked 92% since 2010. Landlords deny tenants based on criminal, credit, and eviction records, and thereby reinforce a system of punishment and criminalization. In 2017, only 44% of requests received housing, and the vouchers themselves can expire after 120 days. As of March 2022, 170 people currently wait in temporary shelters with no availability for housing. Shelters and housing themselves have strict criteria based on time spent living outside, substance use status, behavioral health status, contact information, and identification. There is a viewpoint against funding affordable housing, based on an assumption that people come to Washington State just to take advantage of our safety net. However, the government itself sows the bed and plants the seeds to grow “homelessness” in our neighborhoods, as 95% of folks living outside are from Washington State.

As businesses in Little Saigon and the CID express their frustration, Mayor Bruce Harrell has taken this as an opportunity to punish the poorest and most stigmatized in the community, seeking to arrest first, and ask questions later. This strategy only meets harm with further harm. Instead, we need interventions to interrupt this cycle of trauma.

“The city has spent well over $10 million on sweeps in 2017 alone…[and] $35-40 million on sweeps in the last 7 years.“ said Nikki Chau with Song2Sea, a local Vietnamese organizing collective. “Yet, homelessness has only increased. It’s very obvious that sweeps do not end homelessness. They are not the solution. How long will the city continue doing sweeps and spending money with no results? While there are more and more people who need housing but who can’t afford it every day?”

What if we were to divert the millions of dollars invested in sweeps towards solutions that nurture, instead of harm?

Demand real solutions for our neighborhood, its in our history

We can create better conditions for ourselves and all people in the neighborhood. Under constant threat of displacement, we can look to the history of community organizing in the neighborhood as inspiration for inter-community solidarity and self-organization against oppressive institutions and systems. From Donny Chin’s community-based safety and emergency response networks, to Uncle Bob and the Gang of Four’s work to resist destructive development and build affordable housing, collective action left behind a key legacy of uniting to fight for affordable housing and basic services. This work wasn’t about punishing people, it was about providing for everyone’s basic need. As a result, the community became more powerful in protecting and defending each other.

Our hope is that the struggles of small businesses, elders, immigrants, refugees, and long time residents will not be used by anyone as a justification for violent actions against people, housed or unhoused. It is in none of our interests to fight within the community when displacement is something that is a threat to most people, both housed and unhoused. When we are outpriced and displaced from homes, anyone can end up on the streets.

The City spends tens of millions on sweeps a year. We can demand this money go towards real solutions for our neighborhood. We can demand stable places for people to eat, sleep, and live. People need to fulfill their basic needs before pursuing their goals. We can demand funding more outreach workers and care coordinators to build trusting relationships with our community members. We do not have to continue picking up and cleaning up after the City’s problems ourselves.

We ask the people of Little Saigon, CID, and the broader community – can we recognize the unconditional humanity, agency and self-determination of all people, housed and unhoused? Can we recognize that everyone deserves to have their basic needs met, to feel safe, to not live in isolation, and to have relationships, dreams, and desires? Can we remember that the root causes of violence, neglect, against immigrant, refugee, and unhoused community members are one and the same  and embrace a holistic and genuine strategy for community safety?

For one emerging solution for Seattle, the House Our Neighbors coalition is organizing a ballot initiative to fund and build publicly-owned housing with restricted, subsidized rent. It presents an emerging option for Little Saigon and the CID to prevent further displacement under demolition, and to protect its people and history.

Learn more about House Our Neighbors (Yes on I-135)

This series features three articles exploring encampment sweeps as a policy failure, the problems they create, and the call for real solutions in Little Saigon and the Chinatown-International District.

Part 2: Discusses how sweeps worsen problems for housed and unhoused people, and how there are better solutions

Part 3: Calls for action against sweeps to improve the quality of life for everyone in Little Saigon and the Chinatown-International District

Nikki Chau contributed to this article.

Alex Chuang is a 2nd generation Han Taiwanese settler born and raised on unceded Duwamish land. Alex organizes with “The Egg Rolls”, a mutual aid crew that works with ChuMinh Tofu to support community members on the intersection of Jackson and 12th in Little Saigon and the Chinatown-International District. They are also a part of Massage Parlor Outreach Project (MPOP), and co-create the podcast Who Keeps Us Safe? with PARISOL: Pacific Rim Solidarity Network.

Johnny Mao is a community organizer busy putting theory into practice, or maybe the other way around. Johnny also organizes with the mutual aid crew, dubbed ‘The Egg Rolls’. He reminds us, “This account represents my opinion as an individual, not the opinions of the diverse organizers and staff who make up ChuMinh Tofu.”