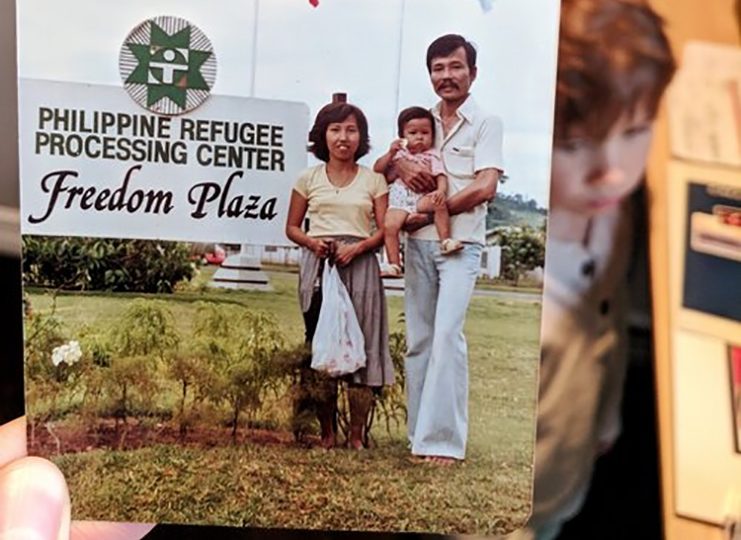 This article is part of a special project between the International Examiner and the South Seattle Emerald to produce content in 2022 addressing Asian and Pacific Islander racism and resilience. This content was made possible by a grant from the Seattle Human Services Department.

What does the word “solidarity” mean to you? It makes me think of actions that promote mutual support without ego, without centering oneself, without a power dynamic based on caste, and without power grabs. I think of all the people who made it possible for someone like me to not only survive, but thrive.

The aftermath of the fall of Saigon is a story many Indochinese people are familiar with: people desperately escaping tyranny, persecution, torture and death. Countless Vietnamese helped American soldiers during the American War. The Vietnam War is known as the American War in Vietnam. There are an estimated 3 million unexploded ordinances left behind that kill or maim children and unsuspecting victims to this day. Additionally, there is contamination of the land and the people from the toxic chemicals from these ordinances and Agent Orange.

All of these are remnants of the war. A war in which my father would have been tortured for information since he was one of many who fought side-by-side with American soldiers. He was like an Army Ranger, jumping out of airplanes, running drills, training and clearing territory. As a result, he was a “valuable asset.” One of many that were left behind to fend for themselves and their family.

I was a child when my parents planned the escape under the cover of the night and became boat people. My father and a few men would operate the boat while family and friends were crammed below deck like sardines, so we would pass as a regular fishing boat. We made our way across the tumultuous South China Sea towards the Philippines. The conditions were harsh and many, including myself, fell ill. Once ashore, I was fortunate to be able to receive medical attention and surgery when I went into septic shock. Our family stayed for almost a year at a refugee camp called Freedom Plaza otherwise known as the Philippine Refugee Processing Center set up by the United Nations.

Luck brought me here, and we’ve made a life, but what good would all of this have been if I don’t make decisions in solidarity? So, solidarity are the actions of those in the Philippines who set up and operated Freedom Plaza for Indochinese refugees like my family. Solidarity are also the words of the Black American community who lobbied for our admittance into the United States.

Black Americans like Coretta Scott King, Martin Luther King Sr., and Bayard Rustin stood up for people whom they did not even know despite economic hardships and their own challenges in a white supremacist system. They still urged President Carter to let us in because it was their belief that “[t]hrough our arduous struggle for civil, political and economic rights in America, we have learned a fundamental lesson: the battle against human misery is indivisible. Our continuing struggle for economic and political freedom is inextricably linked to the struggles of Indochinese refugees who also seek freedom.”[3]

To be clear, solidarity is not a quid pro quo. I’m not doing the work because I owe anyone anything. I’m not even paying it forward. I am modeling solidarity that I learned as an adolescent by watching my parents, Black and Brown civil rights leaders, Filipinos at Freedom Plaza, and many others who experience hardships yet still put in the work. For example, my parents worked multiple jobs yet still found the time to work soup kitchens. They pitched in even though they were struggling to make ends meet. They, along with the people I model, didn’t do the work because one day someone would return the favor. They did the work because it was the right thing to do.

I love all of you with my #VeryAsian heart.

Han Tran is a Vietnamese refugee who is also a mom, wife, daughter, innovator, electrical engineer and community advocate. She ran for Bothell City Council in 2021. She continues advocacy via mutual aid and working with community members to amplify the voices of marginalized people. She believes there is strength in solidarity.