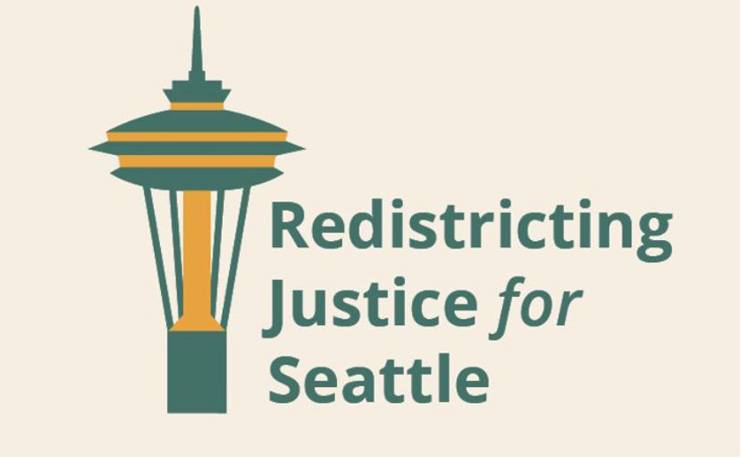 As someone who for years has lived in and worked with people and organizations in Seattle’s Chinatown-International District in City Council District 2, I’ve come to appreciate this diverse and vibrant community, but I’ve also witnessed its unique struggles as one of the few majority POC areas of Seattle. We’re grappling with issues of gentrification, displacement, public health and safety among other things while also just trying to live our daily lives. Our city government has an impact on the said daily lives of residents that cannot be understated. Historically, communities in District 2 including Asian Americans, Black folks, and other people of color have disproportionately been denied opportunities to shape our city government and our own political destinies. However, this year, for the first time Seattle residents have a unique, once-in-a-decade opportunity to be a part of that process through redistricting.

Members of the Redistricting Justice for Seattle (RJS) Coalition are fighting to ensure communities’ of color voting rights are protected this redistricting cycle such as those in Yesler Terrace and the Chinatown-International District, which are currently split between two districts. The numerous member organizations who are part of RJS, including Asian Counseling and Referral Service, are organizing to reclaim our political power in the redistricting process and keep the Chinatown-International District and Yesler Terrace together in the majority-people of color District 2 in South Seattle.

RJS organizations have also organized numerous listening and mapping sessions for community members in South Seattle and other communities of color to provide their input on where their neighbors live, what communities need to remain together, and what they need to be able to engage with the process.

While the details of creating the actual map proposals can be complicated and technical, RJS has arrived at several simple messages and demands of the Redistricting Commission based on our engagement with community members.

Based on input from impacted community members in the Chinatown-International District and South Seattle, we’ve also heard several specific messages loud and clear.

Our communities have long struggled to achieve meaningful representation in our city government, but we have an incredible opportunity to influence the next decade of our local elected leaders, and we encourage community members to check our website (RJS: City Council Redistricting) for more information, as well as the City’s official page (Seattle Redistricting Commission) to learn how to engage with the process. The commission will be holding a retreat in early August to go into deep deliberations on district boundaries, and we encourage community members to write to the commission before then and provide your input. This is our chance to shape our own political destiny and we can’t afford to let it pass us by.

Joseph Shoji Lachman (he/him) serves as the Policy Manager at Asian Counseling and Referral Service (ACRS), and also helps lead the Redistricting Justice for Seattle (RJS) Coalition. The RJS Coalition is composed of over a dozen community-based organizations dedicated to ensuring that vulnerable and historically marginalized communities can fully participate in the redistricting process and influence the redrawing of city council district lines.