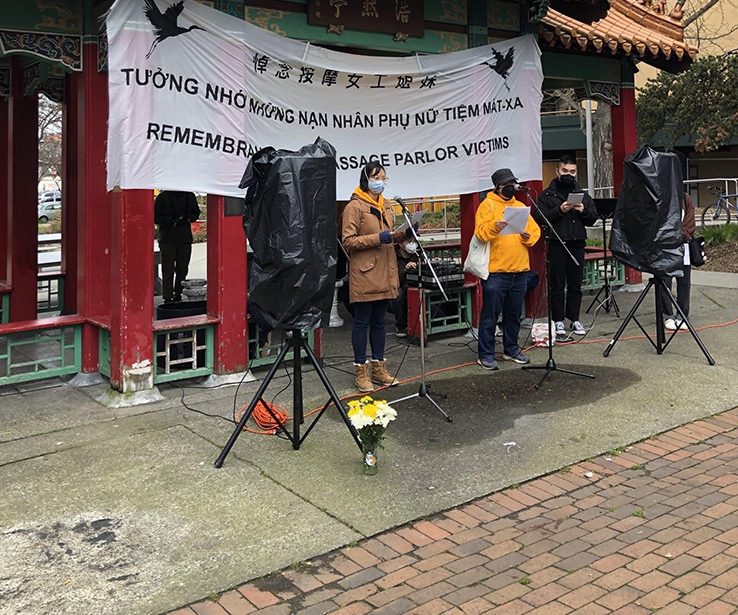 The past few weeks we have been running ourselves ragged.

Michelle Go and Christina Yuna Lee, two Asian American women in New York City, had been killed mere months ago. The one-year anniversary of the Atlanta Spa Shooting was upon us. Unhoused communities were being displaced in an unprecedented barrage of “sweeps” without services. As people were separated from their tents, food, medication and friends, the City of Seattle was reproducing the exact crisis conditions which led to the deaths of Michelle and Christina.

But we continued forward, as we always do. We planned a vigil for those killed, started building a support hotline for massage workers, and distributed food to our unhoused neighbors.

Mayor Bruce Harrell’s narrative of 12th and Jackson as a “hotspot” of crime — bolstered by exploitative media coverage and community calls for police to “clean up” the CID and Little Saigon — took off. So the police came, harassed guests at the ChuMinh weekly free meal service, profiled Black and Brown community members, and carried out illegal stop-and-frisk searches.

Then, on the day of the vigil, a notice of displacement appeared: On Thursday, 3/17, residents in encampments along Jackson to King Street, some of whom only speak Vietnamese, would be removed. The notice was in English and Spanish, and both posted numbers led to an English-only hotline.

Over the next week, armed police forcibly evicted 150 unhoused people, including immigrant elders, with only a few overwhelmed and under-resourced service providers and no interpreters on site. Only one city social worker attended the March 25th Dearborn Street sweep, arriving 45 minutes after the Seattle Police Department’s first warning to vacate or face arrest. The Mayor, SPD, and some of our neighbors framed this as a positive step towards safety. But the reality is that these forced removals are a violent act that accomplish nothing but to criminalize poverty, destroy existing shelters, and give the city authority to displace vulnerable community members.

The CID and Little Saigon should be wary of expanding the City’s power to displace. Many residents and business owners in Little Saigon are in the United States as a result of U.S. military interventions and violence in Southeast Asia. The few blocks that remain of Seattle’s once sprawling Nihonmachi are the result of military evictions of Japanese communities along the West Coast. Racist housing practices like redlining created Chinatowns by making it illegal for Asians and other people of color to live anywhere else. Across the city, rents have spiked by 92% since 2010, pushing out many low-income households as gentrification encroaches.

We must recognize the experiences of those being displaced in the City’s war on poor people as part of a long, continuing history of displacement in the CID and Little Saigon — and align ourselves against the unjust displacement and dispossession of our neighbors. No one deserves to be pushed out of our countries, neighborhoods, and homes. We are all vulnerable to displacement. If it’s Black, Brown, poor, and unhoused folks being targeted today, it will be elders, families, and businesses tomorrow.

As people who live, work, organize, and have ancestral and cultural ties to the CID and Little Saigon, we desperately want safety for us all. The rhetoric used to justify “sweeps” is that they increase safety for Asian businesses, property owners, and housed residents. But this vision of “safety” for some relies on the displacement, dispossession, and death of unhoused Asians, undocumented Asians, Asian massage parlor workers, Asian drug users, Asians struggling with their physical and mental health, and our Black and Brown neighbors who have lived alongside us for generations. These are our aunties, uncles, friends, and neighbors too — and they are no less deserving of shelter and belonging.

It is telling that sweeps are never accompanied by comprehensive services that contribute to real safety. The City has spent tens of millions of dollars on endlessly displacing unhoused people and creating scarcity that makes us all less safe. Imagine if that money had gone towards affordable housing for the 350 Asian and Pacific Islander families displaced from the CID between 2010 and 2014, expanding in-language healthcare for housed and unhoused immigrant elders, increased sanitation and waste removal, food, or rent relief for small businesses struggling to stay afloat during the pandemic.

Real safety means we all have the right to lead a dignified life. It means having enough food, shelter, and clothing. It means no one is isolated, thrown away, or seen as undeserving of care. When we provide for everyone’s basic needs, we reduce the conditions that lead to acts of desperation and violence. We can intervene before violence happens by cultivating the skills and relationships to support each other.

We draw from past and ongoing efforts within the CID and Little Saigon that are actively building safety for our communities:

The CID Coalition defends the homes of working class and renting community members against the isolation and desperation that gentrification creates. Stop the Sweeps provides critical support during and after a sweep to maintain support networks for those displaced, mitigate conditions of crisis, and create safer neighborhoods for all.

Collectively, these grassroots groups are present in the neighborhood almost every day of the week. These existing efforts teach us that we can choose to believe everyone is deserving of everything they need to survive. Instead of turning to the police, we can use care as a front-line approach to houselessness, public health, and violence.

Together, we can stop the displacement of our housed and unhoused neighbors, keep each other safe, and keep our culture and traditions alive.

This op-ed is a collaboration between CID Coalition, The Eggrolls, Massage Parlor Outreach Project, and Pacific Rim Solidarity Network. We are a coalition of community-based safety and grassroots care providers based in the Chinatown-International District and Little Saigon. We are sharing with you our collective vision of safety and community. Our work aims to create alternatives to criminalization as a front-line approach to houselessness, public health crises, and incidents of physical violence in the neighborhood.