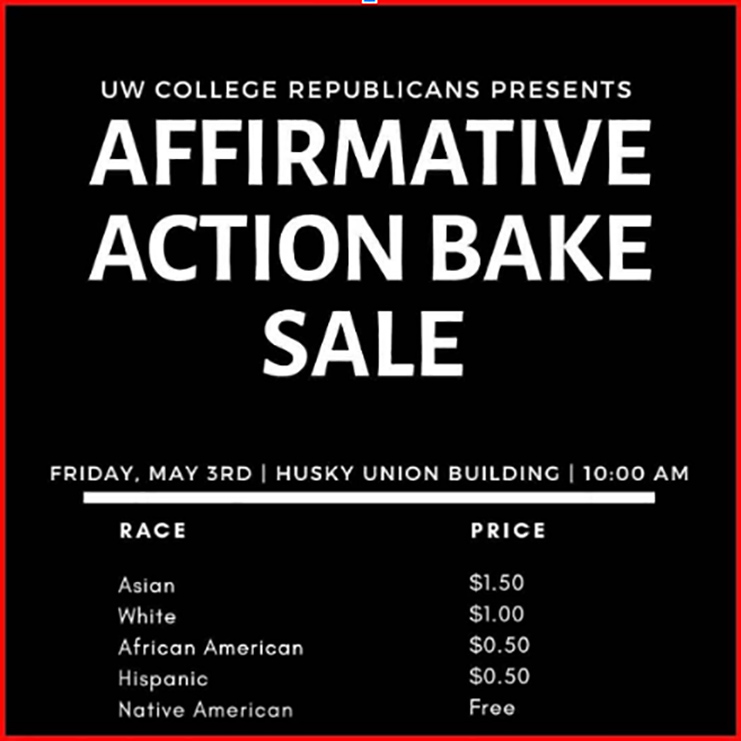 On May 3, the College Republicans at the University of Washington (RSO) held a bake sale on the UW campus. College Republicans identify themselves as conservatives. Through their organization, they would like to share their knowledge and support of conservatism on UW’s campus by providing events and opportunities for other like-minded students. All of this is done to promote their right to free speech.

The focal point of their bake sale was to provoke conversation and negative attention toward affirmative action. They began by making a public announcement through their Instagram page, calling all students and faculty members to come support their cause, a bake sale. What really set off students and others was the pricing of the baked goods. Prices were racialized, in a way, it is safe to presume, that reflected their perception of ways in which they perceive Asian Americans to benefit most from this policy.

While the prices are certainly triggering, this is an important time for us to examine the message behind the prices. But also, what does that really say about the political climate of a university that prides itself on inclusivity and diversity? While everyone is entitled to free speech, certain spaces should not be created to allow particular conversations to take place or exist.

Asian Americans have long served as a supporting argument for conservatives in their case against affirmative action. The bake sale pricing implies that White Americans are underprivileged under a race conscious policy, in the same political system that is built on colonialism and the oppression of ethnic minorities.
In response to this event, the Native American student organization, First Nation, organized and held a resistance bake sale.

The social media posts and responses the organization put forth the following days shed light on the fundamental problem of the way Asian Americans are viewed in American society. That as a whole racial group — one with well over 40 ethnic groups and 300 languages, who are generalized and way too often left out of America’s binary conversation of race, from Southeast Asians to Native Hawaiians and Pacific Islanders — we have achieved the American dream.

The truth is, the College Republicans generalization of Asians as a racial group perpetuates and gives life to the Model Minority Myth. It fails to acknowledge all the different ethnic groups that the student body is made up of, the colonial history their parents and grandparents have come from and how that has led them to settle in the U.S.), generational trauma, and the experiences of first generation API students without understanding access privilege and legacy of access. These two terms which work together to describe one’s ability to navigate a system and resources, such as applying to, attending and graduating from college.

So much of our lives and positionalities are dictated by policies that intersect various social categories. We musn’t forget the history and social movements that made it possible for a race conscious policy to exist. Affirmative Action makes it possible for different sectors of oppression and discrepancies that fall through the cracks to meet in the middle and become necessary conversations, while bringing equilibrium to a system that is institutionally discriminatory.

In the weeks and months to come, it is critical for us to reexamine the ways we facilitate conversations of race and policies in different social settings. While we love to celebrate the accomplishments from earlier generations of Asian Americans, we have to remember that their experiences, success, and failures does not encompass or depict the experiences of the current and future generations to come. It does not allow us acquisition of whiteness. Leaving APIs out of the race conversation is only preserving whiteness and, it’s direct association to the common American identity.

Tracy Thai is currently a student at the University of Washington. She is a 2019 spring quarter intern for the International Examiner.