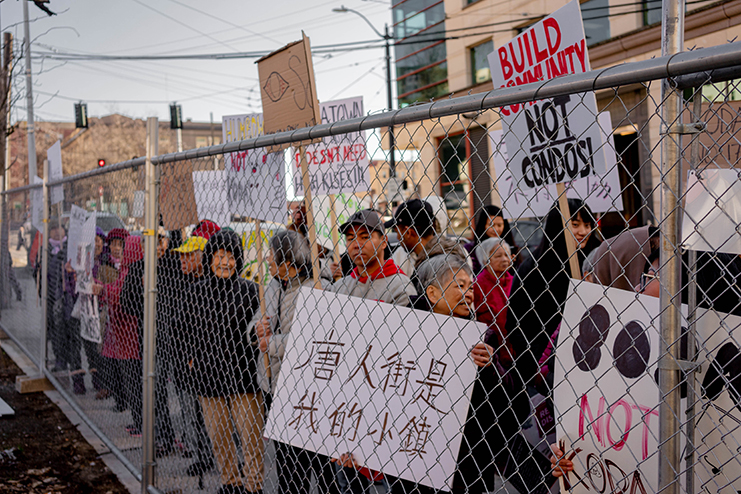 Early on a gray, drizzly Thursday morning in late June, I joined with 60 fellow community activists to protest the planned closure of the Keiro Northwest nursing home.

For 33 years, Keiro Northwest has operated a non-profit Rehabilitation and Care Center at 16th and Yesler. The nursing home was borne out of a vision of activists who mobilized the Japanese community to build a space to meet the cultural, social, language and dietary needs of their elders.

What community members were protesting that morning was the decision by Keiro’s Board of Directors to shutter the facility, along with homecare, education, transportation and catering programs that serve hundreds of community members every month. When Board members arrived for their meeting, we chanted outside and then walked in, peacefully disrupting the meeting. Activists described how the nursing home’s closure would be devastating to many elders, who would find it difficult to survive the transition to an unfamiliar facility unable to meet their needs. We applauded as advocates spoke passionately about how it was the Board’s obligation to ensure that the residents were not scattered to the winds.

Keiro’s impending closure is another example of the economic eviction that our working-class communities – including the communities in and around Chinatown/International District (CID) – are undergoing. Corporate for-profit developers, with the active encouragement of the political establishment, have visions of replacing community icons like the Bush Garden with very high rent apartment buildings. On the streets where working-class residents and retirees used to call home, corporate developers are erecting luxury-priced residences, like the KODA Condominiums, at 450 South Main Street in the historic Japantown, where homes are selling for as much as $1.4 million.

The construction planned and already underway is economically evicting working-class families, our elders and young people, and destroying the culturally rich and diverse CID community that was built with the blood, sweat and tears of so many people over the generations.

This is shameful, especially in the CID, where more than half  of the neighborhood’s current residents are immigrants, 37.3 percent live below the poverty line, and the median household income is just $29,418. That’s just over a third of the citywide average. We know that displacement harms people throughout the working class, and the hammer blows fall first and especially harshly on people of color, immigrants, LGBTQ, indigenous peoples and women.

Fighting this epidemic of economic eviction is the growing grassroots movement for affordable housing and renters rights. Groups like Humbows Not Hotels (also called the CID Coalition), Seattle Artist Coalition for Equitable Development, Seattle Asians for Black Lives, Pacific Rim Solidarity Network and #WeAreKeiro are fighting gentrification and displacement of working people, small businesses, elders, and low-income tenants from the CID. Help their organizing efforts by signing thecommunity petition circulating to save Keiro and the services for our elders.

My Council Office has been extremely busy in recent months, working with residents in Central Seattle who are being driven out of the city by soaring housing costs, like the working-class tenants at the Chateau building on 19th and Fir, many of whom are families of color. Because they got organized with the Tenants Union, my office, Be:Seattle, and other community allies, the Chateau tenants movement has already won victories, despite the clout of Cadence Real Estate, the corporate developer and owner of the building.

We are also fighting alongside immigrant and people-of-color-owned small business owners, like Saba Ethiopian Cuisine, who are facing the brunt of economic eviction by greedy corporate landlords. Through community solidarity, we have sent a strong message to Alchemy (the corporate owner that has evicted Saba) that we will fight to get Saba justice, including full relocation assistance, so that this beloved small business can stay in the Central Area.

As a member of the teachers union, I am also proud to support the members of UNITE HERE 8, the hospitality workers union, who have been negotiating for a first contract at Embassy Suites Pioneer Square Hotel since September 2018. The majority of workers in this hotel, on the edge of the CID, are people of color, including many Asians. They struggle to pay their rent and afford their basic healthcare needs while working for a luxury hotel. At a July rent control rally organized by my Council Office, Liza, a housekeeper from the Philippines, moved the crowd of 400 when she told them about having to move from Seattle to Auburn due to the rising cost of living. Our fight in the CID includes workers fighting to live in the city they work in. I’m delighted that the Embassy Suites workers took a recent vote to authorize a strike, and the results were 100% yes. They, too, are fighting for the right to live in the city, and they deserve the support of our entire community.

But we know that we cannot only fight this crisis one building, business, or union contract at a time. It is clear that the for-profit market has failed the CID, the Central Area, and our entire city. We need bold public policy to address our city’s affordability crisis and homelessness – crises that have worsened in the same period that Seattle has been the nation’s construction crane capital for several years running.

My City Council Office stands ready to assist workers, small business owners, tenants, elders, and all community activists in the CID, and throughout our community.

One next step we can all take is to join with renters, union members, faith activists, people experiencing homelessness, students, and elders on Monday, September 23 at 6:00 PM for the City Council’s Renters Rights Committee, where we will begin discussing draft legislation for rent control in our city.

Together we can beat back corporate developers and win a Seattle that is affordable for all – as long as we unite into a powerful, broad-based movement.

Kshama Sawant is a Seattle City Councilmember. She represents District 3.