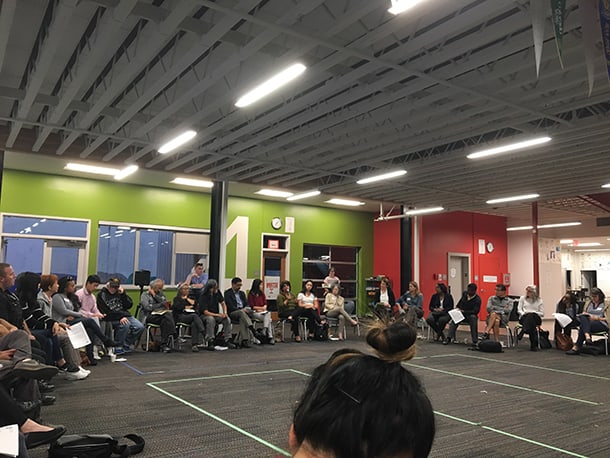 On Tuesday, September 26, the City of Seattle convened the latest in a series of overdue, yet meaningless efforts at community engagement regarding the Navigation Center homeless shelter. Once again, people have come to and left a meeting without feeling that the city is listening or responding to their concerns. For many of us who attended, it wasn’t much of a surprise. The City’s lack of concern for Little Saigon fits a pattern. At this point, considering what has happened at the past several meetings, it wasn’t a surprise that so few Little Saigon locals and business owners attended this one.

Looking back to previous meetings, we can see the pattern. At the June 9 meeting, many attendees with limited English ability were confused, because they had expected an opportunity to voice their concerns and have their questions answered. Instead, no one from the city was present. CID Public Safety Coordinator Sonny Nguyen and Friends of Little Saigon Executive Director Quynh Pham did their best to answer questions and present a contingency plan for dealing with the opening of the new Navigation Center, but it was clear that the local community was not ready to accept the fact that the City had gone ahead with this plan without answering their questions.

As if this were not enough, the June 29 meeting left the community even more upset. The City posted flyers around the area inviting us to a “Navigation Center Community Meeting,” which they also promoted as an “information forum regarding the new Navigation Center.” But when community members arrived they discovered that the event was actually a celebration of the opening of the center. Staff from the homeless  services organization the Downtown Emergency Service Center (DESC) were prepared to thank partner organizations, but were unable to answer questions regarding public safety from community members. The City essentially threw DESC under the bus and let them deal with the anger and frustration that has been building up.

For many of us, this last meeting felt like the last straw. The City arranged the meeting, but after all the build-up to it, the meeting landed with a resounding thud. When I was preparing to write this article I went back to review my notes from that evening, but I had barely written half a page, mostly noting a few things about the attendees, since the meeting itself was so devoid of meaningful content.

Part of the problem was the format. The meeting was conducted using a circle style. I have seen this style used very effectively for conflict resolution in small groups. And I mean no offense to any Native American tribe or culture that uses this format when I say that it was just not appropriate for this particular meeting. This was a public meeting with more than 60 people. Even when everyone had just one or two minutes to introduce themselves, that section still ate up more than an hour of our time. We didn’t need every single person in the room to introduce themselves. We needed a small group of individuals from the community to present collective grievances, and we needed to hear an actual response from the city government, including concrete and actionable promises for future engagement. Catherine Lester, Director of the Human Services Department for the City of Seattle, spoke on behalf of Deputy Mayor Hyeok Kim, but her presence provided little reassurance for the attendees.

I actually had a chance to speak with Deputy Mayor Kim at the Seattle JACL leadership seminar at Keiro Northwest the following Saturday, and I asked her about this issue. I really did want to hear her perspective on the issue before I wrote this, because I do have a great deal of respect for her. To me, she seemed to feel that there really was no value in having a real community forum on the Navigation Center, and the funny thing is, I do agree in some ways. It’s too late now, considering that the center is already running at capacity at this point. The time to hold that forum was a year ago. Deputy Mayor Kim tried not to imply that she was thinking purely in terms of benefit to the city, but in the end, I could not help feeling that this was what she meant. A larger community forum, she worried, would turn into a session of simply bashing the City, without much of a meaningful exchange of information. But perhaps this is also something the community needs—an opportunity to express its anger directly to its government. Maybe it would motivate the City to actually change its attitude, and do more to work with the local community.

Something else to note is that Quynh Pham and others at Friends of Little Saigon have been doing their utmost to maintain ongoing conversations with the City, but have been frustrated by a lack of reciprocation. The City’s response to FLS announcing the Navigation Center Community Response Plan was lacking, to say the least. (The plan is available here: www.thestranger.com/images/blogimages/2017/07/12/1499895215-nav._center_community_response_plan_6.30.17.pdf)

Having a homeless shelter is not the problem. In fact, we need innovative solutions to Seattle’s growing problem of homelessness, but the process of implementing those solutions needs to involve local community. Perhaps it’s an issue of government bureaucracy. Or perhaps it’s that our community, as always, is not really a priority.