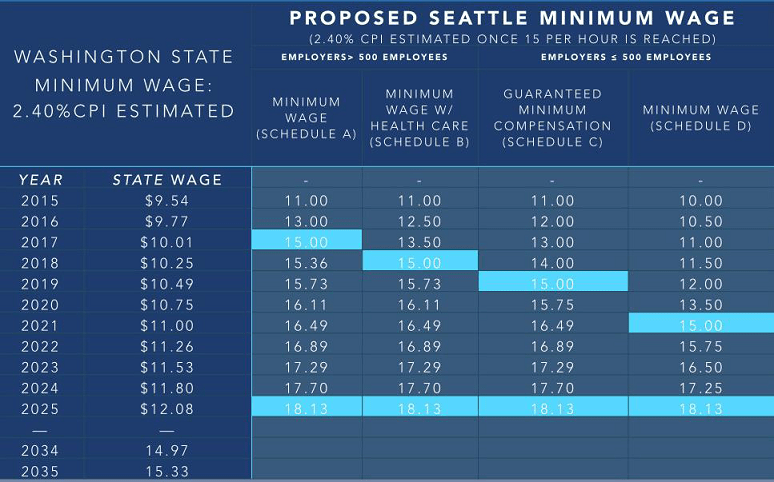 As an organization grounded in the aspirations of immigrant and refugee communities in Seattle and across Washington State, OneAmerica has carefully weighed the potential impact of a $15 minimum wage. The compromise proposal presented by Mayor Ed Murray last week is one that we can support. The concerns raised by immigrant business owners are real, yet the compromises reflected in this proposal address many of these concerns.

We also know that our work to ensure that immigrant and refugee workers and businesses can thrive in Seattle is only just beginning.

In more concrete terms, immigrant workers earning the current minimum wage today in a restaurant where they make tips and get healthcare would see their base wage slowly increase over seven years until they make $15 an hour in 2021, and immigrant workers at a clothing manufacturer in the Sodo area that make no tips but do receive health care would also see their wages slowly increase over seven years to $15 an hour in 2021. In another example, workers in an electronics store in north Seattle who make no tips and do not have healthcare would see their wages increase over five years until they made $15 and hour in 2019.

This amounts to a huge benefit for Seattle’s minimum wage workers who are disproportionately women, immigrants, and people of color.

Today, more than 100,000 Seattle residents earn less than $15 an hour, half of them are older than 30 and a third of them are parents. The cost of living has out-paced wage growth in Seattle, and we’ve seen firsthand how too many immigrant families and communities are struggling to keep up, and in fact falling further behind.

As a result of this proposal, nearly half of Seattle’s low-wage workforce would see a significant and immediate boost in their wages over the next two to three years, and during that timeframe, lower wage workers will have at least 100 million dollars more to spend in 2017 than if wages increased with inflation alone. And while this raise for Seattle’s lowest paid workers will be unprecedented, economic studies suggest that creating a new $15 minimum wage would result in a $526 million stimulus to low wage worker households in the Seattle region, and boost wages and increase consumer demand.

Still, there are real issues that a minimum wage increase cannot address on its own.

We are deeply concerned that it may get harder for immigrant and refugee workers with limited English skills to find jobs in Seattle, particularly in the short term. That’s why we’re advocating for new City investments in ESL programs in partnership with businesses that can lead to better employment options. Such a policy was part of the mayor’s campaign platform, and we must call on the mayor and City Council to follow-through on his commitment quickly.

We are also acutely aware of the challenges facing very small mom and pop businesses and start-ups in immigrant and refugee communities in Seattle, and there are a number of actions that the mayor and City Council could begin to address now. For example, the city could work with business and community leaders to simplify business licensing processes, establish targeted tax credits and provide technical support to such businesses for longer periods of time. The city could also work to establish low-interest or zero interest lending and financing programs, create or expand commercial insurance pools to help bring down business operating costs, and strengthen enforcement of existing minority contracting laws and regulations. The city could also help to market and promote immigrant and refugee business districts.

Seattle is poised to make a powerful statement about our commitment to addressing income inequality.

It’s time to raise wages, and it’s time to turn our attention to other policies that will ensure that our communities can and will prosper.

Rich Stolz is the executive director of OneAmerica, which was formed directly after September 11, 2001 in response to the hate crimes and discrimination targeting Arabs, Muslims, and South Asians. Called Hate Free Zone at the time, the organization expanded to organize and advocate with many diverse communities of color. OneAmerica has now grown into a leading force for immigrant, civil, and human rights.