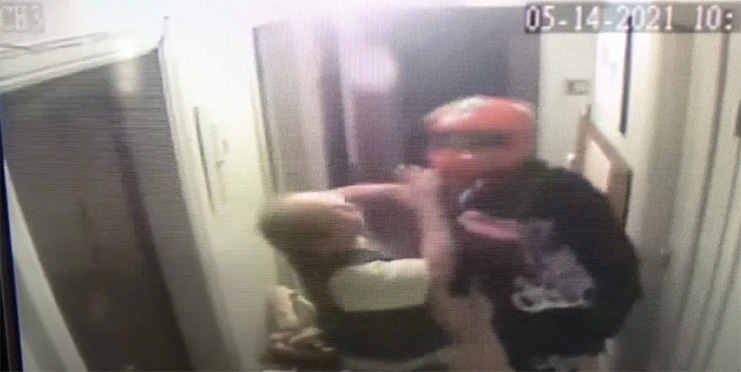 COVID-19 has led to a wave of anti-Asian hate and bias incidents as many of us are undoubtedly aware, and the Pacific Northwest is by no means immune to this trend. Yet, at the same time we have seen systems that are supposed to serve and protect us fail to do so and leave our communities still frustratedly wondering – what must we do to ensure the safety of Asian Americans, especially our elders?

On May 14, Gordon Shoji (father to Noriko and Joseph’s mother’s cousin) faced a brutal assault at the hands of Effendi Dean, one of two guests of a tenant, Maureen Karr, who resides in the unit in the building Gordon helps manage. Dean barged into Gordon’s apartment wearing a motorcycle helmet and padding, and used the helmet to viciously headbutt Gordon, knocking him to the ground, and he struck him again as he tried to stand up. He then kicked Gordon while he was on the ground, and yelled, “Can’t you see enough out of your tight eyes?” This all resulted in a laceration to Gordon’s head and a cracked rib among other injuries. Dean’s girlfriend, Janye Hobbs, the other guest of Maureen Karr, told the police that Gordon had assaulted Dean and that he supposedly had two broken legs and a shoulder injury, and instead of looking at the obvious facts of the case, the police decided to take a 78-year-old man’s cane as ‘evidence’ until the obvious truth came out.

For some time leading up to this, Gordon had tried to show kindness to Maureen, forgiving unpaid rent and declining to press charges against her for a previous incident, hoping that she had learned her lesson. He didn’t want to evict and press charges against a long-time tenant who was a struggling mother, but she decided to take advantage of this generosity. Gordon realized Karr was allowing Dean on the premises, where he and his friends were firing automatic weapons on the rooftop, and asked Dean to leave. But Dean refused and started issuing threats, including an intimidating note left on Gordon’s door, eventually culminating in this brutal assault.

In the end, it took the Seattle Police Department six weeks to arrest Dean, despite the clear evidence that Dean had committed an assault against Gordon. Dean was soon out on a relatively low bail amount, and his charges were briefly lowered to a misdemeanor before being properly raised back to felony assault.

Our family has also struggled to secure an immediate eviction of the tenants, who have continued to harass and threaten Gordon, yelling racial slurs at him with an amplified microphone, throwing objects at him out the window, breaking a door, and even cutting wires to the security camera. SPD has refused to provide the assistance needed to ensure Gordon’s safety, including a refusal to help with an inspection of the unit, as the property manager has concerns about the state of the unit and suspects Dean is still hiding illegal automatic firearms there.

Karr and Hobbs have both continued to reside in the unit despite multiple eviction notices and have not ceased harassing Gordon. On September 10, this escalated when Hobbs threatened to kill Gordon, and also said Dean intended to kill him. Law enforcement arrived on the premises, and Dean himself came to the site despite court orders to stay away. The SPD officer who arrived clearly had little understanding of the situation and only after extensive explanation from the property manager and the family’s lawyer did they once again arrest Dean. He is again out on bail, despite missing his previous court date and presenting an immense and immediate risk to Gordon’s safety.

As of the day of writing this, Karr and Hobbs still refuse to comply with the emergency three-day eviction notice, and SPD claims to be unable to provide any other assistance. Gordon’s safety is at risk as Karr and Hobbs continue to unlawfully reside in the building, and Dean is allowed to roam free, clearly with little respect for court protection orders. While the King County Prosecutor’s Office has taken our concerns with appropriate seriousness, they are not in a position to directly ensure Gordon’s safety as Dean’s prosecution moves forward.

Communication with SPD has been sparse and unhelpful, and Gordon has been left wondering if his case is simply not a priority for them.

Often in situations like this, Asian American families can feel frightened to speak publicly about what has happened to them or feel discouraged because of the lack of response from those in positions of authority, but Gordon and the rest of our family are determined to not take this lying down. In fact, Gordon in his whole life has taught us to not take injustices lying down. We will make it impossible for people in positions of power to ignore this incident and strive to empower others to ensure they can receive justice.

Our hearts also ache for the Cambodian community in Tacoma, where they are attempting to fight for justice for Ngunuon Huon, the Buddhist nun who was assaulted at the Theravadin Buddhist Temple. Attackers seem to think they can take advantage of the kindness and generosity of Asian community elders, but Asian Americans are not silent victims, nor are we a docile monolith that those in power can simply overlook. While we of course believe in progressive measures to protect tenant rights, and furthermore do not look to law enforcement as the solution to ensuring the safety of our communities, we must demand action to protect our communities.

We are demanding that the City of Seattle, Seattle Police Department, and King County take immediate and coordinated action to ensure Gordon’s safety and set a new standard for prioritizing the safety of our Asian American community members, especially our elders who have all too often been targets for bias-motivated violence.