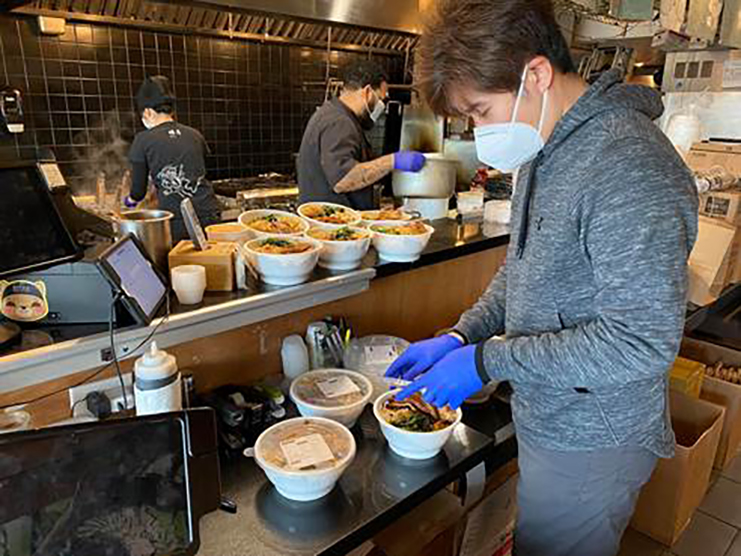 Brandon Ting, one of the founders of Kizuki Ramen and Izakaya, was on a tremendous clip to expand his chain of 12 U.S. locations when the shutdown effectively reduced his sales by 85%. He had to lay off 200 staff. Ana Castro, founder of Salvadorean Bakery in White Center, has been in operation for over 24 years. She laid off eight employees and has seen a 60% decline in business. Bo Hwang has been operating her Kawon Restaurant in Lynnwood for 19 years, saw a 60% decline in the first week. Last week the restaurant was closed until further notice.

Even prior to the shutdown Chinese restaurants were hit with 40% to 70% declines in what would have been their peak season due the stigmatization as over 30 groups canceled Lunar New Year celebrations. Minority businesses have been hit particularly hard with the Covid shutdown because of their high concentration in industries most impacted. In the Seattle metro area, Asian businesses with employees are 34% of businesses in Accommodation and Food Services sector in the last published Survey of Business Owners in 2012. All minority businesses are 44% of the category. The National Restaurant Association estimated that the entire industry would lose $225 billion in the coming three months and shed five to seven million employees. Already at the end of March, 3% of restaurants had permanently closed and another 11% said they would close in 30 days.

It is well known that minority businesses face many barriers in their survival. This doesn’t stem from lack of capability or motivation. Business success is tied closely to personal wealth which is inextricably tied to homeownership. Fifty years after the Fair Housing Act outlawed discrimination in housing, redlining or using race to deny access to lending has continued in mortgages, student loans, credit cards, and to businesses.

Asian families still continue to have a lower rate of home ownership (58%) than whites (74%) at the end of 2019. Egregious discriminatory subprime lending practices caused Black homeownership to drop 6% from its peak and Hispanic homeownership to fall 4% before recovering in recent years. The upcoming Covid-19 recession will undoubtedly wipe out any gains again. Black and Latinx household wealth are already only one tenth of white families.

According to a Federal Reserve study, Asian, Black and Latinx businesses are 50% to 100% more likely to face ongoing financial challenges such as funds for expansion and credit availability than white firms. Minority businesses are highly reliant on personal savings and personal loans to fund their businesses. Despite this significant disadvantage, minority firms have managed to grow a rates that far exceeded white businesses. 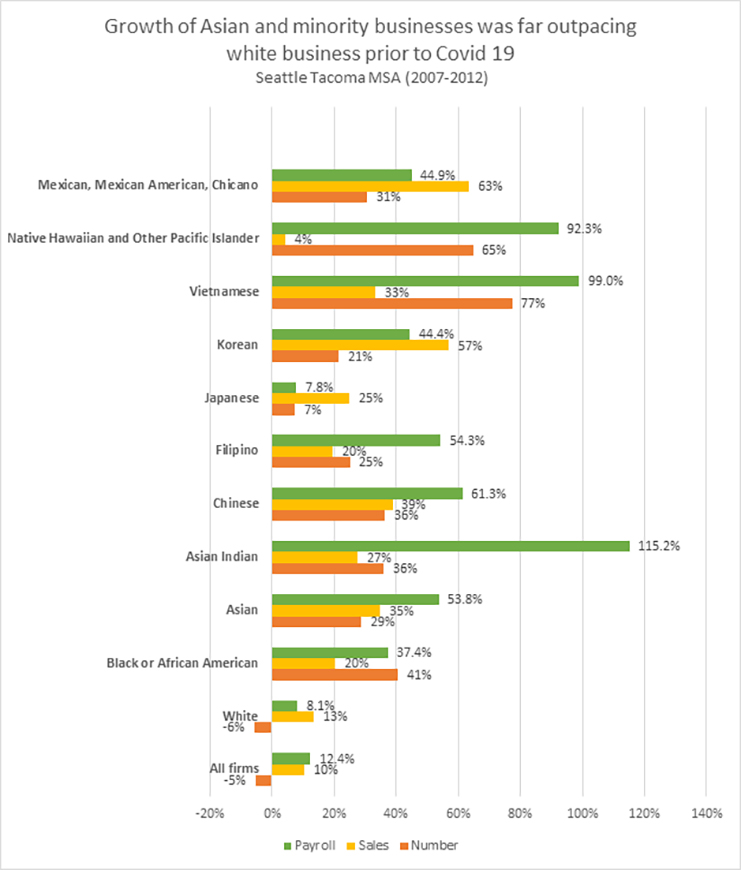 The food service industry provided a particular bright spot for minority businesses. Although restaurants are notoriously low-survival businesses, there are 41,000 Chinese, 41,000 Mexican, almost 19,000 sushi, 9,000 Vietnamese and about 5,000 each of Thai, Korean and Indian restaurants in the US. These are predominantly independent businesses and far outnumber any one of the restaurant chains.

Starting a restaurant that served its own community was a viable way for recent immigrants to survive in their early days in America. However, growth has been driven by the mainstream’s market interest in authentic cultural experiences and good food. According to Technomic, seventy-seven percent of Americans eat ethnic food at least one a month and thirty-eight percent order it weekly. Millennials tend to be the most enthusiastic about indulging in this food culture.

Yet, the shutdown threatens minority businesses much more because of their lack of access to capital. David Chang, the chef who is doing much to elucidate the connection between the history of racism and food, fears that “there is going to be a morbidly high business death rate. My fear is the restaurants that survive are going to be the big chains, and we’re going to eradicate the very eclectic mix that makes America and going out to eat so vibrant and great.”

Brandon Ting, Ana Castro and Bo Hwang have applied for disaster relief under the CARES Act but have encountered confusion and delay. None of the businesses received funding in the first round and now are waiting to see if they are approved for the second round of $350 million. Forty percent of the money given out were over $1 million which suggests it went to larger companies with established banking relationships who were most like able to get money from other sources such as Shake Shack which just returned their $10 million to the government.

Covid 19 has brought out the stark disparity in access to healthcare for Black and Latinx with mortality rates at two to three times their population proportion. With the dysfunction in getting funds to the businesses who most need them, there is no doubt that the same impact on survival will be felt in minority businesses.

Leslie Lum is an instructor at Bellevue College and is a board member of the International Examiner.