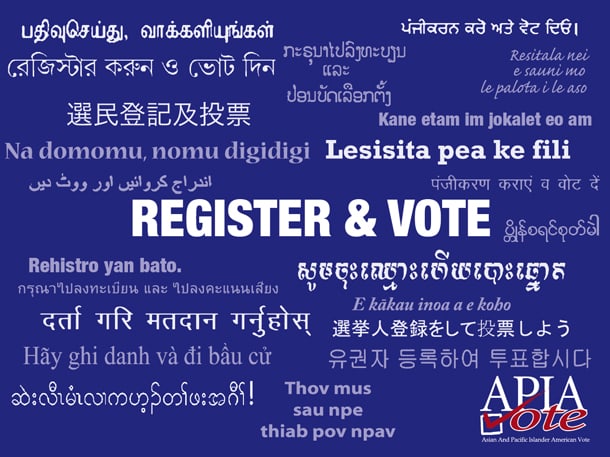 Our APIA Community has a long history of activism to increase our political power. In the 1960s, ACE (Asian Coalition for Equality) sought to create affirmative action programs inclusive of APIA communities. Recently-departed Ruth Woo, our beloved political godmother, was a one-person APACE from Governor Dan Evan’s administration in the ’60s onward for our community. Anyone who was interested in elected or appointed political positions first sought her wise counsel and support.

In 1997, APACE (Asian Pacific American Coalition for Equality) formed the state-wide APIA coalition to join other communities of color, women’s organizations, and national organizations to oppose the passage of I-200, an initiative to end affirmative action in Washington state. At the end of the campaign, APACE had a membership of over 24,000 individuals and organizations across the state of Washington. The APACE No!200 campaign was a 24-7 grassroots effort to fight for the continuing need for affirmative action.

Knowing the need for a sustained organization dedicated to the political empowerment of our many diverse APIA communities, APACE continued until the early 2000s. Other coalitions such as APIC, R.O.A.R (Raising our Asian Representation), and APIA Vote-WA developed to continue building our political power.  Every election season, different parts of our communities would join campaigns for APIA candidates or work for legislative initiatives under various names. We would gear up, work hard, and then dissipate until the next election. A candidates-forum was organized every year since by various groups of APIAs to educate our communities about the candidates and the issues on the ballots.

In 2006, many of these same electoral activists would mount voter turnout activities to increase the political voice of our often-overlooked communities with funding received from national AAPI organizations such as APALA or APIA Vote. In 2008, the first PAC was formed by Albert Shen and Jeffrey Hattori. In 2010, the current iteration of APACE (Asian Pacific Islander Americans for Civic Empowerment) was launched as a sustained political AAPI organization for our ever-growing population. We formed three separate organizations, a C3 APACEvotes, a C4 APACE, and an APACE PAC. We began with C4 work, endorsing candidates, translating candidates’ brochures, doing in-language phone banks and ballot parties. We held workshops on voter registration, political campaign strategies, and raised money for our endorsed candidates.

In April 2011, we organized a conference, “Taking the First Step: APIAs and Public Leadership,” together with the Progressive Majority, Seattle University School of Law, and People of Color for Progress.

In 2012, APACEvotes began to receive regular funding from APIA Vote for non-partisan voter registration, education, protection, and turnout. Our funding increased many-fold in 2014 with a capacity-building grant from the Progress Alliance of WA and the National AAPI Civic Engagement Fund to hire a full-time program manager in October 2015. The three Boards of Directors number 24 officials and are intergenerational, ranging from ages 21 to 70, with many skills and talents. Our Community Advisory Board includes elected officials and former board members. The vision ahead will take time to fully create, but we are now well on our way:

“Our vision is a just America that assures social, economic, and political equity for the diverse Asian Pacific Islander American Communities. We see active and powerful APIAs who fully participate in our democracy, that are well-educated on the issues, and informed of the political process.

“We transform our democracy by politically engaging and empowering the APIA community, and holding ourselves and our leaders accountable to progressive values of social, economic and political justice. APACE increases access and participation in electoral and civic affairs by registering, educating, protecting and turning out Asian and Pacific Islander American voters.”

Well aware that there are many perspectives and memories about any history, in this article, I hope to capture the vision and purpose of the current manifestation of APACE (Asian Pacific Islander Americans for Civic Empowerment).

Akemi Matsumoto is a Founding APACE Board Member