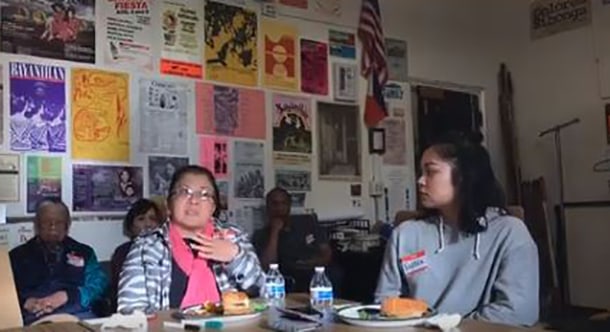 The following is a commentary on Alex Tizon’s The Atlantic story, “My Family’s Slave.”

As a young historian, I take time to revisit scenes as they were in old Seattle.  Often I try to compare current events to past ones.  I’ll also imagine them locally with notable people. In my passing thoughts on the 1950s, I saw a brown guy who was stumbling in town on a damp day of light fog and drizzle.

His breath was labored. He had a lung disease. What little air he had felt extra thick and caustic. The usual bogged aroma of nearby mud on Yesler street barely had a scent for him. The man slowly slumps to the damp ground. One foot goes forward, a dropped knee slides, his face slaps in the pavement—there lay another dishevelled street pauper.

Some say Carlos Bulosan was found on the steps of City Hall. I like to believe that my fellow Ilocano man’s struggling steps may have been for one last trip to the library.  Bulosan’s obituary printed on September 13, 1956 reads less romantically, his last gasp was at Harborview hospital on the 11th. Carlos’ life was noted as being a writer of incomplete works, and a child of Philippine peasants.

Other writers since then have made their lives and struggles in Seattle. The late Alex Tizon was one, too. In contrast between Bulosan and Tizon, the former is an old hero, and the latter a new pariah. Tizon has shocked us recently with a written history on his own family’s experience with Philippine peasantry. His latest and final Atlantic piece is titled “My Family’s Slave.” If you’ve read it, you’ll know about the three generations of his family that exploited a girl in poverty across two countries. Her name was Eudocia Tomas Pulido. More intimately she was called Lola. His family’s livelihood and affluence were lifted on the back of her cultural bondage as a Filipina katulong servant. She served them through adulthood, beaten and unpaid. Without excuses, she was a house slave. Tizon writes of his Lola Eudocia: “She wasn’t kept in leg irons, but she might as well have been.”

The Pacific Northwest’s Filipino American community has expressed denial, shock, anger, revulsion, and compassion at Tizon’s personal story. Many Filipinos I have spoken with in recent days protest by saying that they have treated their own katulongs warmly and fairly. Others indicate that bondage exists in Filipino society because the West ingrained it into Philippines culture. Yet we forget that there were traditions of indenturement inside the islands before first contact. And Filipinos also speak with firm indignation when Black Americans point in dismay at Tizon’s story and the cultural practice of servants still used by Filipinos. To that I say, “Yes, let people criticize us.”

It is a terrible duplicity that we carry when we proudly shout and admire the writings of Carlos Bulosan while intentionally ignoring the prose and complicity of Alex Tizon. It is a subjective arrogance I see when we choose one writer’s highlight on American injustice and fail to feel the memoir of Filipino family crimes against humanity presented by another.

Whether or not katulong servants are culturally distinct and different than chattel slavery does not avert from the fact that it is still a form of exploiting people in poverty. I feel that the truth is, we admire Bulosan because he says idealistically that America’s dream is in our hearts; yet Tizon is derided because he reminds us pessimistically that Filipino hearts are still clutched by nightmares.

Culture has bad and good elements. For those of us who understand and live in two worlds, especially us Asian Americans, we must decide. Choice is a privilege afforded to us by wealth and American expression. Knowledge is a privilege. We have received and champion the values of feminism, equality, human rights, and environmentalism exposed to us. These values are not exclusive to the West, but we do have the liberty to express them in ways not allowed elsewhere.  Culture is not static. Filipino culture is not untouchable, as much as American culture is not. I would ask that people concerned in the wake of Lola’s story not fear the shame of an imperfect cultural practice. Instead, reveal the bad for what it is.

During these past days since the tragic story was published by The Atlantic, we have been confronted by Tizon’s unsettled soul and Lola’s bittersweet fortitude. Like Tizon, the complexity of cultural obligations, modern morality, and generational shame have confused and frustrated me in my recent personal reflections. I don’t feel the hopeful poetry of Bulosan anymore. I feel the fallen muck my Filipino forefathers stood on with their katulongs and utusans at their feet. I am not questioning the validity of non-Filipino arguments anymore. Instead I am looking at the ground. I am looking at who’s back I am standing upon in America. Did I have advantages because my family katulongs afforded us privilege? Am I standing on Bulosan’s body?

Lola Eudocia is one among many at the bottom that our world uses in its structure. We stand on the class platform above them. No matter how much time has passed, and how much modern refinement we cultivate, we have not yet cleared away the past culture that entangled us. The people who are left exploited must be sought out, and the katulong practice that we have endeared must be refashioned.

First, we must lay down in humility and find those on the ground who we have not acknowledged are put down serving us. Even Alex Tizon realized this duplicity in his life, if anything his love and regret for Lola are a call for us to fall on our pride and remove this shame. Tizon and Bulosan both saw what was happening at the bottom to people.

“When they are gone no moon in the sky is lucid enough to compare with the light they shed when they were among the living.”