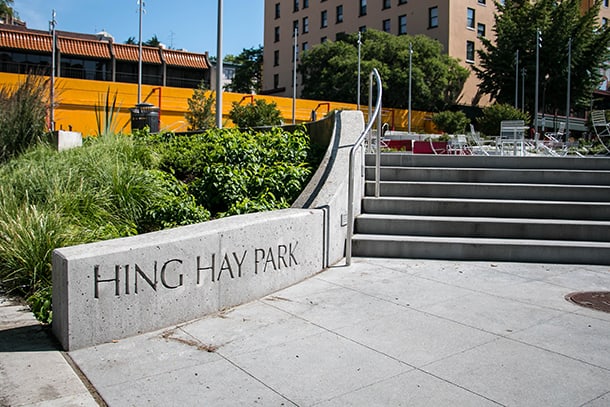 Seattle can now celebrate and experience the new expansion of Hing Hay Park in the International District. After receiving a budgeted $3 million for a parks renovation in 2008, and the old Post Office moving in 2014, the park now spans the entire length of the King Street’s north side. Multiple delays in the process may have increased the cost, but that hasn’t been brought up much, from what I’ve heard in the community. All that we’ve seen so far are people lounging with their dogs along the pristine walkways, and children chasing flocks of birds in the new open spaces.

If you look a little closer at the park you may see something different. A contrast of sorts exists now. The beautiful red steps of the new west side of the park have recessed lighting that outline a motif of Asian dragons and other zodiac animals. The dingy brown bricked area on the east end of the park holds the random litter and cigarette butts of rough locals.

Cheerful seniors use the shiny new exercise equipment as a part of their daily fitness now. Listless greyed men use the shadows behind the World War II memorial to get drunk on rice wine.

Active teens skate and parkour enthusiasts sweat their acrobat moves across the pristine curving walkways. Dishevelled people of the street defecate alongside the trees and bushes. All of the public in its many forms of life use the public park in an amazing multitude of ways.

Maybe we can be glad that the park has expanded. Now there is room for the regular people and the street people we have deigned to forget. Local coalition All Home revealed that 11,643 individuals were experiencing homelessness in King County in its “Count Us In” homeless count on January 27, 2017. Homelessness disproportionately affects people of color—approximately 55% of individuals experiencing homelessness in King Count identified as people of color. The “Count Us In” report also found that 1,329 individuals identified as veterans, 2,833 were in families with children, and 1,498 were unaccompanied youth and young adults.

Homelessness has exploded here, but thanks to our city this Hing Hay Park has expanded so that there is now space for the regular people and homeless people alike. It’s a square deal, they get a park and we get a park. Of course we get the nice part of it.

Seattle is overflowing with as the fastest growing city in the nation. Choice neighborhoods like Capitol Hill have reached a new median home price of $997,000. As word gets out about the park and all our great restaurants, the Chinatown International District can become a new bastion of hipness and homelessness. For just $2,305 a month you can rent a brand new 1 bedroom/1 bathroom by Weller Street.  If you can’t afford that, you can get 1 bush/1 rock for free in the ignored part of Hing Hay Park.

The new Hing Hay Park will offer movies in the park, with my favorite being Moana at the end of July.  I can also walk 40 yards up the street and see daily public intoxication at the old part of the park. I can’t wait to teach my children how to enjoy the best of what the city offers and turn their heads at the dark part of town.

Hing Hay Park is a microcosm for the Emerald City. Abundant cultural activities and diverse interests cross paths to create a wonderful world city pastiche. With growing middle class incomes becoming common at $200,000, we can rise more and increase our behavioral distance from those who couldn’t cut it in this booming city economy with blistering rental price increases.

With so many things changing, and so many old neighborhoods becoming newly approachable, I don’t have to worry about the kind of public health crises that income disparity is causing. I can just go to the park (the nice side), and sip on my bubble tea while chatting about the new poke fish flavors across the street. The park is a beautiful and endearing addition to the Chinatown International District, I hope that everyone in Seattle can enjoy it this summer.