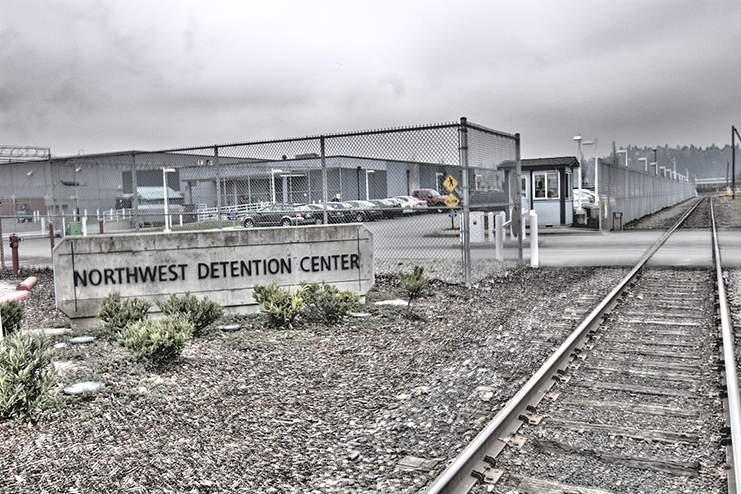 I am a detainee at the Northwest Detention Center (now Northwest Processing Center). I would like to share how your government is treating immigrants who want better lives for our families. America is made of immigrants. Donald Trump is a descendant of an immigrant. Melania Trump is an immigrant from Slovenia.

Anti-immigrant Americans and Trump supporters believe that immigrants steal their jobs. The fact is that we are hard workers, working to support our families. We work as farmers, janitors, senior caretakers, sanitation workers, etc. Jobs that many Americans don’t want.

Immigrants living in America establish families here. They choose America because they believe in fairness, freedom and community. Being deported is similar to a life sentence. We have to leave our families behind, especially our American children. This system leaves families broken.

The worst part of detainment is the suffering caused by being separated from our families. I talk to my child, but I cannot hold, kiss, or hug him. When he gets sick or feels uncomfortable, I cannot be there to comfort him. Listening to him crying and calling “Mommy, help!” is one of the harshest punishments that detainees endure. We all face the real crisis that we might be separated from our families.

I spend $300 a month to communicate with my family. A video chat costs two cents per minute. I have been away from my 3-year-old child since he was 2 months. We have a strong bond because we communicate every day. Please look at the situation! We make the American corporation, Telmate Corp., rich with these calls.

Our families and friends can deposit money into our accounts. Every $20 deposit costs $4. All items in commissary through Keefee Corp. are from Dollar Tree. Detainees pay double or triple the price of every item they sell here at NWDC. Here one Top Ramen costs us 57 cents. At Dollar Tree, you get five for $1.00. A shampoo costs $4.95 + tax and fees. In this way, our imprisonment contributes to the your economy.

We are in ICE detention for a civil matter, but we are treated like criminals. Being in holding cells (for “security purposes”), doing nothing for hours makes people here anxious and depressed. It is well documented how segregation terrorizes a person’s mental health.

Placing us in a holding cell with nothing to distract our minds is the same as placing people in segregation in prison. In fact, officers at NWDC repeatedly told me, “this facility was like jail”.

We are forced to wear used clothes. This includes panties, socks, towels, etc. When we ask “What about athletes foot? Or periods?, the facility’s explanation is that the clothes are washed. Who would wear those items used? Not the officers. Not the GEO or DHS or INS employees. In fact, multiple officers have told me that they would never use those items, ever.

Do not let GEO’s handbook and video fool you. We are not served foods in buffets or a cafeteria as they show on the video. Our food is served on a tray into our units like in prison. We have often been served moldy food and food with worms. I was served moldy eggs. On Thanksgiving, moldy turkey was served. In November 2019, a detainee had a living worm came out of her food tray. In December 2019, a detainee found a dead fly in her lettuce. If an American were served food that was rotten, moldy or infested, they would call the Health Department and there would be an investigation. When we get those foods, the officer simply gives us another tray. Obviously it traumatizes us. The officer writes “Refused” like the detainee does not want the food. We have no-one outside to call and report this.

We don’t go to Medical because the doctors don’t help us. Most of us are constipated, myself included, but instead of changing our diet, the doctors prescribe fiber pills and other medications that mostly don’t work. There is an 80-year-old grandmother who suffers from many pains associated with old age. The doctor gives her a shot to temporarily relieve pain, but the shots don’t work.

At GEO Corp., Inc. detention centers, there is no separate unit for people with mental health issues. On at least 3 occasions, I have seen detainees get physically and emotionally abused by other detainees with mental issues. Detainee, Karina Dawson was slapped. Another detainee got hit on the head with a trash can.

When Americans complete a criminal sentence, they rejoin the community, attend treatments and rehabs. Immigrants who make mistakes are considered a danger to the community and threatened with detention. It does not matter how many classes they attend to better themselves or that the community has forgiven or how desperate their families are without them, they still can’t have a second chance. Don’t Americans always say, “We believe in second chance. We believe in rehabilitation? In family and community supports”?

Here in King County, WA, an American who had 72 convictions was released and later poured coffee on a stranger’s toddler. The judge gave him a 73th chance to go to treatment. He then escaped from the treatment’s facility. Immigrants don’t get second chances. This is discrimination against our race, origin, and color. Immigrants who get in trouble with the law have more to lose than Americans. We know that if we mess up once, we can lose everything.

It is a waste of taxpayer money to continue to detain people. Even if we will eventually be deported, it would cost much less money if we were allowed freedom to take care of our children and properties before. It is important for us to do the right things; attend court hearings and follow ICE requirements. We want to be great models for our children. We would not run away from the system that would give us a fair trial and proceeding. People, who cross the border, turn themselves in at the checkpoint because they want legal status to live in America. There is no reason for them to run from the system. Who wants to play hide-and-seek with the authorities their whole lives?

If nothing I mention above matters to you, I bet money does. To detain a detainee costs about $3,270 per month. I have been in here for 11 months. It has cost close to $35,970 just to detain me. And there are people who have been detained for years.

We want you to realize that we are also humans and have human rights. This is not the American dream we dreamed of when we left behind everything in our countries to come to America.

This letter is a point of view of a detainee, Tien Ho, who is currently detained at Northwest Processing Center (aka Northwest Detention Center). She is an immigrant mother who has been detained. All she wants is to be reunited with her family in Washington.