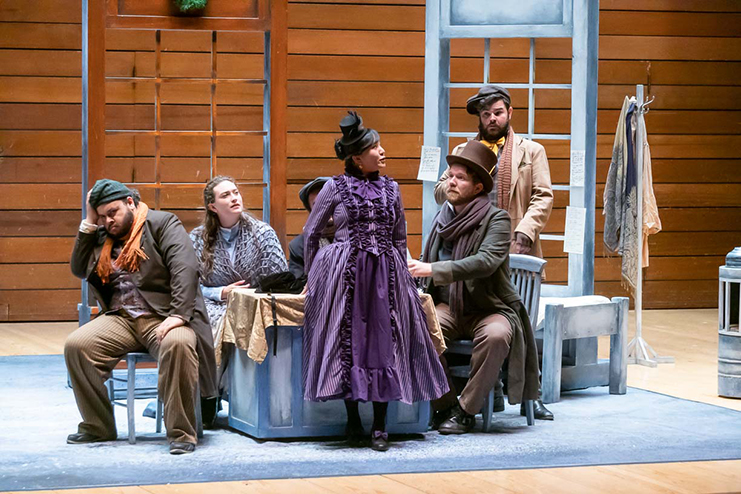 Portland Opera places a strong emphasis on outreach and education, and the prime example of this is its program Portland Opera To Go, or POGO. This program shortens traditional operas to just under one hour and translates them into English, and then takes these productions into schools in Washington and Oregon in order to make opera more accessible to students in 7th to 12th grade.

This autumn, POGO is producing Giacomo Puccini’s La Bohème, and opera performer Ivy Zhou will perform the soprano role of Musetta, a young singer who is hoping to reclaim the affections of her former suitor, the painter Marcello. “I was excited to sing some beautiful Puccini,” Zhou said, “and to tackle a role that felt like a good fit for where my voice is headed.”

The importance of vocal progression is key for opera performers. “Young opera singers often have to plan our careers in order to protect and grow our own voices, meaning we say yes or no to role offers as they feel appropriate or not for our physical vocal development,” Zhou said. “We don’t want to outpace ourselves with the roles we accept, as it can actually cause vocal damage, but we do want to constantly stretch ourselves vocally or dramatically.”

Performing with POGO also feels like a natural fit for Zhou. “I have had a relationship with Portland Opera for three years now,” she said, “starting with being hired in 2016 to sing Gretel in that year’s outreach production of Hansel and Gretel.”

The role of Musetta is certainly a departure from roles like Gretel. “I love that Musetta is full of life and love,” Zhou said. “She is the life of the party, the glue that holds her friend group together, and she is passionate.”

These characteristics offered Zhou a wide range of options in how to portray Musetta. “I have seen a lot of Musettas played like Carmen, with a lot of va-va-voom, femme fatale energy,” Zhou said. “That is not me at all, and if the director had wanted to go in that direction, it would have been a fun challenge.”

Zhou describes her passion for singing as linear. “I have been singing since I was a baby, according to my parents, anyway!” she said. “Like many singers, I started out in church and school choirs, and got bitten by the musical theatre bug in middle and high school.”

Once in college, Zhou became more dedicated to training her voice. “I started seriously studying classical voice my sophomore year of college,” she said, “and went on to get a masters of vocal performance and pedagogy.”

But despite her passion for singing, Zhou didn’t feel comfortable pursuing a professional career in the arts. “My bachelor’s degree is in public policy,” she said. “In between college and graduate school, I worked for a year for a non-profit called World Relief, specializing in refugee resettlement.”

It wasn’t immediately apparent to Zhou that the arts could help others in the way that non-profit work could. “As a service-minded adult, I needed a lot of convincing that going into the arts was actually a worthwhile use of my life,” she said. “It wasn’t until I saw the social importance of telling human stories onstage, and imagining a better world through theatre, and also representing Asian American identity on stage, that I was comfortable deciding to pursue opera as my career.”

Even after Zhou committed to this new career focus, the nature of opera performance poses mental and emotional challenges. “There is the psychological wear and tear,” she said, “of constantly parsing through feedback, persevering through rejection, and learning from, but not becoming overly jealous or competitive with, colleagues in their success.”

And as with any career in the performing arts, opera is filled with uncertainty. “There is always someone 10 steps ahead of you, you are never sure if it this be your last gig, and we do have to keep up the continuous hustle to find new work in a way that people with mainstream careers don’t have to do,” Zhou said.

In response, she has developed strategies for success. “I grew up with an entrepreneurial mom, and I think that normalized the lifestyle of constant searching, and networking, and expanding, and creating self-made opportunities,” she said. “It keeps life interesting!”

Zhou also expresses gratitude to those who have helped her. “I have had very wise, supportive friends, singers and otherwise, who have walked alongside me in this career path,” she said. “I credit them for my sanity and emotional balance.”

And looking ahead to 2020, Zhou continues to keep a service-oriented perspective dedicated to helping children. “After POGO ends in December, I return to Seattle to sing the title role in the west coast premiere of Earth to Kenzie, Seattle Opera School Opera Tour’s spring show,” she said. “This is an important piece addressing child homelessness, co-commissioned last year by Seattle Opera and the Chicago Lyric.”

She will also share her talents with adult audiences next year, performing the role of Phyllis in Gilbert and Sullivan’s Iolanthe with Tacoma Opera during April, 2020.

La Bohème is presented during Fall 2019 by Portland Opera To Go at schools in Oregon and southwest Washington. To schedule, contact Alexis Hamilton: [email protected].