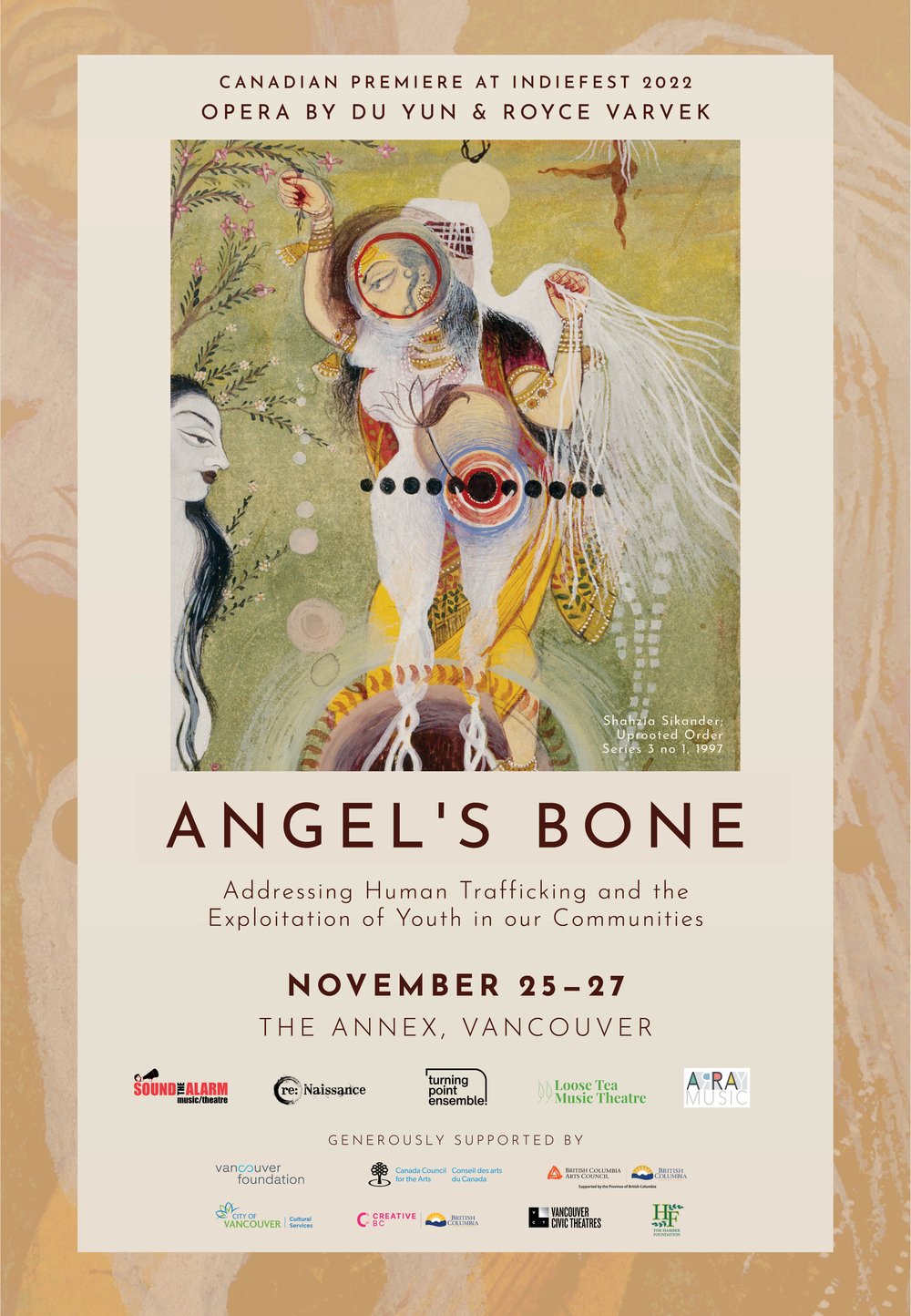 In 2016, composer Du Yun presented her opera Angel’s Bone, created with librettist Royce Vavrek, which tells the story of two angels who descend to earth, only to be forced into spiritual and sexual slavery by an impoverished couple. Now, as part of IndieFest, Vancouver’s re:Naissance Opera company will present the Canadian premiere of this work that explores contemporary human trafficking (tickets can be purchased here).

re:Naissance Opera’s Founding Artistic Director Debi Wong feels a personal connection to Angel’s Bone. “I was first introduced to Angel’s Bone in 2014, when I was invited to sing in a concert reading of the work at Prototype Festival in New York City,” Wong recalled. “I felt very green at the time and I was still figuring out how to manage a freelance career as a classical singer.”

But this experience working with Yun changed Wong’s perspective on being an artist today. “The music defied all traditions and rules of classical music and the story was fiercely contemporary, challenging the audience to look closer at the power dynamics in our societies and how they perpetuate issues like human trafficking,” Wong said. “Angel’s Bone helped me understand that the performing arts are a powerful tool for engaging communities in pressing conversations.”

This realization led Wong to develop the re:Naissance Opera and create the IndieFest as one of its primary projects. “IndieFest especially exists to showcase genre-defying works that amplify the stories of those who have been overshadowed by history and traditions,” Wong said. “At IndieFest 2022, we are featuring artists and works that are really redefining the future of storytelling. Angel’s Bone has set a powerful precedent for that.”

re:Naissance Opera is managed on a system of lateral leadership, and Angel’s Bone is co-produced with Sound the Alarm Music/Theatre, Loose Tea Music Theatre, Arraymusic, and Turning Point Ensemble. “Every aspect of the development process for this project has been designed and carried out in collaboration with Brenda Lochhead, a community support worker with Family Services of Greater Vancouver and embedded support worker in the Counter Exploitation Unit at the Vancouver Police Department,” Wong relayed. “She really helped all our co-producers understand the underlying systemic issues that perpetuate child and youth trafficking and sexual exploitation.”

A primary factor in this exploitation is the powerlessness of the trafficked youth. “We especially spent a lot of time learning about and discussing power, like who holds the most power in our societies and how power and agency are afforded to people in our societies based on gender, race, age, socio-economic status,” Wong shared. “After having these conversations, we realized that if we want to effect change in our communities, we also have to address it in the rehearsal room, on stage, and in all aspects of this project.”

Collaboration is key. “Some of the big changes from a typical rehearsal room or opera process include the story and overarching narrative being first shaped by our social context committee, a team of social workers and activists who work to educate and raise awareness about human trafficking,” Wong said. “Our lateral leadership model lets us understand how complex issues cannot be addressed in silos; that all perspectives are needed and collaboration amongst people of diverse lived experiences is essential.”

But, however rewarding, teamwork isn’t always easy. “Our biggest challenge was making sure that we were investing the proper time needed to build trust and understanding amongst our leaders,” Wong said. “When things get busy, it’s so easy to fall into old habits.”
So Wong relies on her initial inspirations almost a decade ago. “Du Yun is such an inspiration as an artist and a human,” Wong said, “and I’m lucky to have kept in touch with her since that first workshop of Angel’s Bone in 2014.”

Now, re:Naissance Opera is following in Yun’s footsteps. “Every performance of Angel’s Bone will open with a short conversation about some of the themes we hope the audiences can think about while they experience the story,” Wong said. “We will close each performance with a Q&A for audiences that want to know more about the story, the production, or the issue of child and youth trafficking and sexual exploitation.”

Angel’s Bone runs on November 25 to 27 at The Annex, 823 Seymour Street, Vancouver, Canada. Tickets can be purchased here.