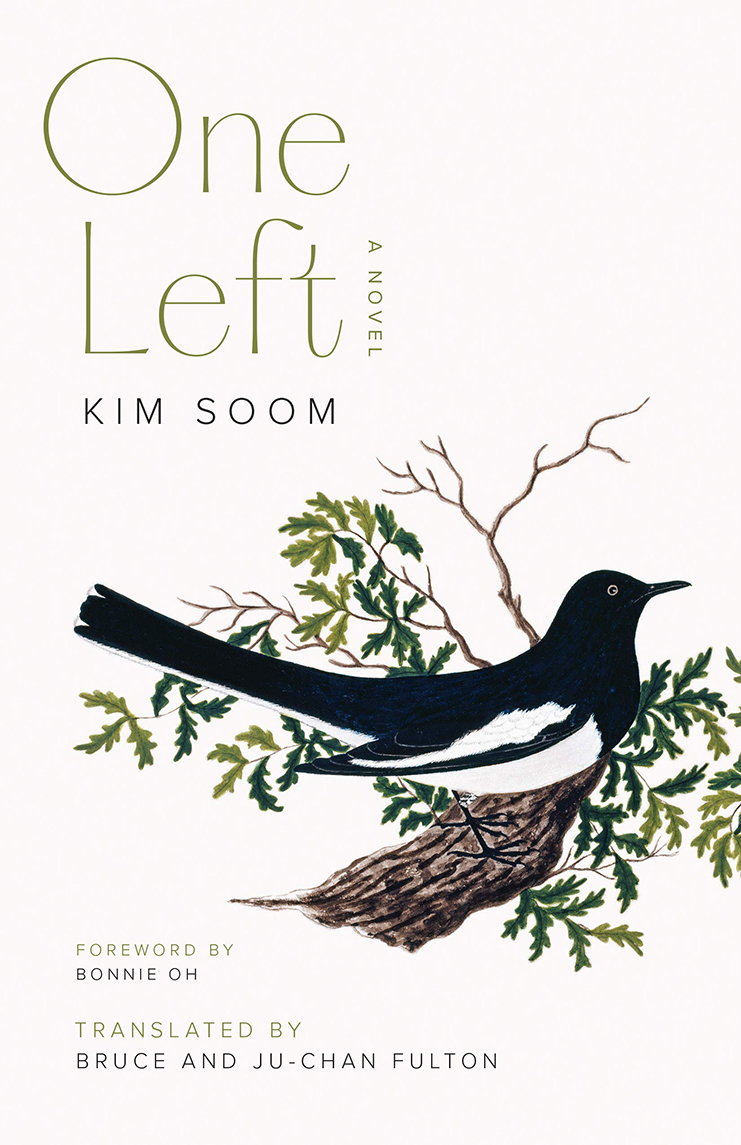 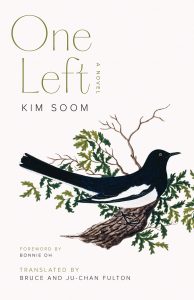 Throughout the course of her life, the protagonist of Kim Soom’s One Left has been known by many names. In the novel, however, she is simply “she” or “the woman,” an unremarkable, single, 93-year old woman, waiting away her final days.

On television one day, she hears that the “last one” is dying — the last known woman to have been kidnapped and forced into sexual slavery for the Japanese army during the Pacific War. The last so-called comfort woman. Anxiously, she scans her memory, reciting the names of those who she knew during her own time at a Manchurian comfort station. Like a chant, she has recited these names for 70 years, lest she forget even one of these women.

One Left, first published in 2016 in South Korea, is a landmark — the first novel dedicated to depicting comfort women, a topic that invokes as much weariness as it does outrage among today’s public. Though a work of fiction, Kim Soom’s story is based on exhaustive research and testimonies given by actual comfort women — at least the few who have survived (it is estimated that only 10% of these women lived past the war) and publicly acknowledged their experience. Few are wont to do so. On top of the agony of living with this trauma and its physiological and psychological aftereffects, they are marginalized by a society that would just as well forget their existence. By rendering this topic in the form of a novel, Kim injects a new sense of emotional urgency in recognizing these very real and hauntingly painful experiences. As translators Bruce and Ju-Chan Fulton remark in the afterward, “not until we are confronted with the direct evidence of a disaster…are we forced to acknowledge the magnitude of the trauma and urgency of the need for healing.”

The woman was 13 years old when she was taken away. The oldest girl of her family, she was sent to the marsh to gather snails when she was grabbed by two men and put on a northbound train. On the train she meets other young Korean girls, many of whom believe that they are traveling north to work in well-paying factory jobs. During her seven years there, these women, who become her family, are subjected to unspeakable horrors — disease, forced abortions and hysterectomies, sexual trauma among other physical abuse — in the name of sacrificing themselves for the Imperial Japanese war effort. They are denied their humanity and even their names; in Manchuria, the woman acquires several new names from the soldiers she is forced to service: Tomiko, Yoshiko, Chieko, Fuyuko.

Yet she is one of the lucky ones — she makes it out of the comfort station. Her life back home, however, cannot resume the same trajectory. She is wracked by guilt at having been one of the few to survive and shame at having “sinned”. Unable so much as to share her ordeal with her family for the public embarrassment that it would entail, declaring herself to be a comfort woman is unthinkable. And so she maintains a cordial if distant relationship with her siblings and employers, hoping to live quietly and die dignified, all the while wanting to forget Manchuria but also being afraid to. She has been silenced, but she can never forget.

Kim’s account of the woman’s life in Manchuria appears in frequent flashbacks. At present, the woman is living in a dilapidated house in a rundown neighborhood earmarked for redevelopment. When not at home, she makes the rounds of the neighborhood, noting which homes have been vacated, visiting with the man who strips copper from wires, the alteration shop lady, the man who runs the corner market and his disabled wife. In all of these individuals she sees duality — how they are capable of both coldhearted pragmatism and also tender kindness. When the alteration lady casually asks her if she’d adopt her dog, she’s thrown into confusion. Sure, the woman has for years artificially inseminated the dog in order to churn out puppies to sell at the market, but she has also been earnestly devoted to the creature, tending to and feeding her with care.

The alteration lady’s attitude is not just confusing but also distressing, for it recalls her inhumane treatment in Manchuria. All around her, she sees conflicting mind-sets, motives pulling in opposite directions, and while from her early experiences one might expect her to become hardened to the unfeeling ways of the world, the woman nonetheless exhibits enormous empathy — towards the dog, her neighbors, the empty homes she passes, and to her fellow comfort woman. Though tremendously difficult for her to do, she also extends empathy to herself when, with great labor, she puts to paper, “I am a victim too.”

When news of the last one’s declining health is reported, the woman decides to act. She must let the last one know that even after she passes, there will still be “one left”. One to speak. One who will not forget. On the bus to the hospital, a name flutters to the tip of her tongue: “P’unggil,” her name in her ancestral village.