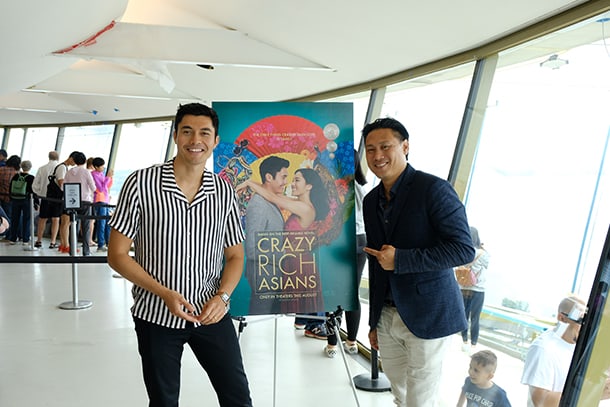 The film adaptation of Crazy Rich Asians is finally making its debut this month, five years after the novel of the same name rose to the top of The New York Times Best Seller List. Crazy Rich Asians has already been making headlines since 2016, when Warner Brothers acquired rights for the film after an intense bidding war, for a worldwide casting call on social media by director Jon M. Chu to discover new talent, and their dedication to contemporary Asian American representation – if you didn’t already know, Crazy Rich Asians features the first all-Asian cast in a Hollywood movie in 25 years.

With its release on the horizon, The International Examiner caught up with TV presenter-turned-male-lead-and-heartthrob Henry Golding (swoon!) and director Jon M. Chu on the top of the Space Needle (yes, really!) to talk about the legacy they hope Crazy Rich Asians will leave behind, how they are handling criticism, and so much more.

International Examiner: Crazy Rich Asians has such a huge cast with talent from all over. What was it like filming a huge ensemble movie?

John M. Chu: When you have the first all-Asian cast in so many years, you get the pick of the litter. I got the Avengers of Asian stars from all around the world. We had Ronny Chieng from The Daily Show, Jimmy O. Yang from Silicon Valley, Awkwafina, who I’ve loved for so long, Constance [Wu], Ken Jeong, and Michelle Yeoh, the icon. Being able to work with the best was like a master class of film school. Everyone was giving their all because not everyone gets this opportunity very often.

We got to see Henry grow throughout this process. He was great on day one, but to see him change by day three was uncanny. There are great beginners who can make the transition over a couple of movies, but this guy was so natural. We didn’t mold anything in editing. Even though he says he was a presenter, he clearly knew what he was doing.

IE: Henry, speaking of this role, we heard you initially declined auditioning for the role. What finally pushed you to pursue it?

Henry Golding: I was just stuck in my own head. I had never acted, I was sure as hell they going to put their neck out for someone who doesn’t have any experience. It was not until Jon reached out and said that I could be the character they were searching high and low for, that there were these crazy similarities, and asked me to read for him that I considered it. When I had somebody put that much faith in me, I was sure as hell going to try my best.

JMC: Thank God I was right! We didn’t have a backup!

HG: Could you imagine?

JMC: We could have put him in that white suit and have shot every scene with him in it.

IE: What kind of legacy do you think Crazy Rich Asians will leave behind?

JMC: My wife was pregnant when we were shooting, and I thought a lot, not about a legacy, but about what I wanted my daughter to have. Self-worth is everything. It determines how you see yourself and how you see the world. I know my struggles of my own self-worth growing up in a Chinese family in America. Being an all-American boy and going to Asia for the first time, and feeling like I’m a part of this, and then feeling like I’m not a part of it either.

HG: What he said. [laughs] Damn. I’ve got to write down some notes.

IE: How are you handling criticism, specifically criticism from people in the Asian American community who may not feel that this movie will represent Asians well, and that it’s a very East Asian-centric movie?

JMC: One movie shouldn’t have to do everything. It’s a movie. This movie is only to crack the door open. We want other movies, stories, and perspectives. There are plenty of scripts that are sitting on these executives’ desks that have gone through development, but just need to be greenlit. They are all watching our movie.

If Crazy Rich Asians does well, there will be more stories, and guess what? We won’t have to depend on one character in one giant movie or one movie to represent us all. We all know we’re much more complicated and layered than that. If we’re going to get these studios to crack the door open, someone has to hammer down first. If we are the hammer to start that, then so be it.

HG: The fact that people are being vocal about it shows that they care so much. Studios now know that people are watching, that audiences want authentic stories, and they don’t want to stories to be told from a white person’s perspective. They want it from Asian voices.

When news comes up that there’s whitewashing or whatever, don’t think that we’ve never thought of that. When it came to my part, I am half British, but it went back to the conversation of how Asian do you need to be, to embrace a culture? I’ve grown up in the jungles of Borneo. My parents brought me up in Malaysian as an Asian, so I’ve never felt home in the UK, nor have I felt at home in Asia. To be able to stand my ground, plant my flag, and say that I’m proud of my Asian roots. Jon’s kid, Willow, is going to be hapa as well. It is going to be so beautiful for her to see that the possibilities are there for you to own your culture.

IE: I’m turning 25 later this week, and it’s been 25 years since the last Hollywood movie with an all-Asian cast. Kids like me, a whole generation of us, have grown up without seeing this kind of representation on the silver screen. What words of encouragement do you have for the next generation of Asian creators?

JMC: Make things! If you write, write. If you direct, go direct – you have a camera, you have YouTube. Go make things. Don’t look at the past and think opportunities won’t exist because they didn’t then. That’s absolutely untrue, you cannot stop progress. We’re going to need an army of creators more than ever.

HG: Be bold. Don’t be afraid to go against the grain. Society tells us that it’s a one-way street, but people are realizing that things should not be that way. Those people are speaking out and are going out of their way to create things. The majority of people [may] say ‘I don’t want to watch an Asian movie” or “I don’t want to do that,” but when they realize that [Asian American representation] is so much more, that’s when the tides turn.

The interview has been edited and condensed for clarity. Crazy Rich Asians will be in theatres August 15. Visit www.crazyrichasiansmovie.com for showtimes and @CrazyRichAsians on Instagram for behind-the-scenes pictures.