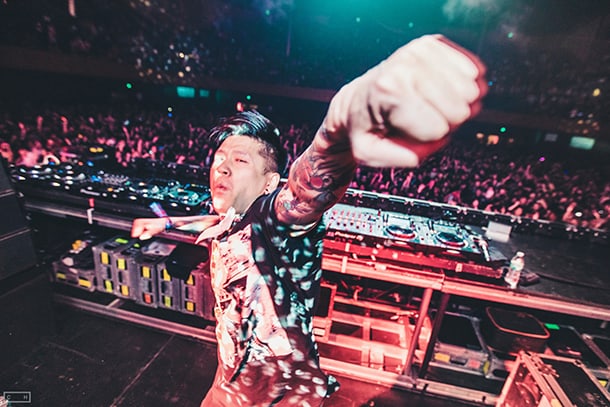 In the past year alone, we’ve seen Yultron play sets at EDM festival Beyond Wonderland, perform at Asia’s Got Talent with Jay Park, support on Marshmello’s tour, and much more.

“I’m kind of doing everything. I’m not really putting myself in a box and going, oh, I’m only going to be this type of artist, I’m just trying to do everything and letting people catch up with me,” said Yultron.

Yultron was born to a Cantonese father and Chinese mother who were first-generation immigrants. Like many Asian kids growing up, Yultron took violin and piano lessons, but it was unexpected for him to pursue music as a career. “I’ve always just been dabbling in music. I played in bands for fun, I picked up guitar, I played in bands in high school. When I got to college, I wanted to be in a band really bad, so I joined a couple of bands, and the bands ended up breaking up because of just band differences. I decided I just wanted to do my own thing and not have to worry about someone else’s opinion. I just started creating music then. In college, one thing led to another and I just never stopped.”

Yultron was making music for 10 years, and in 2011 connected with Far East Movement through an email song submission. He was the first artist the group signed to their management firm, Transparent Agency, who now has around eight acts on their roster. This collaboration really helped things get going.

Despite being signed to a mostly Asian American management firm, Yultron says he has a very diverse fanbase that mostly is not Asian. “Not until recently, I’ve started getting a lot more Asian people contacting me, or they’ll recognize me at an Asian tea spot, or a restaurant… this is crazy, I’ve never had Asian fans. It’s not from the Jay Park thing, which is really weird. Most of them are ravers [since] a lot of Asian people are ravers. The fact when they find out I’m Asian American, it makes them like me more. I think we have a natural tendency to stick together. That’s pretty cool, I’m stoked on the fact that there are Asian kids loving my music and I’ve never really thought about it before until recently.”

“The Jay Park thing” Yultron is referring to is “Forget About Tomorrow,” the second song he did with the k-pop star. “[Jay Park] opened me up to a lot of his fans and a lot of k-pop fans. [Forget About Tomorrow] is different from the songs Jay Park makes. It’s more into the world I’m in. I don’t make records like that normally either. We’re both taking a chance with each other on trying to find a medium of dance music and whatever Jay does. When Jay brought me onto Asia’s Got Talent, it was a big deal. People were like ‘whoa, who’s this guy?’ They’d never heard of me before.”

Messages from Asian fans have prompted Yultron to think more about his role as a visible Asian American artist. “It opened my eyes into thinking that I should be more…not necessarily saying I should only be geared toward Asian Americans, but that I should at least throw it out there that like hey, I’m proud to be Asian American and I’m just like you guys with parents that are super first-generation. I had to take SAT classes, I had to take violin classes, all the stuff, my parents didn’t approve of me making music, I had to go against them and their wishes for years. Not until recently were they finally okay with it.

Yultron’s self-titled album will be out this fall, and he has his next EP signed with H1GHER Music, Jay Park and Cha Cha Malone’s hip-hop label. “Me doing my own thing, making base music with my fans, that’s gonna help. Every little brick is going to help build this house. I’m taking this on piece by piece.”