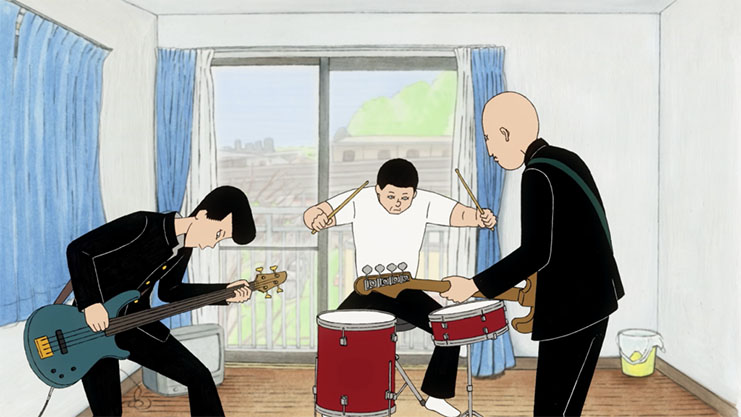 Before even watching a single frame of On-Gaku: Our Sound, it’s hard not to find it impressive. Partially crowdfunded and created over the span of seven years, this independent animated film is a testament to the dedication and artistic vision of everyone involved, including director Kenji Iwaisawa. Based on the 2005 cult manga hit “Ongaku and Manga” from author Hiroyuki Ohashi, this film’s animation brings that story to vibrant, entertaining life.

Clocking in at a breezy 71 minutes, this film knows not to waste a single second of your time, and is all the better for it. However, with its gorgeous, roughhewn animation and exciting soundtrack, you may find yourself wishing for more.

This film follows the exploits of three high school dopes, who are granted a surprising amount of depth and comedic ability from the rough squiggles that make up their faces and the talents of their voice actors. Though they may not be the most eloquent boys out there, once an electric guitar basically falls into the hands of their leader, Kenji, he decides that they have no choice but to form a band. This sort of laid back, relaxed storytelling does a lot to capture the meandering feelings of high school life.

Like many of the greats, from the Sex Pistols to Bauhaus, our boys don’t have much in the way of talent or formal training. However, fueled by teenage boredom and whatever raucous tendencies compel them to pick fights with other high schoolers, the music they play is full of raw, once-untapped energy.  They call their band “Kobujitsu.”

What really makes this film sing is that, for all its good cheer and humor, our favorite dopes and their musical endeavors are taken seriously. The amateurism with which they perform is celebrated, rather than mocked, and the music they create isn’t treated as being lesser than that of some of their more talented peers. Like any good rock ‘n’ roll scholar will tell you, it’s often better to be exciting than good, and Kobujitsu, with their atonal, krautrock-esque stylings, are definitely exciting. On-Gaku understands the inherent inclusivity of music more than most other films of its ilk.

This film is a true delight. From its idiosyncratic characters to its rough-and-ready animation style, On-Gaku: Our Sound forges its own path and is all the better for it.