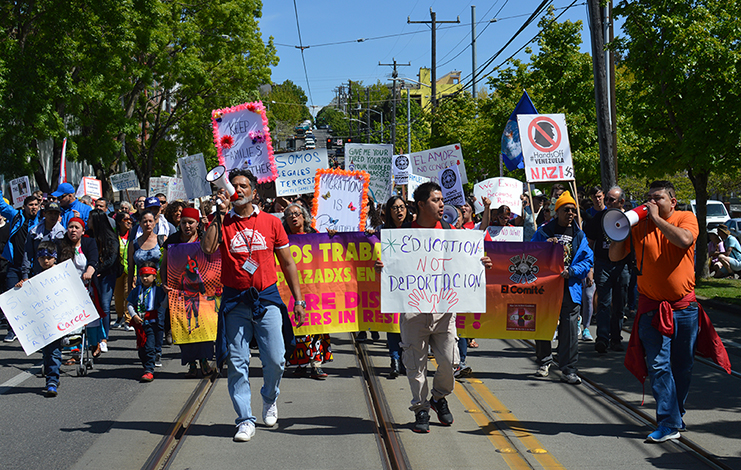 A congregation of marchers hiked from the Central District to downtown on a bright, clear day for Seattle’s annual May Day march for immigrant and workers’ rights.

Drums providing a beat for the CeAtl Tonalli Aztex dance group mingled with a brass band as the marchers brandished a sea of signs in support of workers and immigrants, Black Lives Matter, and protesting against war, U.S. imperialism, King County’s new youth jail, gentrification, the Trump administration’s crackdown on immigrants and asylum seekers. The march unfolded peacefully, the smell of incense held by the dancers carrying in the air.

Rebeca Muniz of One America said she was marching to support the welfare of workers and immigrants. “Right now holiday and sick time are being attacked, so people cannot take a sick day without potentially losing their jobs,” Muniz said. Immigrant workers in particular face more daunting challenges, Muniz added. “Immigrants don’t have the same kinds of rights that other workers do, but they should,” she said. “We live in a really anti-immigrant environment at the moment with the current administration, and it’s important that we defend these communities, to make sure that we welcome them with open arms, and understand that we all come from different places and that we deserve respect and dignity from our neighbors and from our workplaces.”

2019 is the 100th anniversary of the 1919 Seattle General Strike, noted Michael Byun, executive director of Asian Counseling and Referral Service (ACRS). “We’re concerned about our immigrant and refugee workers and workers across the world,” Byun said. “Especially our newly arriving immigrants and refugees…we want to make sure that they’re treated well, are given fair wages, good benefits, are given access to opportunities.”

Yin Yu, a member of Pacific Rim Solidarity Network (PARISOL), an anti-capitalist, leftist Chinese and Chinese diaspora organization, said she was marching for “Filipino workers who have to migrate because of U.S. imperialism.” Her group also aims to challenge “the dominant narrative of the Asian communities,” which Yu said is often controlled by businesses. “It’s often very conservative, and that’s not our narrative,” she said. “We believe in strong communities and we’re fighting displacement in Chinatown International District.”

The march stopped at the Chateau Apartments in the Central District, a Section 8 subsidized building containing 21 units that was bought by a developer that aims to build a new project in its place. Residents spoke to marchers below, calling for rent control. 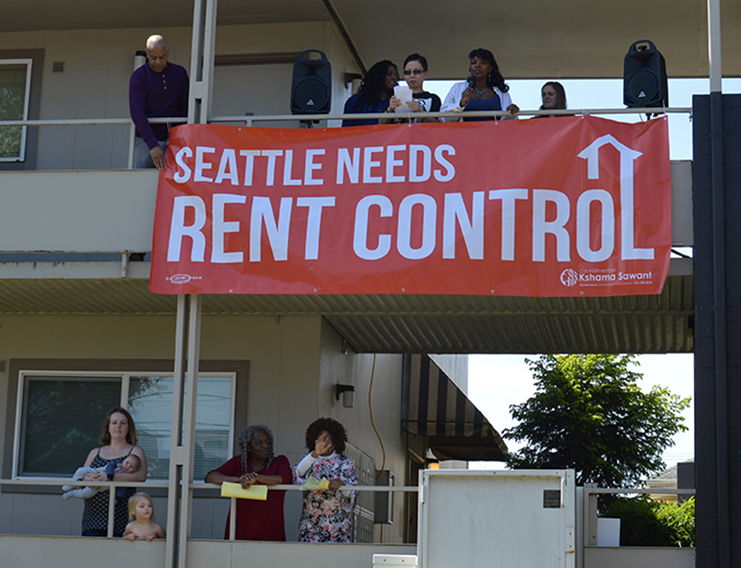