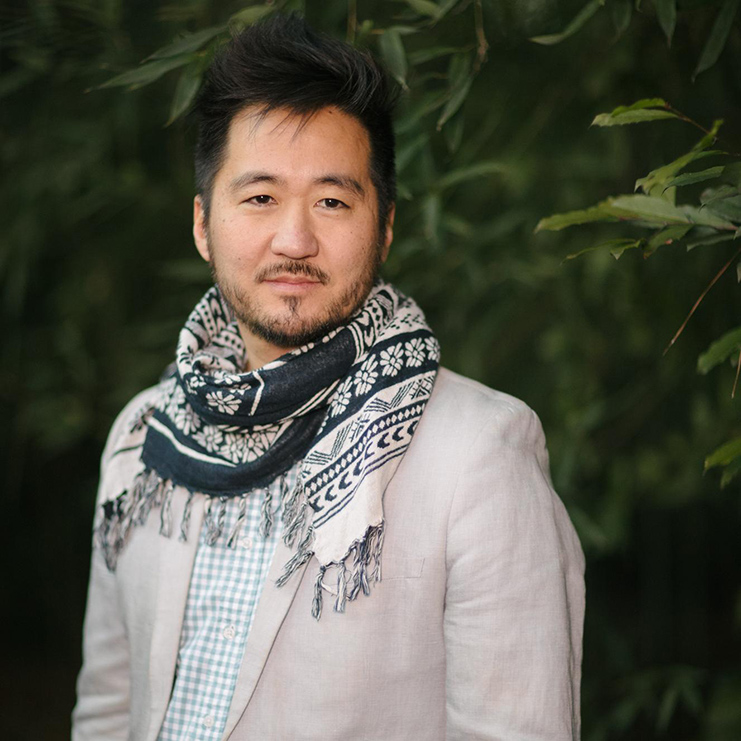 Omoiyari: A Song Film by Kishi Bashi (reviewed in the IE here, scroll down) is a unique documentary that blends live music performance, interview, history and archival footage, centering on the legacy of Japanese American incarceration during WWII.

Co-directed by Kaoru Ishibashi (known professionally as composer and songwriter Kishi Bashi) and Justin Taylor Smith, the film is as much about the present as it is the past. In 2017, Ishibashi was commissioned to compose a multimedia piece about Executive Order 9066, leading to the inspiration for a road trip on which he would improvise at the historical sites of former camps while Smith filmed. An unexpected part of the journey was Ishibashi, the son of two post-WWII immigrants, coming to terms with his Japanese American identity in new ways.

Just before the world premiere of Omoiyari at this year’s SXSW festival, the directors discussed inspiration, the creative process and what they hope that audiences take away from the film.

Misa Shikuma: What were some of the challenges of shooting a film in which live performance is a key component? In particular, I’m thinking of that memorable scene where you’re playing violin in the middle of a field with mountains behind you.

Kaoru Ishibashi: We decided early on that we wanted that live component to blend into the score, so we had that in mind when I was playing. Like this could be a song that’s playing when we talk about this subject. As the co-director but also the composer I had free rein, like he didn’t comment on any of my composing at the end so it was great. I could just do what I wanted to blend score with the live performance.

Justin Taylor Smith: The idea of the film started with K wanting to make improvisational music while being on sites relevant to the incarceration. Like trying to channel what it may have felt like to be in a camp back then, or just channeling the feelings of that space. Because there’s just very little left of the camps. So it started off just him improvising music on the spot, and that became the foundation of these various scenes.

MS: I’m half-Japanese and grew up pretty well versed in this part of history, but I’d never seen some of the archival footage in the film. How did those elements come into play?

KI: One of the families donated 16mm reels, so those are [being shown] for the first time. They’re beautiful. Justin actually went down and met the family.

JTS: His daughters got in touch with us through Densho. The story goes he basically asked the warden of Heart Mountain – they had Sears catalogs to order things – and was able to acquire an 8mm camera and film stock, and to build a darkroom at Heart Mountain. And over the course of 1942 – 1945 [he] shot various little films. Some of them had been digitized prior to us getting the reels, but several of them hadn’t ever been seen before. So I flew to Fresno, I brought the reels down to Burbank to have them cleaned, and seeing those back for the first time in 4K because the original versions were really low, standard definition quality…

KI: In the footage everybody’s smiling and it’s beautiful, and they have flowers and garden beds. Initially we were like, ‘How are we gonna use this?’ Because we want to tell the awful side of the incarceration but, honestly, to see that kind of beauty and happiness exist in these camps…you realize that these people are trying to make the best of themselves at the time, and I think that’s really what our film is about. We’re encouraging people to see the humanity, always, and be inspired by their courage.

JTS: You can see the resilience of that community through those films. That, to me, was one of the most powerful parts of the film.

MS: It’s remarkable that he was able to capture that at all, because I thought that cameras were contraband. But maybe he just had a good relationship with the warden.

KI: I think by then they realized that [the Japanese] weren’t threats.

JTS: And there’s shots in those reels where there’s white folks sledding. There’s clearly people from Cody, Wyoming that are part of that community as well. It’s very telling. With no words or audio you can just see the progression.

KI: The other thing is that I’m sure they would have been censored if they were filming “bad” things or things that would have projected negatively on [the camp].

MS: Members of my family were in the camps, but growing up I pretty much never heard any of them talk about that experience. What was it like interviewing people who were there?

KI: I think the people we interviewed were people who from the very beginning were very vocal about it. And what we realized is that there’s a generation of people who really didn’t want to speak about it. Especially the people who were incarcerated as adults. Your generation – third, fourth – and after were removed from the trauma and could look back and start unpacking this kind of thing. Do you know where your family was incarcerated?

MS: They were in Tule Lake, Amache and Poston.

KI: If they were adults while they were incarcerated it was pretty humiliating, I think. If you were a kid during that time and now you’re 80-something years old, most of them actually have fond memories because they were just a bunch of kids running around.

JTS: And then you have [people] like Erin Aoyama, in the film, whose grandma was in Heart Mountain. But while her grandma was alive she never heard a story. They just called it “camp.” She didn’t really even question her own Japanese American identity until she was in university. What we found was a massive generational gap between people not talking about it and a very assimilated Japanese American community that doesn’t. Well, they kind of talk about it but not really.

MS: You’ve mentioned that one of the hard parts of the film was narrowing the focus down to one central narrative. What are some of the other subjects that you guys shot that didn’t make the final cut?

KI: My mother is Okinawan, so part of my story is that we went to Okinawa to shoot. My grandmother remembers the Battle of Okinawa where a quarter of the civilian population perished, and she lost her sister. And I thought that’s important because it showed the other side. We’re the victors so we have our perspective of what happened during WWII, but the Japanese were decimated. They were humiliated and they had to kind of internalize the defeat. And then, of course, Okinawans are persecuted by the mainland Japanese so I always thought that had a place. That was a 15-minute segment that got cut, but it tightened up the movie.

JTS: We did an entire segment in the South, trying to tie in what has happened to African Americans in history as well. We started to get into all of these different parallel stories and once you get into all that then it’s like, ‘Well why not get into what happened to indigenous people in North America?’ And then, ‘Oh my god this is a five-part series, four-hour film.’ It was really hard. I spent a lot of time cutting [the Okinawa segment]. I really liked that scene, and I think it’s something that I don’t think really anyone knows about at all.

MS: Maybe that could be the sequel or follow-up?

MS: One of my favorite quotes from your dad in the film is about how being a musician seems like it would be fun. When you were still trying to establish yourself as a musician, were they supportive? Standard Asian parents are usually more like, “You should get an engineering degree.”

KI: It was never in my mind that I could be a professional musician, but I was always into music. So I went to Cornell for two years as an engineering major, and then I dropped out. I was on academic probation because I was spending a lot of time playing with my band, so then I transferred to jazz school. I remember telling this guy, Andy – he was Asian American and played music too – that I was transferring to Berkley to play music and he was crying, “That’s what I want to do but my parents won’t let me.” And I think he stayed in Cornell and finished. I’m really lucky I have parents who supported me.

MS: I feel a weird sense of nostalgia now when I watch things that were shot before the pandemic, like the concert footage in the film where you and your band are playing right in the center of the crowd. How has that affected you and the production?

JTS: We literally shot our last scene for the film in March 2020 in Wyoming and then went home, and I got COVID two weeks later. I guess it forced us to cut the movie.

KI: Honestly, we’re really lucky. Because if we had finished the film then, we would have had virtual premieres, which would not have been as exciting.

JTS: There was always a feeling that we needed to put the movie out while Trump was still president because the media was so hyped up about immigration, detention, etc. We were trying to get it out before but I think putting it out right now was the right time.

MS: Did you always have the concept of omoiyari (putting oneself in another’s shoes and acting upon it) in mind as you were making the film, or did it emerge as a theme from all the interviews, research, etc?

KI: When I was writing the orchestral piece [about EO 9066] I was trying to get to the bottom of all our problems in the world, and I think it’s that lack of empathy can cause needless aggression and fear. So I was looking for Japanese word, and that was pretty early on.

JTS: We rallied around the idea that without action you can have empathy, but empathy doesn’t really do anything unless you engage and start to talk about it and get involved. Otherwise you’re just liking something on Instagram.