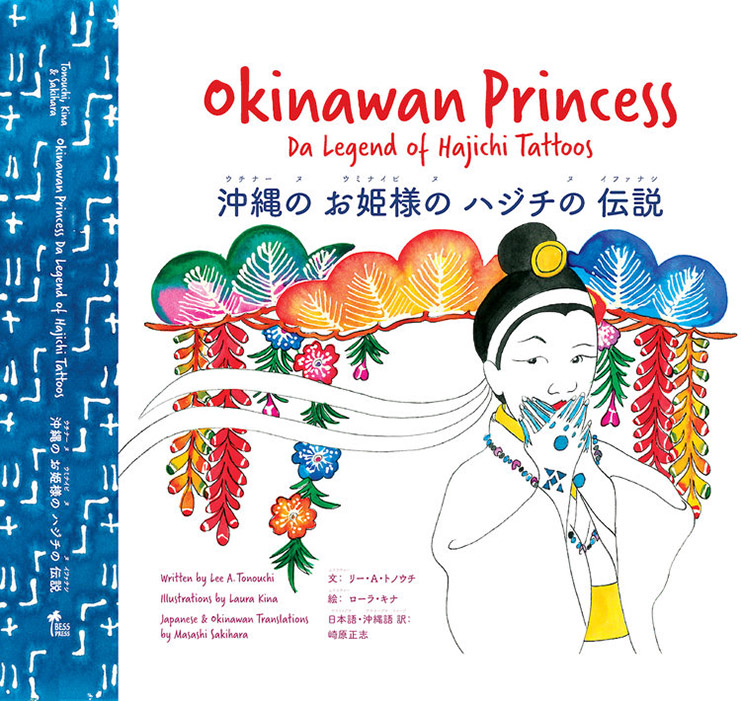 I’m a hapa haole Uchinanchu, born and raised in Portland, Oregon by a Montana-bred haole/white mother and a Hawai’i-bred Uchinanchu/Okinawan father. I am three generations removed from Uchinaaguchi, our indigenous language, two generations removed from fluent Japanese, and one generation removed from fluent Hawai’i Creole English (HCE) also known as “Pidgin.” Uchinaaguchi was banned by the Japanese during the Meiji era and colonization. Across the 20th century, some Okinawans internalized the notion that Uchinaaguchi was a “dirty” language. And HCE/Pidgin remains low-status even as it is widely spoken in Hawai’i by both Native Hawaiians and the descendants of immigrant plantation workers, like my grandparents.

Growing up, I was told that my great-grandmother had hajichi tattoos on her hands. Others in my family told me these tattoos were banned by the Japanese, who called it a “primitive” practice, and in Hawai’i, Naichi (“mainland” Japanese) immigrants looked down on Uchinanchu practices, including hajichi. So Uchinanchu women often hid their hands to avoid ridicule. No one in my family has tattooed their hands since.

It’s in this context that we Uchinanchu-American women receive the gift of Okinawan Princess: Da Legend of Hajichi Tattoos, a picture book by writer Lee Tonouchi and artist Laura Kina written in an accessible version of Pidgin, in Japanese and in Uchinaaguchi. Together, Tonouchi and Kina offer a visually and linguistically rich, decolonizing feminist tale, complete with humor and beauty, celebrating the power and history of an indigenous women’s practice.

The book tells the story of a young Uchinanchu girl in Hawai’i whose grandmother shares the story of her own mother’s tattooed hands and why women don’t practice hajichi anymore:

But the real story of hajichi, her grandmother says, begins with “one beautiful Okinawan princess” who was kidnapped by an “evil Pirate King” and taken from her land. Imprisoned, the princess used what she had on hand – needle, ink and her “wits,” – to escape. Needling the ink into her hands in such a way that her captors thought ugly, the princess convinced the Evil Pirate King to set her free. When she got home, all the women thought the tattoos were stunning. And from then on, Okinawan girls all tattooed their hands – “for fashion and for protection from pirates.”

In talking with a few Uchinanchu-American millennials about Okinawan Princess, it’s clear how much this picture book matters. As Esme Yokooji, a young Uchinanchu-American woman, told me, she never had the chance to know “much about Okinawan history, culture or identity.” Growing up in Hawai’i, she used to just tell people she was Japanese, “because it didn’t lead to as many questions or insults.” But this book made her “weep, laugh, and made her feel joy that she was born Okinawan.” She said she’s “thankful [it] exists for young Okinawan girls coming of age in a world that has vastly ignored the voices and experiences of indigenous peoples.”

The book also contains a few explanatory post-scripts about the actual history of hajichi, the meaning of the different symbols women used, and language explanations of both Uchinaaguchi and Pidgin. This background is important, especially since, as Yokooji points out, “The story of Okinawa’s colonization is intimately tied with hajichi, with the spiritual power and agency of Okinawan women.” As Kina writes in the post-script, hajichi were not only thought to bring good luck, but also, “to protect young women from being hurt by invading Japanese samurai.”

While Okinawan Princess: Da Legend of Hajichi Tattoos reclaims the power of a forbidden cultural practice, it strikes me as an act of solidarity with current Okinawan struggles, including those for indigenous rights, environmental protection, and anti-militarism/peace (see, for example, Kaiya Yonamine’s short film Our Islands’ Treasure at riseforhenoko.com about the current intergenerational, anti-base struggle in Henoko, Okinawa).

As recent actions by U.S. leaders have shown, we still live in an era of Evil Pirate Kings. Okinawan Princess can remind of young women of their/our power and agency, so they/we can make use of whatever’s on hand: our needle, our ink and our wits.