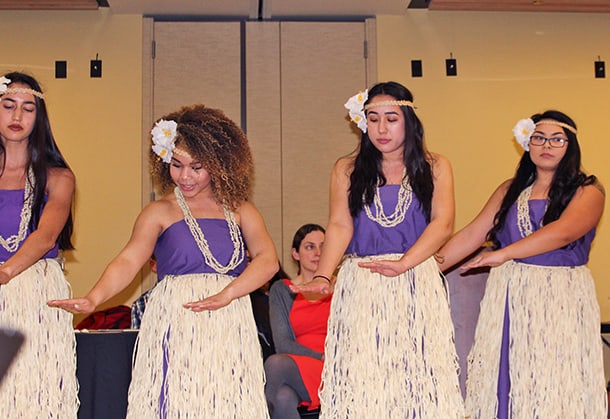 The Unity Room in the Samuel E. Kelly Ethnic Cultural Center was packed, with every seat at the round tables taken and every nook and corner of the room filled with eager students craning their necks to see the presenters at the day’s event.

Professor Rick Bonus from the American Ethnic Studies Department went to the podium and cleared his throat. “I’m probably going to cry,” he said and was answered with some laughter and encouragement from the crowd.

“This is not a gift from the UW to the community,” Bonus said, in reference to the establishment of the new Oceanic and Pacific Islander Studies (OPIS) minor. “It is a gift from us to our school.”

For many of the students and community members attending, the launch party represented much more than just the beginning of the minor. To them, it was the culmination of over two decades of coalition building, hard work and community collaboration. It was a grassroots effort from the beginning, with students from the Pacific Islander Students Commission (PISC), Filipino American Student Association and others in UW’s Pacific Islander community all working together toward a common goal.

“The minor has been a community effort from the very beginning, starting over 20 years ago,” PISC director Katrina Punzalan said, who was also in attendance at the event.

”It is the students who did this and created this legacy. We are just following.,” said anthropology professor Holly Barker.

Washington state has the third largest Pacific Islander and Native Hawaiian population in the nation, according to data gathered by the U.S. Census Bureau. This program would be a pioneer within the state, bringing much needed visibility and academic study to members of these groups.

The minor will officially be open to students in the spring of 2018, and it will offer an opportunity to learn about the histories and contemporary cultures of Oceania through both academic coursework and community experiences. The curriculum is described as multidisciplinary and comparative, with a total of 25 credits from courses in the department of American Indian Studies, where the minor is housed.
Creating new areas of study within a university as large as UW is no small feat, and the journey to establish the OPIS minor is no different.

“When I was hired in 2001, the advocacy for Pacific Islander Studies had been happening already,” Bonus said in an interview. “Students were trying to transform their university, a place that largely treated them as invisible. And instead of giving up on the school, they were trying to convince the school to recognize them.”

Bonus said that in his time at UW, every couple of years there have been students who have taken up the torch of trying to establish OPIS at UW, but have fallen short as people have graduated or bureaucracy has prevented the project from moving forward.

“I joined them in their advocacy, but it’s been a struggle,” Bonus said. “It’s just taken so long and it’s been so draining. Each time advocacy happens and new students come in, there is a slightly different strategy.”

Launching the minor first was a strategic choice on the part of the students, with the ultimate goal of launching an OPIS major, which would require more money, faculty, space, and support from the administration.

Establishing the minor took a series of steps and collaboration from students, faculty members, and administration officials. First, students approached professors with the goal of designing an OPIS minor housed in the department of American Indian Studies in the College of Arts and Sciences. The proposal goes before the University Curriculum Committee, which vets all new programs. Members go back and forth discussing the proposed curriculum change, determining things such as how viable the proposed courses are and how often the courses are offered. At the end of the process, if passed, the university provost signs off on the new program.

In total, the process took more than a year, not including the almost two decades of advocacy leading up to his moment.

Mika Magbanua, a sophomore at UW, introduced a bill in support of Pacific Islander Studies in the ASUW Student Senate last year and did extensive research on how ethnic studies affect student grades,
“I found that students perform better when they are represented in their studies, and how students perform poorly in ethnocentric studies,” Magbanua said. “PIs seeing themselves in academia is really important.”

“Everyone is really excited; they’re slowly seeing themselves in the school and as belonging here,” she continued. “Seeing themselves represented is a big deal, and it means a lot to them.”

Access to higher education is a priority in the PI community, according to Punzalan, who believes that the community already faces visibility issues on campus as they constitute only one percent of the school community.

“If you are able to learn about your own history and culture, it will encourage more students to go into studies,” Punzalan said. “It allows more people to get in touch with their own roots. If we don’t study these things, who will?”

Community members believe that the next step in supporting Pacific Islander students at the UW is to create a major and potentially a department in the future, but that this a good first step in voicing their concerns and making themselves known to the university administration.

“Right now, we did a very practical route and relied on the existing units of the school,” Bonus said. “We had to start somewhere, we can’t just keep pointing fingers. You have to break the circle by asking the institution to change first rather than asking students to change first. Hard to detect demand if there is no object of demand, but this might be a gauge if this is a viable thing for students to pursue.”

Attendees at the launch event, while happy that the minor will finally be offered to students, all echoed the same hope that this will not be the end of the road for Pacific Islander studies at the UW.

“This is not the end,” Bonus said. “We are going to paddle even further; the oceans connect us, not divide us, and our connected history lies in the future together.”