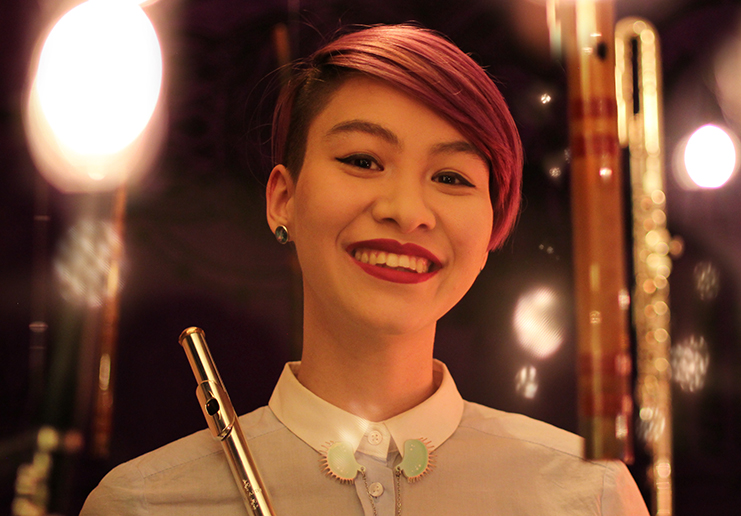 Each spring for the past 35 years, local arts organization On the Boards has presented a festival focusing on new works from Pacific Northwest artists. In 2019, the 36th NW New Works Festival will present about a dozen local artists over the course of five days in June.

Included in this festival are dancer and performance artist Naomi Macalalad Bragin, dancer and choreographer Imana Gunawan, and flutist and composer Leanna Keith.

A key motivation for the artists is the NW-specific focus of the festival. “I’m interested in being in community with other artists in the region who are doing experimental work,” Bragin said, “and the possibility of locating my work within the context of PNW-specific cultural work.”

Imana Gunawan agreed in regard to presenting two parts of her vestiges series. “It is informed by my day-to-day journalism work and witnessing various conflicts locally and globally and how this alters generations,” Gunawan said, “who gets to live, who doesn’t, and more importantly, who gets to live a dignified life where their rights are honored.”

Likewise, Leanna Keith is particularly interested in the emphasis on current issues in the Pacific Northwest. “I’ll be presenting a work titled Finding the InBetween, which is a piece that I’ve been developing for several years now, exploring what it means to be a mixed-race individual in America,” Keith said. “It combines crowd-sourced interviews, live flute performance and dance.”

According to curatorial intern Eli Steffen, this year’s festival focuses heavily on the politics of the local region. “Some themes I would highlight from this year’s festival are indigenity, sovereignty, environmental possibility and systemic violence,” said Steffen, who brings to the curatorial role the experience of having performed in the 2018 NW New Works Festival. “Several artists are exploring migration and colonization through an indigenous lens, asking what stories we have irreparably lost and what languages, spoken and otherwise, still hold power.”

This work has both a political and an artist aim. “I’ve sought a unique way to interweave dance, scholarship and activism,” Bragin said, “in such a way as to exercise the fullest extent of my creative capacities in service of my intersecting commitments to building community.”

In parallel, the festival links the local region to larger global experiences. “There is also the question of systemic oppression and how marginalized communities should or should not tailor language to the demands of dominant culture and what is lost when they do,” Steffen said. “Loss, devastation, and violence whether in the form of environmental catastrophe, colonial devastation, or individual death weave throughout the festival asking us to face head-on the reality of our current situation.”

For these artists, collaboration has been key throughout the creative process. “Each one of my collaborators has been intensely involved in the creation process,” Keith said of Angel Moonyeka Alviar-Langley, Mama Amelia the LovePunk Clearheart, and Alyza DelPan-Monley. “It has been deeply humbling to receive these audio interviews over the internet from complete strangers to create this soundscape we will be hearing throughout the work. I have been awestruck by the level of vulnerability and so incredibly grateful.”

Gunawan also credits the four dancers working on the vestiges piece: El Nyberg, Cheryl Delostrinos, Devin Munoz and Ivana Lin. “I think the perpetual challenge is finding your individual voice while still being rooted to the communities that nourish you,” Gunawan said. “For me, these communities are often groups of people that have been historically pushed aside. I want to continue honing in on creating work that never loses sight of where I come from and work that honors the shoulders I stand on.”

Central to this positioning of herself and her work, for Gunawan, is the importance of justice. “Your work is part of an ecosystem of art and culture that interacts with the world at large, and the world is full of toxic systems,” she said. “Art doesn’t exist in a vacuum.”

But countering injustice poses numerous challenges. “I have to be accountable and make sure the art-making process is equitable, which means everyone that I collaborate with is compensated in some way, is treated with dignity and is honored for their work,” Gunawan said. “But even this can so quickly run into the politics of funding, lack of resources, competition between artists and so many issues driven by scarcity.”

Even when economic issues are addressed, navigating power imbalances is never easy. “I have to also be accountable when my works are intentionally or unintentionally harmful to marginalized communities,” Gunawan said. “That’s such a vulnerable process because everyone including myself will probably mess up at some point, so how do you hold yourself accountable, make amends and grow? And even further in the grand scheme of things, how do I make work that always, on some level, challenges the current power structures?”

Steffen alludes to these challenges in the curation of the festival as a whole. “During this process I have had the amazing fortune to be in discussion with Rachel Cook about what a curator actually is,” Steffen said. “We have had conversation about the ethics of curation, how to support and push artists, and how to build effective framing around performers’ work.”

Despite these challenges, Steffen asserts that this year’s festival offers beacons of hope. “Many of the pieces speak to the possibility and power of indigenous, queer, fat and other oppressed bodies and cultures,” Steffen said, “to lead us towards realms of possibility outside of and in opposition to dominant society.”