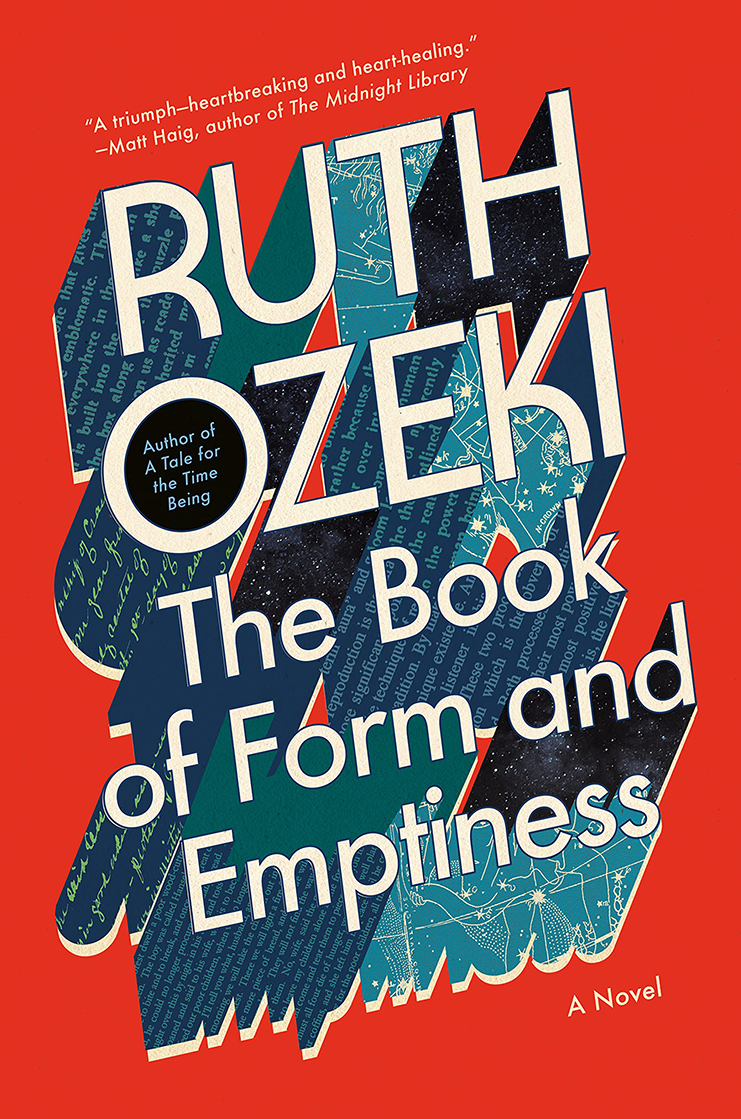 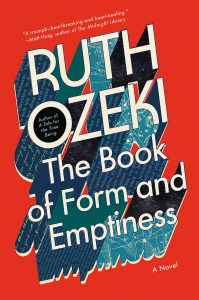 According to Ruth Ozeki, “Artists and writers want to enact on the page or in the artwork an experience of life that is strange or unfamiliar so that the audience or the reader can wake up and experience their reality differently.” The Canadian American author practices her philosophy in many arts: She’s a filmmaker, a Zen Buddhist priest, and a professor of creative writing at Smith College. Ozeki’s latest novel, The Book of Form and Emptiness, challenges the stigma of unprocessed grief by placing us inside the mind of a teenager battling mental illness – unless he’s not.

At first 13-year-old Benny mistakes the mysterious voices for his dreams. He continues telling himself not to worry, even after his recently-deceased father begins waking him up. Don’t some people hear loved ones talking after they die? But when his mother’s piles of aging paraphernalia greet him when he ventures out of his room morning, Benny can’t help wondering if he’s going crazy. His school teachers wonder, too, and a violent incident with talking scissors lands him in a pediatric psychiatry ward.

One of Ozeki’s gifts is her ability to generate believable unpredictability, and Benny’s stay in the pediatric psychiatry ward – nicknamed “Pedipsy” by its young patients – highlights this gift. The scissor incident implies Benny is unstable, but Ozeki has already countered his suggested insanity by making him one of the novel’s narrators. Halfway through his stay Pedipsy, Ozeki introduces an eccentric older teen named Alice to intensify our suspicions. Alice seems equally skeptical, and passes Benny a slip of paper instructing him to talk to his sneakers. “You don’t have to do anything,” Alice explains. “You can just think about doing it. Sometimes that’s just as good.” Her deadpan reaction when Benny reports the surprising results suggests Ozeki might be questioning more than Benny’s diagnosis: What if it’s crazy to worry about people hearing voices, as long as the listeners channel their awareness for good instead of evil? His post-Pedipsy life only intensifies her question.

Benny is discharged from Pedipsy with a damning diagnosis, rigorous medication regimen, and mysterious injunction from Alice to go to the library. It’s easy to find the library, but seemingly impossible to find Alice and escape a bottle-collecting Slovenian homeless man. Benny worries the schizophrenic Bottleman is tailing him because he senses their shared mental illness – until Alice materializes and reveals the Bottleman is on a mission to bring Benny to their refuge on the fourth floor. Alice is a performance artist who calls herself the Aleph when she’s not institutionalized, while the Bottleman, actually named Slavoj, was a famous revolutionary poet in Slovenia. Benny’s relationships with the Aleph and Slavoj comprise the heart of the book and act as conduits for Ozeki’s social commentary.

Benny is the easiest to decipher, with his dysfunctional mother, unresolved grief, and overmedicated mental disorder. The Aleph’s reticence makes her more complex, but as she reveals tidbits of her past, we gather that her drug abuse – and possibly misdiagnosed mental illness – stem from a flawed foster system. In this way, her struggles don’t seem wildly different from Benny’s, even if her psychological and emotional damage is worse. How many children could we save, Ozeki seems to ask, if adults invested time in them instead of “solving” them with labels, medications and systems?

Slavoj is both the most straightforward and complex character. A subversive Slovenian poet in 1970’s, the voices he hears have always been essential to his art. His positive perspective on schizophrenia even offers Benny a sort of redemption, especially when he takes Benny to the Library’s Bindery – a storehouse of rusty sewing machines and unbound blank pages:

“The Bindery contains everything, the Bottleman had said: Anything is possible. And now Benny understood. The Bindery was primordial, a place of vast, boundless silence that contained all sound, and emptiness that contained all form….He could hear their voices speaking, and then, suddenly, he could see them, all the wild, unbound words, like a frenzied cloud of dust motes, spinning and dancing around him in the dim green lights.”

Beyond initiating Benny’s epiphany, Slavoj’s career as a poet makes him a larger rebuttal to the idea that all homeless are useless to society or dangerously ill. He spends the novel drafting his magnum opus; even if we might call him mentally ill, he’s also responsible for mentoring two at-risk teenagers.

Slavoj and his friends aren’t Ozeki’s only commentary on social stigma, however. Benny’s mother, Annabelle, represents another form of self-harm: consumerism. At the beginning of the novel, Annabelle is trapped in a self-destructive cycle of binge eating and compulsive shopping. But she hasn’t always been this way. She frequently admires the svelte, high-performing woman she was when her husband was alive, and Benny’s constant berating suggests her idyllic memories might not be wrong.

Once again, Ozeki complicates common social stereotypes. Annabelle wasn’t predisposed to obesity, and she didn’t always suffer from anxiety or hoard second-hand trinkets. Recovering from her husband’s death isn’t straightforward, no matter how hard she tries – or how much her failures cost her.

The novel may be filled with brokenness, but it only hints at solutions.  Perhaps the most interesting solution is its primary narrator – the novel itself. Ozeki divides the narration among the Book, Benny, and Tidy Magic, a self-help book that exerts an almost spiritual power over Annabelle. As we might expect, the Book offers the clearest window into each character, occasionally even arguing with Benny about how or why certain events transpired.

At first, the idea of a self-narrating book might seem like a ploy to make the novel stand out from other new releases, but a closer reading suggests something deeper. Presenting the Book and Benny as collaborators, sometimes in concert and sometimes in opposition, reinforces the fallibility of human perspective. Like Benny, can any of us be sure our memories are real? Or can we only try our best? If so, perhaps we should approach each other with more humility and grace.

Ruth Ozeki will engage in conversation about her book with Karen Joy Fowler on Wed., September 22, 2021, at 6 PM (PDT). This is a virtual event taking place on Zoom and links will be sent out 48 hours before the event. Co-presented by Third Place Books, Village Books and Elliott Bay Book Company. For details, go to elliottbaybook.com.