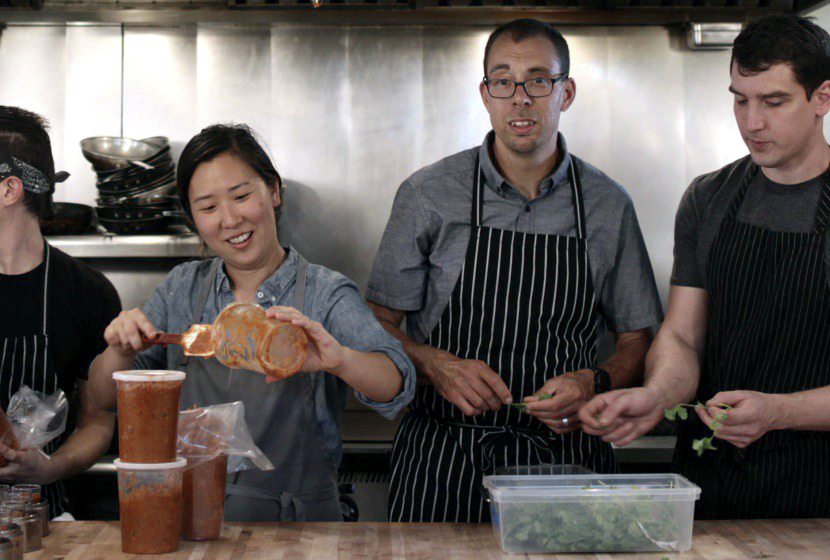 Rachel Yang has joined the zealous fray of celebrity cookbook authors. Who is she and why should you care?

Rachel Yang, chef and, in partnership with her husband Seif Chirchi, formidable restaurateur, is trying on a new hat: Cookbook author. The chef and restaurant owner couple have lived in Seattle since 2006 with their young sons, Pike and Rye. Their company, Relay Restaurant Group, owns and operates four highly acclaimed restaurants: Joule, established in 2007 in the Wallingford/Fremont area, is a Korean fusion-style steakhouse; Revel, which opened in Fremont in 2010, is a casual Korean-style dumplings, pancakes and noodles establishment; Trove, on Capitol Hill since 2014, is a multiplex venture featuring Korean BBQ, a noodle bar and a frozen custard outlet; and Revelry, opened in Portland in 2016 (where Chirchi’s parents live), is a late-night Korean street food spot focusing on classic Revel dishes and snacks. Both Rachel and Seif are working chefs who cook in their busy kitchens throughout the week.

Yang, born Yang Chung Hwa in South Korea, was educated in the U.S. from the age of 15, where she changed her name to Rachel Yang and received degrees in fine arts and urban studies from Brown University. A scarce job market motivated her to pursue a career in an alternative field. She trained at what is now the Institute of Culinary Education and later in classical French and modern American fine-dining in the kitchens of some of New York’s top restaurants: Daniel Boulud’s DB Bistro Moderne, Alain Ducasse’s Essex House (where she met Chirchi), Thomas Keller’s Per Se and Napa’s The French Laundry. By 2005, she was heading up the kitchen at D’or Ahn, in NYC’s West Chelsea district, where she began to cook with French techniques while incorporating her Asian heritage into the dishes served at the small, upscale Korean eatery.

Yang is a self-described “Korean chef who doesn’t cook [traditional] Korean food”. Her dishes merge the flavorful fare of the Land of the Morning Calm with those of “Japan, China, France, Italy, Mexico, Spain, Thailand, Vietnam, Mongolia, India” and a bevy of other global cuisines. The result is a smorgasbord of unconventional edible feasts Yang refers to as “food without boundaries.” It’s savory, spicy, an “offbeat combination of Korean food and international flavors.”

From the beginning, Yang, Chirchi and their restaurants have consistently received high praise from food critics and connoisseurs. Joule was featured in the Wall Street Journal as part of Food & Wine’s 10 Best Restaurant Dishes of 2008, and was one of Seattle Metropolitan’s 2008 Best New Restaurants. In 2009, the Seattle Weekly gave Yang and Chirchi its Innovation Award; in 2011, former New York Times food critic Frank Bruni named Revel’s asparagus rice bowl “The Best Thing I Ever Ate” on national TV’s Food Network; in 2013 Bon Appétit magazine ranked Joule as #9 in its annual Best Restaurants in America; in 2015 the couple earned a StarChefs Rising Star Restaurateurs Award, and Trove was named one of GQ’s 25 most Outstanding Restaurants. The husband and wife duo have appeared on Iron Chef America, have received numerous James Beard Foundation Award nominations, and are currently finalists for its Best Chef Northwest Award for 2017.

Yang (with co-author Jess Thomson) has just released a hefty 320-page tome featuring Korean-inspired, multi-ethnic recipes that tweak the standard conventions of how-to kitchen primers. My Rice Bowl: Korean Cooking Outside the Lines combines Yang’s autobiographic running commentaries with well over six dozen unique recipes – all of which would feel right at home on the menus of her restaurants, (and many of them are). Reminiscent of Tender at the Bone: Growing Up at the Table, a memoir of Gourmet Magazine’s former editor-in-chief Ruth Reichl, whose autobiographic book was liberally garnished with her favorite recipes, Yang and Thomsons’ publication pulls an about-face. Centered on methods, instructions, techniques, procedures, recipes and philosophical approaches to food, Yang prefaces each chapter (there are 10; 11 if you count the free-for-all opening section) with episodes from her life’s journey: an accumulation assembled in a running stockpile of personal recollections, informative accounts and family anecdotes.

What sets this book apart is approach — its conspiratorial, conversational tone. It pulls you in from the covers and envelopes you in a warm, engaging, highly-readable narrative, unfolding like a gossipy chat between friends (“It was always the plan that once I’d gotten my American education I’d go back to Korea”), an amiable counseling session (“Don’t be tempted to substitute ancho or another chili powder for chipotle”), a straightforward instructive monologue (“Medjool Dates . . . are dried fruit of a specific kind of palm tree native to the Middle East. They’re great as a snack, but when they’re cooked, they dissolve and lend a mild, earthy sweetness to foods.”).

My Rice Bowl could have been just another cookbook to devour space on your already congested bookshelves. But it’s not. Entertaining and highly informative, it reads like a personal journal, replete with a family’s album of photos and intimate disclosures of the how, when and why of becoming one of the premiere Northwest chefs and restauranteurs.

The book is divided into ten specific categories: Banchan (side dishes), Pickles, Kimchi, Pancakes, Dumplings, Barbeque, Noodles, Rice and Grains, Hot Pots and Stews, and Dessert. In addition, the book identifies and defined an extensive list of staple ingredients Yang uses to create the dishes in her home and restaurant kitchens. For example, crab paste: “is made from salted preserved crab, often mixed with garlic, chilies, and ginger. It lends a savory salty flavor to foods, but you don’t need much of it. Look for crab paste in a jar in the Thai section of a large Asian grocery store.” Now that’s “hand holding 101” for cooking novices.

While the uninitiated diner might plead for a dictionary when looking at one of Yang’s restaurant menus — e.g., Wagyu Hanger Steak, Charred Cucumber Larb, and Sorrel-Shrimp Sauce or Corned Lamb, Mizuna, and Spicy Nuoc Cham –Yang’s cookbook makes a point of defining and clarifying the ingredients. Magic Dredge, for instance, “is an example of how we often mix flavors and cooking techniques from around the world. We wouldn’t call it ‘magic’ if it weren’t the best way to fry food since, well, flour. It’s light, crisp and holds up well like many Korean fried foods.”

Back to square one: Who is Rachel Yang? Why has she entered the fray of cookbook authors? And why should you care? Rachel Yang is a master chef. She and Thomson have produced an inspiring Korean-influenced global fare cookbook that has made blended fusion cuisine accessible for everyone. If you’re ready to try a new dining experiences and seek out awesome adventures in eating with the teachings of an excellent guide, mentor and coach, this cookbook was meant for you.