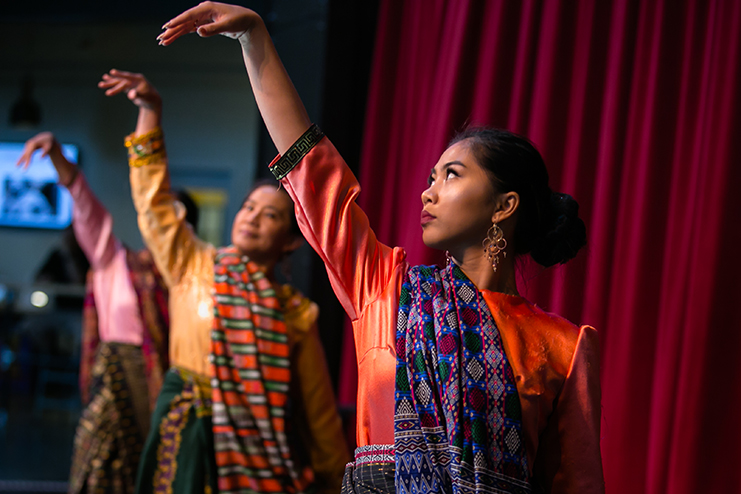 Northwest Folklife is a year-round organization that creates a variety of neighborhood and youth-oriented programs throughout the year, but its annual signature event is the Northwest Folklife Festival, which happens every spring at the Seattle Center. This year, Northwest Folklife will present its 48th festival, featuring a wide range of arts and culture from an expansive number of traditions.

Despite the large size, Northwest Folklife Festival executive director Kelli Faryar says that the festival tries to never lose sight of their ultimate focus: the artists. “Each year, over 5,000 artists and culture bearers from across the Pacific Northwest gather to perform, teach, encourage discovery and inspire at the Northwest Folklife Festival,” she said. “These artists and culture bearers donate their time, talents and traditions to share with up to 250,000 people throughout the four days of the festival. It’s extremely important for us to communicate with artists to create the most positive experience possible for them.”

Juliet OmliCawas Cheatle, a Filipina performer, feels that the Folklife staff is successful in meeting this goal. “The things that interest our group in performing for the NW Folklife are the wonderful feeling and the thought of being a part of this marvelous event that offers to visitors the opportunity to experience living traditions from different parts of the world,” Cheatle said.

She also feels that the Festival allows artists to learn and receive, in addition to teaching and giving. “Taking part in the live performance will also make our members respect and appreciate other cultures other than their own,” she said. “Performing for Northest Folklife is another way for us to give back to our community by entertaining them and sharing with them the unique, beautiful and colorful culture of our mother country, the Philippines.”

Cheatle’s Filipino dance companies are fairly new to the Folklife Festival, with the Filipinas Performing Arts of WA State (FPAWS) performing for their third year, and the FCS-Kalahi Philippines Dance Company performing only its second time in the festival. But that only makes their participation more important. “Filipino folk dances are not only colorful, beautiful, lively and entertaining,” she said, “but they also express the unique Filipino culture and identity.”

Within the festival, certain cultural traditions are presenting showcases that feature several performance groups. “The Hawaiian Showcase has a long, rich family history as it was first curated by Hawaiian culture bearer and community pillar, Moodette Ka’apana, also known as Aunty Moody,” Faryar said. “For over 30 years, Aunty Moody served as a Community Coordinator for Northwest Folklife until her passing in 2015. Since then, her sister, Jaydeen Robinson, has continued the tradition at the Festival.”

Robinson, who teaches with Halau Hula (or dance school) Pulamahiaikalikolehua, is happy to take on the responsibility and the pleasure of sharing Hawaiian culture with the Pacific Northwest. “Our Halau mission is to preserve and perpetuate the art of Hula through the teachings and stylings of Ma’iki Aiu Lake,” she said.

Likewise, Gloria Nahalea, who is a Kumu Hula, or Master Teacher of Hula, has enjoyed sharing her Hawaiian heritage over the past thirty years through dance school Halau Hula O Napualani. “We have enjoyed the sharing of the stage with other Halau groups,” Nahalea said, “seeing friends and other groups perform.”

According to Jingco, the Hawaiian Showcase will celebrate the dance and music of four long-standing Halau’s in the Seattle area: Nā Lei O Manuakepa, Ke Liko A’e O Lei Lehua E Kapuaokalani, Halau Hula O Napualani, and Hālau Hula Pulamahiaikalikolehua. These four groups will also perform a culminating collaborative dance on Sunday, May 26, starting at 11:00 AM in the Bagley Wright Theatre.

All four groups extend the invitation for the public to attend. “For just a moment in time, let us take you to the Hawaiian Islands,” Robinson said. “We will entertain you with Hawaiian dance, music and storytelling. Aloha!”