Yeonmi Park is 22, but she’s seen more tragedy and horror than most people have in their whole lives. After escaping from North Korea in 2007 at the age of 13, she and her mother faced hunger, exploitation, and detention on the way to the safety and freedom of South Korea. Park now lives in New York. She released a memoir in September 2015.

Park told her story at the University of Washington on January 16 to a crowded room in the UW’s East Asia library—seats ran out quickly and dozens of people had to stand.

The event was organized by a student club on campus called The Human Rights in North Korea (THINK), which has hosted several North Korean refugees speakers previously. The club’s founder Hwayeon Myeong was a human rights activist while an undergraduate in South Korea. Myeong said she hopes talks by North Korean defectors can inspire real action.

“We are trying to make people engage in actions that have legal power or can lead to social movements,” she said. “I think [a] personal story really matters because their voice makes people realize that they are human beings like us, just around us, and it’s really immoral to not take any actions for them, because their story is real.”

Park recently became famous around the world after she gave a much-watched speech at the One Young World Summit in Dublin.

Though Park speaks English, she told her story in Korean, so that Korean immigrant communities could be included. The talk was translated into English by THINK alumni advisor Jessica Kim.

Park told of growing up in a small town in North Korea, with two parents and a sister. “We were a normal family,” she said. “At the time I had no idea North Korea was an enclosed country.”

Propaganda suffused everyday life. In school Park recalled a question in math class: If two people each killed two Americans, how many dead Americans would there be?

Park’s father was arrested and imprisoned for illegally trading precious metals, and her mother was also taken in for questioning. Park and her sister, ages nine and 11, had to survive and feed themselves on their own. Three years later her father was released, and the family moved to a town near the border with China. Park remembered seeing lights across the border in China. “How can they have lights and we don’t?” she wondered.

Hunger was the main driver for the family’s escape from North Korea into China.

“At the time our hope wasn’t to get better lives or a better future, it was more like we’re so hungry, we need to feed ourselves,” she said.

Park’s sister left for China with a friend, and Park and her mother soon followed, aided by a people smuggler. Park thought things would get better.

“When I was leaving I thought wow, this must be the end of my suffering, and I was hoping for a better future with food and money, but when I entered China it was like starting living in hell.”

While in China, both she and her mother were sold by human traffickers. A man demanded to have sex with her or else send them back. When her mother protested, the man raped her mother instead, in front of her.

At the time, Park said she couldn’t understand the concept of selling a human being. She herself was raped, and she says she was just one of many young girls fleeing North Korea who are exploited by human traffickers in China.

Park’s father joined the family in China, but he died of cancer when Park was 14. She had to bury his ashes at nightfall, for fear of being arrested by the Chinese authorities. After this, Park and her mother left China, crossing the Gobi desert into Mongolia.

In an interview with The Daily Beast, Park described being detained and badly treated by Mongolian authorities. Eventually, she and her mother ended up in South Korea, the “beginning of a second life.”

In South Korea life was easier, though Park had new adjustments to make.

At the South Korean airport, she stole some toilet paper, thinking the flowery-patterned paper was valuable. She had to learn new words, like “supermarket.” She faced discrimination in South Korea—one of her professors said North Korean defectors are potential terrorists.

Park said it was after she gave the speech in Ireland, she realized “justice was alive in the world.”

Park is upset by people using North Korea and Kim Jong-un as nothing more than a punchline. She herself has no problem mocking his haircut—but she hopes people can continue the conversation beyond jokes. “He is not a joke for me,” she said in an interview after the talk. “He killed my people, he’s killing my people. Because of him I have an unimaginable price to be free, to escape. He’s still threatening me, he’s still trying to silence me. I’m not still a completely free person.’

Audience members had a chance to ask questions after the talk.

Park said she sees North Korea as a human rights issue primarily, and doesn’t feel qualified to offer political opinions. Still, she would like to see China challenged for its practice of returning North Korean refugees to their country of origin. She suspects many nations don’t challenge China because it’s such an important trading partner.

She also compared the amount of media attention ISIS gets to that of the North Korean regime. “I hope you guys can make the issue exciting for politics,” she said.

One audience member asked why North Koreans don’t rise up. Park said it’s not an issue of ignorance. “As you can see, I’m not that stupid,” she said. Rather, she said, North Korea is a world of George Orwell-style doublethink (she mentioned the book by name), with no freedom of movement. It’s also a place with no freedom to express love. A turning point in her life, she said, was watching Titanic. “I’ve never seen movies where people are dying for love.” It was unimaginable. “The only love you can express in North Korea is for the regime.”

Park said there are many things she misses about her homeland—like celebrating the new year. “To me if there’s no dictatorship, I love North Korea. It’s my home, my country.” 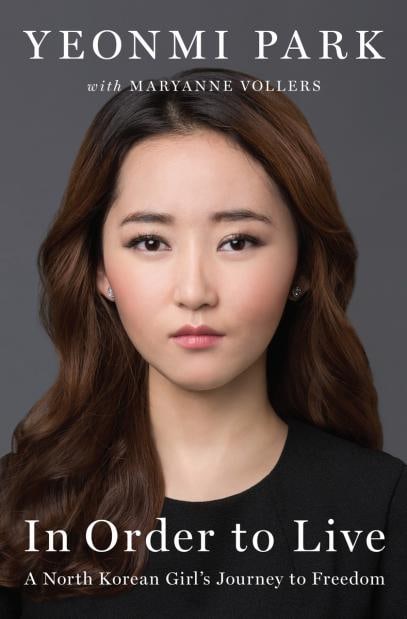 Yeonmi Park answered the following questions with the International Examiner:

International Examiner: Have you given any thought to what makes you different from other North Korean refugees or defectors?

Yeonmi Park: It’s a pretty humbling question, right? There are great people who are risking their lives. North Korea attempts to send assassination attempts to kill my fellow defectors and South Koreans speaking out. I’m not as brave as they. I don’t know what’s really the difference, but I think I can just speak English—I think that’s all.

IE: How did you find the strength to survive everything you’ve been through?

Park: I think through my journey the thing that I’m thankful for is that I know how to have a perspective, you know? Life is about perspective to me. And it’s hard—even life in freedom is not easy. Personally I’ve faced lots of death in my life, and I feel like this life is really an extra life to me, and I have an opportunity to do something bigger than for myself, and I see that as a glorious life. I mean how many people have this opportunity to do something bigger? And that’s why I’m so grateful for it. And I’m so thankful for my past as well, because that taught me what it really means to be resilient in every circumstance.

IE: Growing up in North Korea, what were things you weren’t aware of about the outside world?

IE: When you were growing up were you aware of things like the labor camps?

Park: Absolutely, yeah. My mom told me don’t whisper, birds and mice can hear you. I knew if I said something wrong I would go to that camp … and I knew that when I was very young.

IE: How do you view your identity—as North Korean, American, just as Korean?

Park: I’m a Korean and human being. I’m not North or South Korean, I’m more just Korean, and I’m a human being and I’m a woman, so that’s my identity, simple.

IE: What should Americans who want to help people in North Korea do?

Park: There are many things that we can do, like you are coming here to hear what we have to say, what’s happening on the other side of the world, in the darkest place. And the other thing we can do is taking actions. There are NGOs helping these issues, they are trying to pressure China to try to rescue people. I think those [are] things that we can do easily. I think if you just rely on technology—if you go to Google and just type in “NGO defectors,” “North Korean defectors” it will come up, and you can find ways to involve with the issue.

IE: You mentioned in your talk that sometimes North Korea is seen as a joke by Americans. What did you think when you first encountered this attitude? Where do you think this attitude comes from?

Park: I mean I felt like—he [Kim Jong-un] is not a joke for me. He killed my people, he’s killing my people. Because of him I have an unimaginable price to be free, to escape. He’s still threatening me, he’s still trying to silence me. I’m not still a completely free person. They couldn’t really get that. But I am happy that we have freedom to make fun of him here. I think because we are free we can do anything we want, and that’s the joy of, that’s the beauty of freedom.

IE: The issue of refugees is a very pressing one in the news lately, especially refugees from Syria, and I was wondering what you think about this situation and the responses to it?

Park: I can just talk about it as a personal issue. I was there once, a refugee, couldn’t find a home in China, being sold as a child bride for around 300 dollars. These people are not that different—they deserve what we deserve here, and I hope we consider the possibility that we all can be free, so that’s what I can say on the issue.