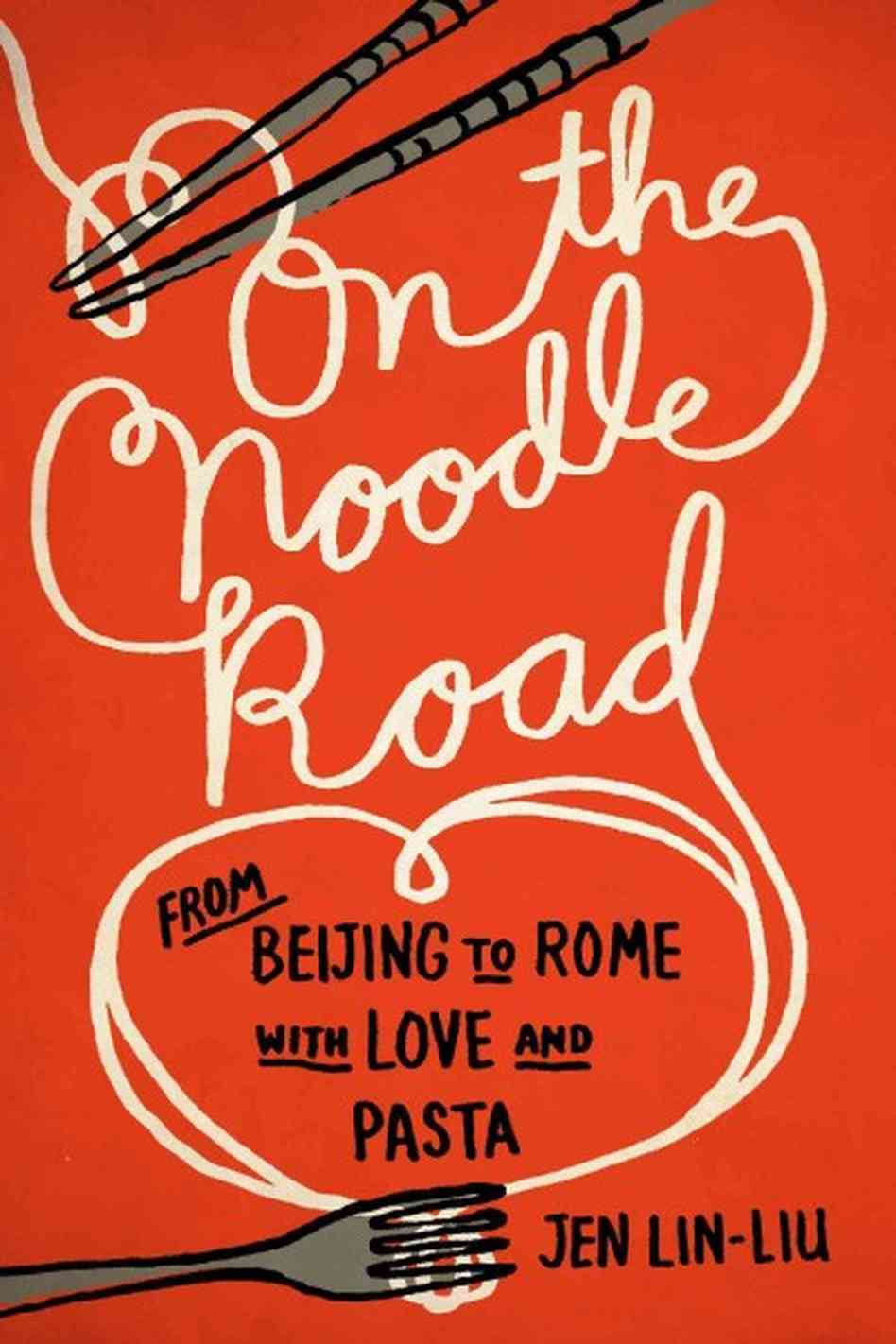 Most of us are familiar with the tale that Marco Polo (the merchant of Venice) carried off the secret of noodles to Italy in his backpack after serial adventures in Old Cathay. Not true. Italians dined on pasta long before his birth. But how was it that two nations (China and Italy) so definitively separated by cultures and physical locations, were creating noodles that were strikingly similar? This was a question that set author Jen Lin-Liu on a 7,000 mile Silk Road journey of discovery.

First-generation Chinese American Lin-Liu has written her second food-focused homage to adventure travel and Chinese cooking. On the Noodle Road: From Beijing to Rome with Love and Pasta (Riverhead Press), was released this summer. Her first book, Serve the People: A Stir-Fried Journey through China (Harcourt), was published in 2008. Two back-to-back road trip books centering on the cuisines of the Middle Kingdom. Kind of makes you go “hmmmm” and wonder if another sequel may be in works. Pork Bellies: Tripping Through Pig Politics in the PRC, perhaps?

Born in Chicago and raised in Southern California, Lin-Liu struggled over her identity as a Chinese American. She attended Columbia University, studied Mandarin, went to China as a Fulbright Fellow in 2000, attended cooking school in Beijing, interned in restaurants and cooking schools in Shanghai and Beijing, became a nationally certified Chinese Chef and—after reviewing restaurants for years, writing food articles and holding cooking classes in friends’ homes in the country’s capital—founded a cooking school/restaurant in 2008.

Located on Black Sesame Hutong (a narrow alley in one of Beijing’s oldest neighborhoods, dating back 700 years) and situated in a small, renovated courtyard space north of the Forbidden City, the Black Sesame Kitchen provides authentic home-style Chinese private dining and cooking classes augmented with bi-monthly wine and dine parties.

To date, Lin-Liu’s pint-sized, 24-seat restaurant has garnered high praise and awards. Featured in major food and upscale magazines both in China and abroad, it was included in the latest edition of 1,000 Places to See Before You Die. In 2012, it garnered accolades as one of the top 10 restaurants in Beijing; in 2013 it was ranked number one of 6,405 restaurants there, and received a Certificate of Excellence. Traveling to Beijing? Check out Black Sesame Kitchen Restaurant at: www.blacksesamekitchen.com. Interested in a Chinese cooking class? Call: +86-136-9147-4408 or email [email protected]

So, how did this dynamo, who writes about food, culture, and travel for The New York Times, Wall Street Journal, Newsweek, Travel + Leisure, Saveur and other publications—while opening up a highly praised restaurant in China’s capital, honeymooning in Italy, moving five times, attempting to maintain a relationship while juggling the needs of two careers and simultaneously bouncing between two countries, traveling thousands of miles, and giving birth to a daughter (now almost two)—find the time to write a “who-done-it-to-whom-why-and-how” about noodles?

One could blame it on her husband, China policy scholar Craig Simons, a former Asian bureau chief at Cox Newspapers and a Newsweek China correspondent. According to the author, “I am especially indebted to Craig, who cheered on my crazy idea to travel for six months across barren deserts, mountains, and green pastures through bazaars, mosques, and kitchens in search of noodles.” He had also gifted her with a cooking class in Italy, where pasta was the featured ingredient, culminating in the Aha! moment that lead to the origin of her “crazy idea.”

A quick study, she connected the saucy dots between the mein in China and pasta in Italy and voilà!—Hánxù! (Chinese), Qui e! (Italian)—a thought, a question, and a mission were born.

Though half a world away from each other, the similarities between China’s mein and Italy’s pasta were unmistakable. But “how”—through what means—she wondered, had the links between them emerged and developed? Lin-Liu was determined to find out.

Another, perhaps more compelling, reason for her quest was the author’s personal need for self- reflection: “Traveling through cultures that straddled East to West, I figured, might reconcile what I’d felt were opposing forces in my life …” Could the answers she sought be resolved via a research journey along the Silk Road? Would the path from Beijing, the eastern-most point of the road, to Italy in the west result in positive outcomes in her search for noodle roots, recipes and self?

During her six-month travels, Lin-Liu discovered fascinating moments in cultural exposures that led to keen insights into the little-known, isolated societies she encountered along the way. Her focus on learning about women’s roles in the areas she traveled, and the diverse cooking traditions of ethnic populations, fulfilled her expanded vision of the noodle’s creative transformations and the movement of edible ingredients that followed the Silk Road.

Among the pots and pans of foreign kitchens, she exchanged differing views of family, philosophies, and food. The lives of the women, children, and families she visited came to life in ways she had not anticipated. In travel you learn as much about yourself as you do about others. By book’s end, the author had not only managed to chase down noodles and recipes across a long, often rugged terrain, but had begun the elusive process of coming to terms with her life, her marriage and herself.

My first quick skim of the author’s hefty 388 page hardback revealed not a single saliva-inspiring shot of shiny, mahogany-skinned roast duck, or fragrant, steamy black cod, or mu shu anything! A foodie fanatic, I was plunged into a deep sulk. What is the world coming to when a book about food has absolutely no baked, broiled or stir-fried Photoshopped glossies to ogle and lust after?

Following that first shocking revelation, I determined to find something in the book into which I could imagine sinking my four crowns and 28 permanent teeth. And so it came to pass. At the end of each of the five major book sections (China, Central Asia, Iran, Turkey, and Italy) recipes appeared, like scattered morsels of meals-to-come, enticing—nudging—the reader to move from one section to the next. “Mmm-mm,” said I, “Mmm-Mmm-Mmm!”

“Narrowing down my list of recipes for inclusion in this book,” Lin-Liu wrote, “was painful.” There are 30 recipes in all, including: Chuchura (Uighur Wontons), Mantai (Uzbek Steamed Dumplings), Su Börek (Turkish Lazagne) and Orecchiette Con le Cime di Rapa (Italian Orecchiette with Turnip Tops). Some recipes, like the Iranian saffron chicken, have no trace of a noodle’s presence. And several use rice as the carb of choice. All recipes have been adapted to the American kitchen (no kilos, grams or liters; no tormenting conversions required) and to U.S. pantries (most ingredients can be found in a well-stocked grocery store or ethnic market; substitutions are at times suggested). At the end of its Noodle Road book review, Bon Appétit magazine wrote: “These recipes have not been tested by the Bon Appétit Test Kitchen.” A heads up warning for those who worship at the alter of BA? My snickering advice: Throw caution to the wind; take the risk.

Lin-Liu’s book is more than a research document, more than a recipe book, more than a personal journal. It’s a bit of all three with a dash of panache. An enjoyable read, her writing style is intelligent, conversational, engaging and tinged with humor—like a visit with an old best friend.

In a speech he once made to a graduating class, Woody Allen described his view of success: “The trick is to avoid the pitfalls, seize the opportunities, and be home by six o’clock.” Applied to the book, I’d say: “Two out of three’s not bad!”