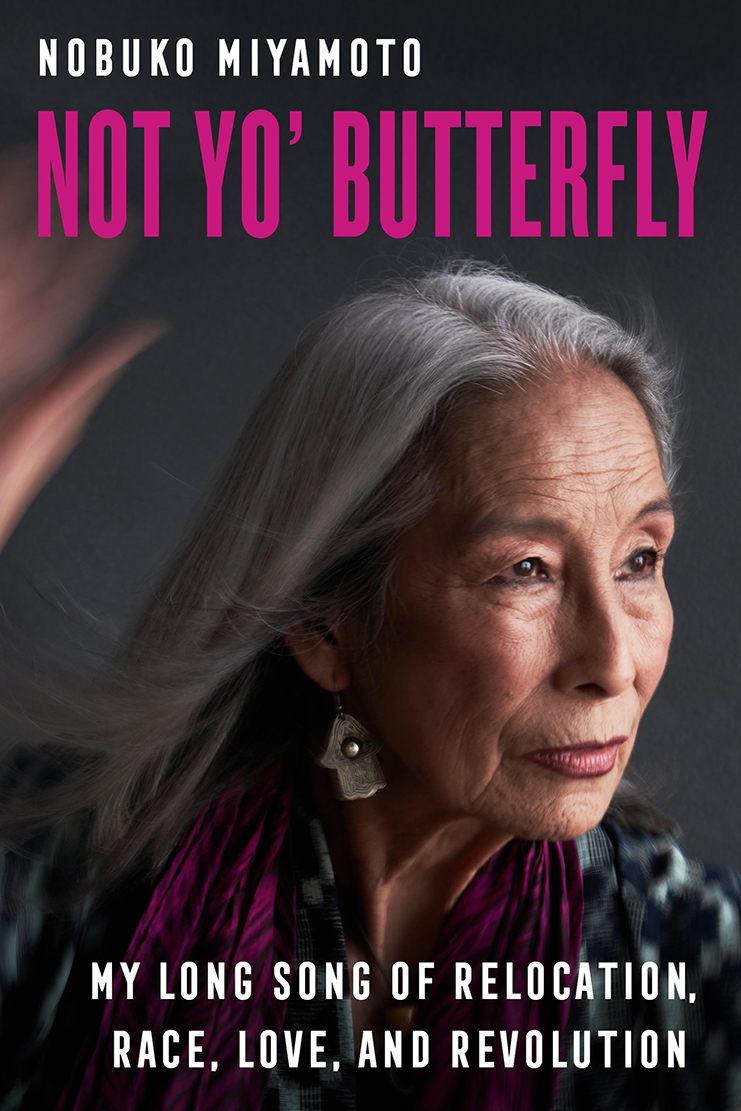 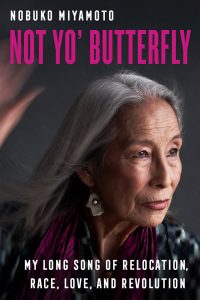 Reading artist and activist Nobuko Miyamoto’s illuminating and inspiring memoir, Not Yo’ Butterfly: My Long Song of Relocation, Race, Love and Revolution, feels like being regaled by a beloved relative sharing wisdom through stories from her life. A pioneer in Asian American arts and advocacy, Miyamoto is a boundary-crosser and bridge-builder whose remarkable familial, cultural and political journeys offer valuable lessons in transformation, courage and integrity.

Regardless of whether readers are familiar with the genesis of the movement for Asian American equity, which began in the late 1960s, Not Yo’ Butterfly is an amazing first-person account of how young people were at the forefront of developing Asian American identities and political power. The book also provides a rare look at the struggles of Asian American performing artists during the years when it was a novelty to see Asians in theater, film or television productions.

Organized in three “movements,” like a piece of music (but also a sly allusion to the political movements in which Miyamoto has been a cultural vanguard), Not Yo’ Butterfly covers three major eras of the artist/activist’s life of more than 80 years. The first “movement” focuses on Miyamoto’s childhood, youth and early career as a professional dancer and singer. Born in Los Angeles, Nobuko JoAnne Miyamoto claims a lineage of women rebels. Her paternal grandmother, a white Mormon, married a Japanese immigrant. On the other side of her family, Miyamoto’s mother chafed against her Issei parents’ expectation that she confine her adult identity to wife and mother. Instead, she studied art and married a mixed-race man.

When Miyamoto was two years old, she and her family were incarcerated at the Santa Anita racetrack with other Southern California Japanese Americans. But their stay in the camp was brief. Miyamoto’s father volunteered to pick sugar beets in Montana, taking his wife and child with him. Miyamoto’s family was nomadic for several years, moving from Montana to Idaho then to Utah before returning after the war to Los Angeles, where the family lived in four different homes before settling in the Mid-City neighborhood, an area where Japanese American and Black families lived side-by-side.

Sparked by a concert of the Utah Symphony that she attended as a child, Miyamoto inherited her father’s love of music. Young JoAnne danced to her father’s classical records, and her mother enrolled the five-year-old in dance school. Miyamoto recalls, “When I danced with the music I didn’t feel like a lost, alone, rootless wanderer. Dancing gave me a sense of place, a way to be in the world. . . . Dance was my first language, my first voice.”

In Los Angeles, Miyamoto studied dance seriously, attending dance classes daily after school. One of her teachers, a respected choreographer who created the ballet Billy the Kid, bluntly told his 14-year-old student that she would have to be twice as good as other dancers if she expected to make a living. Miyamoto understood that he said this because she was Asian, and there were few opportunities for people of color in professional dance companies.

Nevertheless, Miyamoto became a professional dancer while still attending high school. She appeared in the film versions of The King and I and West Side Story, stage productions of Kismet and Flower Drum Song, and in television and Las Vegas shows. She experienced sexism and racism within and outside the performing arts world but didn’t have a conceptual framework or language to express her feelings. “I was part of the confused generation that looked Asian but felt American. I felt trapped by that dichotomy and the limitations it imposed,” she explains. The dawning of her political consciousness began when she appeared on Broadway in the original production of Flower Drum Song. She became aware that the musical was like chop suey (the title of one of the songs in the show): an American invention, not something authentically Asian, for the consumption of white American audiences.

The second “movement” of the book focuses on Miyamoto’s political awakening and the development of her social justice activism. The catalyst was her relationship in 1968 with an Italian filmmaker who was producing a documentary about the Black Panthers. Interacting with members of the revolutionary group, Miyamoto understood that they were working towards larger social and political goals. Accompanying her boyfriend to New York to continue work on the film, she met Yuri Kochiyama, a Nisei activist who was steeped in revolutionary political organizations in her Harlem neighborhood and beyond. Through Kochiyama, Miyamoto met Asian Americans unlike any she had known before: they were politically radical and accepted her for who she was. In their company, she didn’t feel like a minority. For the first time, she knew that she didn’t have to be twice as good to prove that she was worthy.

Miyamoto conveys the breathless excitement of her developing political consciousness, which enabled her to understand how her individual experiences of racism and sexism fit into larger systems of oppression. She captures the thrill of meeting like-minded people, especially young activists, involved in movements to end the Vietnam War and to combat racism in the U.S. She shares the exhilaration of meeting the young Sansei activist Chris Iijima, and channeling their talents as singers and songwriters to become bards of a social movement. The duo, which eventually teamed with guitarist Charlie Chin, performed mostly in universities, Asian American churches and temples, and community gatherings, connecting with young people across the country in a shared identity as Asian Americans. Thanks to the advocacy of Yoko Ono and John Lennon, Miyamoto and Iijima performed on The Mike Douglas Show, a popular day-time television show in the late 1960s and early 1970s, unnerving the program’s producers that the pair’s revolutionary song about Asian American identity would upset white suburban housewives.

Most of the second movement of the book centers on Miyamoto’s activism during the early 1970s in New York, including protesting the displacement of low-income Puerto Ricans, Dominicans and Blacks from gentrifying neighborhoods, and taking over abandoned buildings, transforming one into an Asian American drop-in center and another into a multicultural coffeehouse and community gathering space.

In New York, Kochiyama introduced Miyamoto to Attallah Ayubbi, a Black Muslim activist with whom she had a son, Kamau. Ayubbi encouraged Miyamoto to use her given Japanese first name, Nobuko, instead of her English middle name. Ayubbi was murdered 10 weeks after Kamau’s birth. As the parent of a Black-Japanese son at a time when mixed-race children were rare, Miyamoto had to contend with anti-Black sentiment among Japanese Americans, including her mother.

After living in New York for several years, Miyamoto moved back to Los Angeles with young Kamau. The third movement of the book focuses largely on Miyamoto’s growing cultural activism. Initially teaching community dance classes at the Senshin Buddhist Temple upon her return to Southern California, Miyamoto expanded her work by integrating arts and activism through collaborations with Asian American musicians, dancers, writers, and actors to create shows that captured the realities of Asian American lives. A grant from the National Endowment for the Arts in 1978 allowed Miyamoto and her artistic partners to form Great Leap, a nonprofit arts organization through which Miyamoto has developed and produced cultural performances for more than 40 years.

Miyamoto has partnered with other artists of color on various projects. In response to the 1992 uprising in Los Angeles after the police officers who brutally attacked Black motorist Rodney King were acquitted, Miyamoto worked with Black and Latinx performers to create a theater piece sharing the stories of people of color. Great Leap toured the show in schools and universities nationally.  More recently, she co-created with Latinx musicians a multi-cultural participatory event, FandagObon, which blends Mexican and Japanese music and dance traditions.

Miyamoto’s conversational voice makes Not Yo’ Butterfly a pleasure to read. The compelling stories she shares are invaluable, documenting more than 50 years of progressive Asian American activism and cultural production.

About two-thirds into her book, Miyamoto reflects, “I was a person who always seemed to break from normal. Sometimes you have to disrupt the normal to make the world you want to live in.“ Whether or not we have ever seen Miyamoto perform, we have benefited from her disruptive work, because she has been a visionary leader in building multicultural connections through art. In Not Yo’ Butterfly she shows us why and how she’s done that.