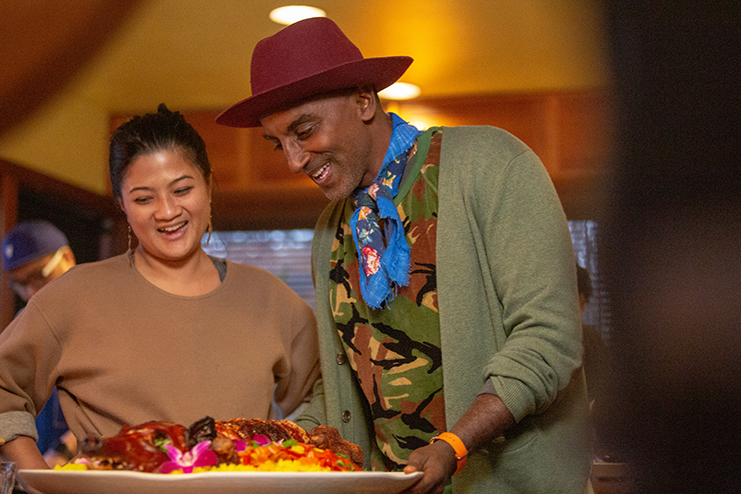 It’s no secret, Americans have a love affair with food. The growing popularity of culinary TV shows, podcasts, and magazines are proof this trend is here to stay. And now the new season of No Passport Required gives PBS viewers a chance to explore America’s diverse food cultures with the help of its charismatic host, acclaimed international chef, Marcus Samuelsson

In Season 2, Samuelsson also returns as executive producer and travels to six different cities across the U.S. Throughout the series, he explores the food and cultural history of various immigrant communities from the Italian Americans in Philadelphia to the Armenian community in Los Angeles. In the premiere episode that airs December 13, the show highlights the culinary traditions of the Filipino American community in Seattle and how they are defining and reinventing their traditional cuisine in this vibrant food city.

“Most Americans have no idea what’s in a Filipino dish,” said Samuelsson as he launches into this first episode of this second season of No Passport Required. But like the first season, this show is much more than just about recipes and ingredients. It digs deeper into a culture and personal life experiences of those who host Samuelsson as he explores their culture and food, which allows viewers to better understand and appreciate the historical context of each immigrant community in the U.S.

In the Seattle episode, Samuelsson explores the success stories of a number of young chefs making a prominent name and a place for themselves in Seattle’s food ecosystem, including Melissa Miranda, the founder of the popular Filipino pop-up, Musang.  She relayed to Samuelsson during his visit to her family home that it was her dream to turn her pop-up into a brick & mortar restaurant. We have since learned since that episode was filmed that Miranda’s dream is coming true with Musang Restaurant set to open in Beacon Hill later this month.

“People fail to realize that the Philippines is made up of islands and there are many versions of dishes that people have experienced or taste,” said Miranda in the episode. “I just want it to be something that is an honoring of myself to my family, and I hope we are doing it justice.”

While Samuelsson gets to eat traditional dishes with Miranda and her parents in their home kitchen, he also visits a number of Filipino eateries in the Seattle area from the longstanding Ludi’s on Second Avenue (which has since closed) to the Oriental Mart inside Pike Place Market where head chef and owner Leila Rosas tells him, “You’re welcome in this kitchen anytime. And I don’t say that often.”

Samuelsson also visits Hood Famous Café + Bar to eat ube cheesecake with co-owner Chera Amlag in the International District Chinatown. He shops with Geo Quibuyen – owner of the Filipino pop up restaurant Food & Shit and co-owner of Hood Famous Café + Bar – at the market Foulee, where Geo tells him about the regional Filipino farmers who supply the Filipino markets. And he also gets out of town to go squid jigging in Edmonds with Brian Madayag, owner of the Hawaiian Filipino restaurant Barkada, and members of his family.

And he visits South Seattle’s Archipelago restaurant that serves fine dining dishes inspired by Filipino traditions and Pacific Northwest ingredients, where  Aaron Verzosa is the owner and executive chef.

“It was memorable for myself and my family to meet chef Samuelsson because of the impact he’s had not only on our industry as a whole, but specifically with chefs of color from marginalized communities,” said Verzosa. “To share a table with him and hear that what many of us are doing in the Pacific Northwest brings great value simultaneously to our city and industry is something I always take with me moving forward.”

Samuelsson, an immigrant himself who was born in Ethiopia and raised in Sweden, talks throughout the episode about how Filipinos, like many other immigrant groups, see their cuisine as not just a source of pride but also a way to connect to each other as well as people from other backgrounds.

“We have only begun to scratch the surface of the amazing range of immigrant cultures and cuisines found in the U.S.,” said Samuelsson. “It’s exciting to go on this journey once again and bring attention to these diverse communities that contribute so much to our nation”.

In Season 2, Samuelsson makes his way to Seattle, Los Angeles, Houston, Philadelphia, Las Vegas and Boston. The six-part series will run on Seattle’s PBS station, KCTS 9, on Mondays 9-10 pm from January 20th through February 17th. A special will run on Friday, December 13: Samuelsson and chef Vivian Howard of new PBS show Somewhere South will provide glimpses of their upcoming seasons from 8:30 to 9 pm. EST. Then, No Passport Required’s first episode on Filipino food and culture in Seattle, will air at 9:00 PM EST.

For more information: www.kcts9.org. Season 1 is available online at www.kcts.org and also through the Seattle Public Library.

No Passport Required is produced for PBS by Eater and Vox Media Studios.