One week before the recent filming of the Ninja Warrior competition in Yokohama, Japan, competitor Hoan Do, 28, hurt his ankle on a bad fall during a trip to Trampoline Nation. Do had been training for the competition for two and a half months.

Do had hurt his ankle and was on crutches that Monday. By Friday he was walking and getting ready to compete in one of the most notoriously difficult obstacle courses in the world.

Ninja Warrior is an edited-for- American-TV version of the Japanese show Sasuke. Its famed obstacle course has challenged freerunners, athletes, and thrill seekers throughout the world since 1997. Of the thousands who have attempted the competition, only a few hundred have even made it past the first round. You can count the number of people who have even completed all four rounds of the course on one hand.

Do was able to bounce back from his injury with a combination of ice and heating, laser therapy, acupuncture, physical therapy, and positive thinking.

While Do’s injured ankle caused him some frustration, it was just another obstacle to overcome.
“One of my big beliefs in life is that everything happens for a reason,” Do told the International Examiner during a phone interview the day before flying out to Japan for the competition. “While we can’t always control what happens to us, we can control what we do about it.”

These are words that Do lives by—and asks others to do as well. Aside from being a world-class athlete, Do is an inspirational speaker, youth mentor, and author.

Raised by poor immigrant parents who nearly lost their lives to escape the Vietnam War, Do grew up in Federal Way, Washington. After graduating from Pepperdine University in Malibu, California, Do has spent the last six years traveling the country as an inspirational speaker and corporate trainer.

When asked about how he is able to balance his time as a speaker, athlete, and community activist, Do said he takes the time to check in on his physical, mental, and spiritual health.

He described taking time everyday to assess his health while walking and listening to music. Much like keeping a car tuned up, you have to be aware of what needs adjusting, he explained.

“I make time for me,” Do said. “When we’re stressed out, the engine light goes on. … I sing songs out loud and thank God for the blessings he’s given me. I think about the goals of any mission. I do that every day. I listen to my body.”

As for the odds of actually making it past the first round, much less winning the Ninja Warrior competition, Do doesn’t get distracted from what it is he has to do.

“What I focus most importantly on is my effort because that’s something I can control,” Do said. “If it happens [that I win or lose the competition], it doesn’t matter. What matters is I gave it my best.”

This is the essence of what he hopes to inspire people, particularly young people, to do, which is to do your best so that you inspire others to do the same.

To help drive this message home, Do quoted author Marianne Williamson: “We are all meant to shine, as children do. We were born to make manifest the glory of God that is within us. It is not just in some of us; it is in everyone and as we let our own light shine, we unconsciously give others permission to do the same. As we are liberated from our own fear, our presence automatically liberates others.” 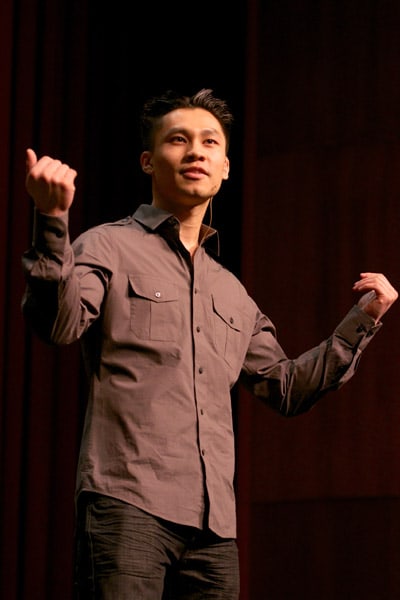 Do also has a message for Asian Pacific Islander youth, many of whom, like himself, are the children of immigrants who did not come from a lot of money.

“When I speak to students, I tell them they have to pursue their passion,” Do said. “What ends up happening for them is everybody is happy for them but themselves.”

When APIs choose a career path, they’re too concerned about whether or not it makes money, Do explained, because of the pressure they put on themselves to make enough money to take care of their parents.

“All Asians have that pressure,” Do said. “What helps is to have candid conversations with your parents. Have faith. When you constantly communicate, problems get solved. Problems happen when you don’t communicate.”

The most important issue APIs face in the United States, Do said, is that they are not able to pursue what they want in life. He wants young people to realize that all parents truly want for them is to be happy.

“When you give yourself permission to do what you are passionate about, you inspire others to do the same,” Do said.

The results of the Ninja Warrior Competition will not be revealed until the program airs later this year. Check your local listings and tune in to see how Hoan Do did. For more information on Do, visit hoando.com.