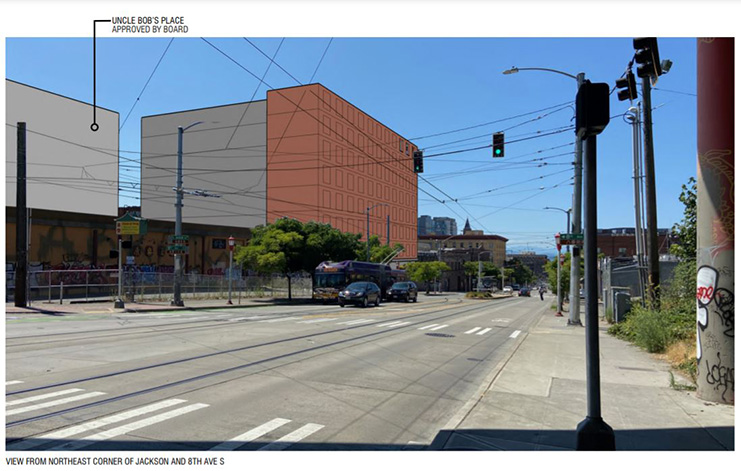 Developer O. Z. Navigator presented a proposal before the International Special Review District (ISRD) board on September 28 to build a project with 245 apartment units, ground floor retail, and no parking. A historic auto-repair garage and defunct gas station now on the site would be demolished.

During the online briefing, the board weighed in on demolition, preserving history of the site, and the initial design ideas for the project.

The site is owned by the family of Barry Mar, a Chinatown International District community leader who managed the renovation of the Atlas Hotel into low-income housing. Mar’s grandfather Mar Shue bought the property in 1921, wanting to build another hotel like the Atlas Hotel, according to a memo prepared by Susan Boyle, of BOLA Architecture + Planning, and presented during the meeting. Since then, the family held the property as an investment. Members of the Mar family are still involved in the development.

Before he passed away in 2021, Mar and the developers outlined guiding principles for the project, according to Brad Padden, co-founder of O. Z. Navigator and CEO of Housing Diversity Corporation. These principles include robust community engagement, and attracting tenants of all ages and incomes, including from the current neighborhood.

Developer O.Z. Navigator is a partnership between Nitze-Stagen — a commercial real estate investment and property management firm which renovated and owns the Union Station Parking Lot — and Housing Diversity Corporation (HDC), which describes itself as “at the forefront of the mixed-income housing movement.”

The project would include 76 congregate units and 169 small scale efficiency units. Units would be priced between 55 and 75 percent of Area Median Income (AMI). This means they would be affordable for one person making roughly between $43,500 and $59,400 dollars per year, or for a household of two making between $49,775 and $67,875 per year.

“This idea that we can provide mixed income housing for a wide variety of individuals that would like to live at the center of Asian culture in the Pacific Northwest is probably the cornerstone of our guiding principles,” said Padden in an interview. “It’s really this idea of increasing the potential pool of renters and providing kind of a real vibrancy because of the density.”

The rental prices are meant to be as inclusive as possible, said Padden, while still allowing the developers to buy the land, build the project, and “provide a reasonable investor return.” People well above the lower income limit of 55 percent AMI may choose to rent in the building for a variety of reasons, noted Padden and Lisa Nitze, Vice President of Marketing, Investment, and Community Partnerships for Nitze-Stage.

In developing ground floor retail for the project, the developer plans to target “local businesses and authentic businesses,” said Nitze, including possibly those that specialize in Asian cuisines not currently available in the neighborhood. Underground retail spaces could be used for community meetings, or elder care and physical therapy.

Padden and Nitze said they would consider hiring a property manager from the community so that people in the neighborhood are informed as soon as the units are available.

They hope the new residents would improve safety and activate the neighborhood in the evenings and nights, going to bars and restaurants.

The auto repair garage on the site was built in 1927 and is considered a secondary contributing building in the 1986 National Register nomination for the historic district. Secondary contributing buildings were considered to “have less architectural or historical significance but were constructed during the period of significance, and reflect the general historical and architectural character of the district despite moderate loss of integrity,” according to the National Register nomination of 1986. The garage has since lost more of its character-defining attributes in the 35 years since it was added to the list of nominations, according to the report presented by Boyle of BOLA Architecture + Planning. Boyle found that demolition would likely be allowed by City code, if the ISRD board approved it.

Other historic garage buildings in the neighborhood are preserved and considered contributing properties, including the building housing Theater Off Jackson and other tenants, and Saeteun’s, which is still used as an auto repair business.

Also on the site is a gas station built in the 1940s and moved to the neighborhood in 1956. It is considered a non-contributing building in the Historic District. Part of the garage is used by the New Century Tea Gallery, which has been offered a first right of refusal for new retail space in the building, according to the developers.

Mechanic Pat Abe owned and operated the 7th Avenue Service on the site from 1972 to 2015. He bought the business from Ted Imanake, who established the business in 1946 after returning from incarceration during WWII.

Board member Matt Fujimoto praised Boyle’s historical memo for highlighting the stories of people who used the property. They suggested these stories should be more widely shared, and wished additional oral histories could be incorporated in a historic report.

Board member Matt Chan asked if the future building will pay tribute to the people and history. Padden responded that the team will determine this in time. “We’re trying to figure out how to best address that in our design.”

Board members asked if portions of the old structures could be preserved and possibly given to the Wing Luke Museum. Boyle said many of the building’s distinguishing features are lost now, as are signage and objects, and that historical photos might be a better way to preserve the history.

Board members agreed with Boyle’s conclusions that the buildings were not contributing to the historic character of the neighborhood. “The property definitely does not evoke that history now,” said board member Lizzy Baskerville.

Board member Andy Yip said he was encouraged to see a project proposed on the site. “We know that site hasn’t been its best and highest use for a long time.”

The site is contaminated with chemicals and will need to be excavated 50 feet down. “There’s just a massive cleanup job that’s associated with the site,” said David Neiman, managing partner at Neiman Taber architects, during the briefing.

Board members Chan and Russ Williams worried that building so close to the property line will create an imposing wall. Chan said the renderings reminded him of King County’s youth jail, and asked if it would be possible to build a podium around the building and set back the higher levels to better match nearby historic buildings.

Neiman said the project echoes the design and appearance of the residential hotels in the neighborhood. Buildings like the Bush Hotel and Milwaukee Hotel were built straight up vertically, without much modulation in the design, because they were built to provide simple affordable housing to workers.

The Publix and the forthcoming Uncle Bob’s Place are comparative projects, Neiman said, including in their masonry, double height storefronts, and consistency and repetition in the facade.

Like the historic residential hotels, the project will consist of small units: SEDUs and congregate housing. Usually, SEDUs are like a studio apartment but with a smaller living room and kitchen. At 200 square feet, the congregate housing will be smaller than the SEDUs, and units will have a kitchenette while sharing a full kitchen with several others.

Padden said the team toured renovated historic hotel buildings in the neighborhood, including the Atlas Hotel, where 40 individuals and couples live in low-income SRO units similar to the units proposed in the project. “We’re really borrowing on the over 100-year history of these buildings that are already in the community to try to  inform the type of units,” Padden said.

“They’re quite lovely and livable and enjoyable to live in, much like a ship’s cabin on a boat,” Padden said. “You don’t have to make sacrifices to live affordably in our building.”

Baskerville asked why the project included no family-sized units, which she said are needed in the neighborhood. Padden replied that the project focused on individuals and couples because building larger units would require charging more for rent. As for-profit developers, O. Z. Navigator cannot receive subsidies or low income tax credits to offset the costs of building those units, Padden said.

Matt Chan noted that the historic SRO housing type was not the first choice for many residents. “The SRO housing was a product of racism and herding people into areas that this was the only kind of option they had,” he said. “I think when you talk about the housing that was traditionally there, you have to look at why it was there. It wasn’t built because it served them. it was there because that’s all they could get. and it wasn’t by any means a preferable type of housing supply.”

Fujimoto agreed, and suggested the developers broaden their vision.

“We of course are building in this incredible neighborhood, the CID, the only place in the entire continental U.S. where many different types of people, BIPOC peoples, settled and built these incredible structures that we’re building next to,” they said. With this in mind, “I wonder what other proposals might up before the board?”

Woo pointed out that the project is at the intersections of Chinatown, Japantown and Little Saigon, and wanted to know how the project will incorporate materials and art to fit into the Asian character design district.

Yip said the lack of parking will likely be a major question from the community and businesses, which might worry it would affect the economic vitality of the neighborhood. Even if a small portion of future residents have a car, it could add constraints to the neighborhood, which does not have much parking.

Padden responded that ISRD guidelines favor pedestrian uses, parking is not required, and would drive up the price of units. The team is exploring offsite parking options including talking with InterIm about its parking lot, and possibly offering the Union Station garage.