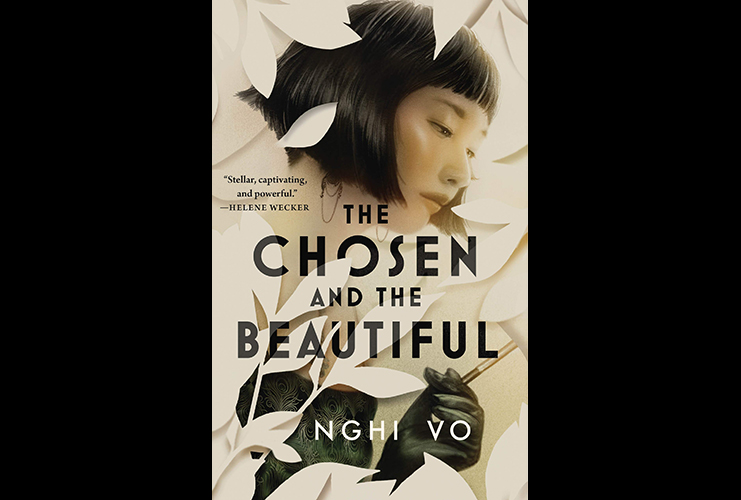 Nghi Vo’s debut novel The Chosen and the Beautiful, published by Tordotcom, glitters just as bright as the stars and lights of the city she describes. In a stunning reinvention of The Great Gatsby, Vo infuses the American classic with intrigue and magic. The Chosen and the Beautiful takes place from Jordan Baker’s point of view. In Vo’s story Jordan Baker is a young Vietnamese adoptee, and a queer woman finding her way in 1922 New York.

Between parties with the gin babies and starlets, Jordan spends the summer of with her childhood friend Daisy. Daisy’s marriage to straight-laced Tom Buchanan is tenuous and so she and Jordan spend hot summer days floating around drinking and ignoring any sort of responsibility. On one of these summer evenings Daisy introduces Jordan to her cousin Nick Carraway, of the St. Paul Carraways. In the world of socialites Daisy and Jordan thrive in, everyone knows everyone, so Jordan knows of this returned soldier and his troubled past. Jordan, Nick, and Daisy’s summers intertwine with the grandiose Jay Gatsby. Gatsby is a man said to have sold his soul and the parties he throws seem to prove it.

In between all the merrymaking and scandal hatching Jordan faces heightening discrimination towards marginalized people. When the Manchester Act, a law that would “bar the way for all unwanted unworthies from a long list of places”, looms overhead Jordan weighs her options she can leave New York of her own volition or be thrown out by the hands of the government. This crisis isolates her, since the hardest problem that faces Daisy is choosing between two men who adore her. The addition of the Manchester Act to the story of Gatsby provides a stark commentary on both race and class that is not available in the classic’s original tale. Jordan survives through hiding different parts of herself, though when she meets other Asians through one of Gatsby’s parties she must confront the uncomfortable parts within herself. Where does she belong? Can she ever truly excel in Daisy’s and Gatsby’s circles?

This world is not as it seems, instead there are layers of subtle world-building that will be even better to uncover in a reread. Vo crafts creatures out of paper and ghosts haunt the lines of sparkling prose. The Jazz Age in The Chosen and the Beautiful is sultry, sexy, and full of dark secrets. I loved the way that Vo took the classic story The Great Gatsby and made it fresh for today’s audiences. Jordan Baker is no longer a side character, reduced to being Nick’s on again off again girlfriend. Instead, Jordan makes her way through headstrong. She’s messy and complicated and like any 20 something year old today, she is figuring out how to live her life. This book’s magical realism provides a lovely hit of escapism despite the conflict feeling as current today as it was a century ago. I believe The Chosen and the Beautiful is worthy of becoming a gilded classic just as its predecessor. It is more than a retelling, it is a world in itself.