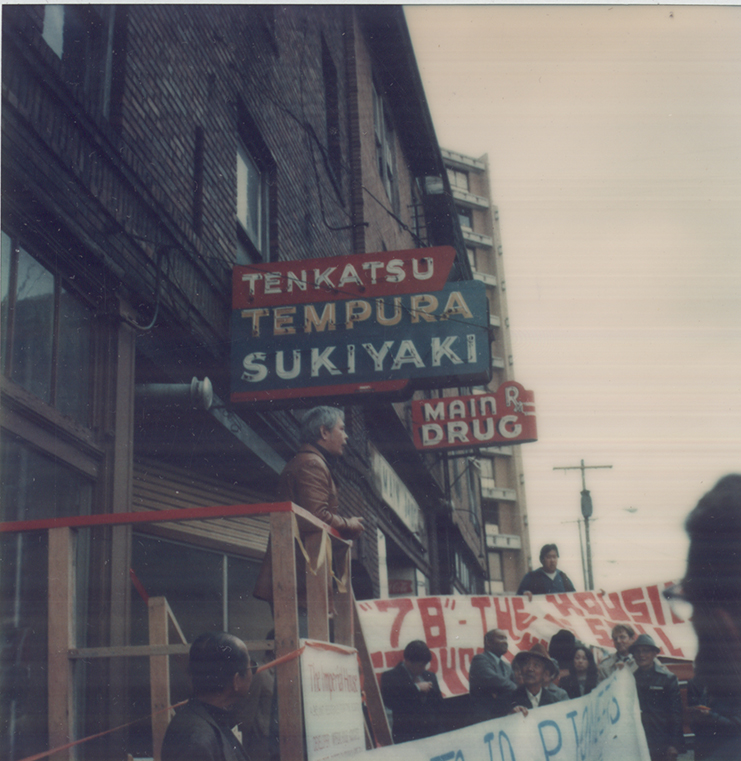 What is a home? What makes you feel like you belong and who gets to belong? Is it the people, the physical structure, or a sense of community?

These are all questions that The Wing Luke Museum’s newest year-long exhibit, Excluded, Inside the Lines, asks as it covers the history and interweaving financial, environmental and physical impacts of redlining and housing discrimination that have shaped Seattle’s history. It covers the history of a city ordinance banning Native Americans from living in Seattle to the Asian Exclusion Act to growing gentrification in the Central District, and beyond.

The exhibit is framed by historical context of the various forms of housing discrimination, from increased loans, to varied interest rates – let alone not being able to find housing in the first place. The first sight of the exhibit is a large “security map” created by the government-funded Home Owners’ Loan Corporation which highlighted in different colors the neighborhoods seen as different levels of “desirable” in 1936.

Beyond the facts and extensive documentation of redlining spans another people-centric timeline, from personal anecdotes and accounts to interactive questions that encourage everyone to think about all the smallest things that are often taken for granted when we think of our homes.

“Redlining didn’t just say, ‘ok, POC have to live here,’” said Diane Sugimura, a Wing Luke board member and the former director of the City of Seattle’s Department of Planning and Development for over 30 years. “It impacted investment in this area for infrastructure for residential for commercial. It impacted the education, the schools, the businesses, living wage jobs, a healthy environment. All of those things were a part of what they were kind of forced into. “It’s more than saying: ‘okay, we’ll find you affordable housing and everything will be fine.’”

Distilling such history and a wide range of stories into one exhibit was a challenge faced by the main text writer for the exhibit, Cynthia Brothers. She is a lifelong Seattleite and the founder of Vanishing Seattle, which “documents the displaced & disappearing institutions, small businesses, & cultures of Seattle – often due to gentrification and development – and celebrates the spaces and communities that give this city its soul” by posting on various Twitter, Facebook and Instagram, according to its website.

“This history is a complex set of overlapping factors. It’s not like this stuff fits squarely into one issue, like housing for example. It brings in fractures of our community, access to schools and resources, and then the community response to all of it,” said Brothers, who was selected by the exhibit’s Community Advisory Committee, made of local community members, to help with the exhibit.

The mix of voices collected from local organizations to local committee members represents the wide narrative that the exhibit spans. One main goal of the exhibit is emphasizing the unique community resilience that redlining brought out of the community.

“There are the beautiful things that came out of this legacy of injustice, and I think the exhibit and planners were intentional about wanting to have that piece be very much in the forefront as well,” said Brothers. “I think storytelling was one of the most impactful ways to get that across, because it really is about the communities that are attached to these places.”

The strong bonds across the city that have been formed as a result of these pushes is at the forefront of the exhibit, highlighting quotes by people who have personally experienced displacement or their family and friends have been displaced. There are unprecedented community organizations and friendships that came out of a fight for civil rights, such as the group known as the Gang of Four which was made up of local community activists and politicians Roberto Maestas, Bernie Whitebear, Bob Santos and Larry Gossett.

“Because they were forced together, they actually came together, as community,” said Sugimura. “It was a community finding their voice, demonstrating, marching, trying to do things to improve their community.”

These networks stretched throughout historical Seattle, but the exhibit’s opening night on March 7 aimed to share these diverse stories and networks among a large audience to bridge the gap between the stories of then and now, between historical and contemporary Seattle.

LaNesha DeBardelaben, director of Northwest African American Museum, and Sharyne Shiu Thornton and Jania Garcia, who are both on the Seattle Indian Health Board’s board of directors, presented at the exhibit, alongside the Joe Brazil Legacy Band, which honors a prominent figure in Seattle’ jazz scene.

“We want this exhibit to prompt conversation, to learn from others in terms of what did they experience,” said Sugimura. “Did your family or friends ever experience this, or are they still experiencing it? And moving forward what can and should we be doing to help with the understanding and to help with the gentrification?”

Tying together the past and present of Seattle in terms of displaced populations throughout the city is something that Vanishing Seattle is tackling in its social media postings every day.

“Displacement and dispossessing people of their land and their culture, we’ve been doing that ever since the first settlers arrived here. We come from that legacy, and we’ve been shaped by that legacy and it’s still happening today even if it doesn’t look the same,” said Brothers.

But to Brothers, at the end of the day in Seattle, the removal of a local dive bar, grocery store or barber shop isn’t just about that physical space that’s left open, it comes down to the community that exists in the wake of displacement.

“In Vanishing Seattle, we’ll post pictures of buildings and spaces, but it’s really about the people who are connected to those places, how has the existence of this place helped facilitate that survival of communities that find shelter or culture or other types of community there,” Brothers said. “I think the soul and our character of our city and what has defined us and what makes Seattle a world class city comes from artists and culture and elders and families. You need a diverse cross section of people in order to make it a world class city.”

Seattle’s growth is not new, and in looking at the effects of city growth then and now can be at times shockingly similar.

Sugimura has been involved in the Wing Luke Museum community since the 1970s while completing an Urban Design and Planning degree at UW and looking at the impacts that new projects, such as the building of the King Dome, would have on the CID area.

“In those days it was the loss of affordable housing, the loss of community businesses and traffic and impacts. Still the issues as today,” said Sugimura. “A city needs to grow and change, the question is how does it grow and change?”

The exhibit has been produced by partnerships with the Northwest African American Museum, the National Park Service and a variety of other community sponsors as well. An effort to bring the exhibit outside the walls of the museum and into the community is being incorporated with a Redlining trail which integrates various businesses and places important to various communities at the time of the exhibit, from where the Native Americans first landed, through the CID and down towards the Central District.

The exhibit will be open for about a year and in the meantime both Sugimura and Brothers are hoping to engage the community to learn and share their stories as much as possible.

“Hopefully they will learn something that prompts them to change something in their life,” said Sugimura. “If you’re a realtor and you see the exhibit, what can you learn here about what the real estate industry has done in the past, not to just affect where people live, but much longer term in terms of access to opportunity, education, jobs, etc, in terms of the kind of community they lived in.”

The Excluded, Inside the Lines exhibit holds narratives that aim to show everyone, from the newest Seattleites to those who have lived in Seattle for generations, what voices have shaped the city we know today.

“Right now in Seattle and especially in formerly redlined communities, we are facing a displacement state of emergency,” said Brothers. “Whatever tools they have at their disposal, I hope that people who come to the exhibit use their own power, their own privilege or their own voice to support other folks who are fighting for their own communities.”

The exhibit is at the Wing Luke Museum and is free to the public and open until February 23, 2020.