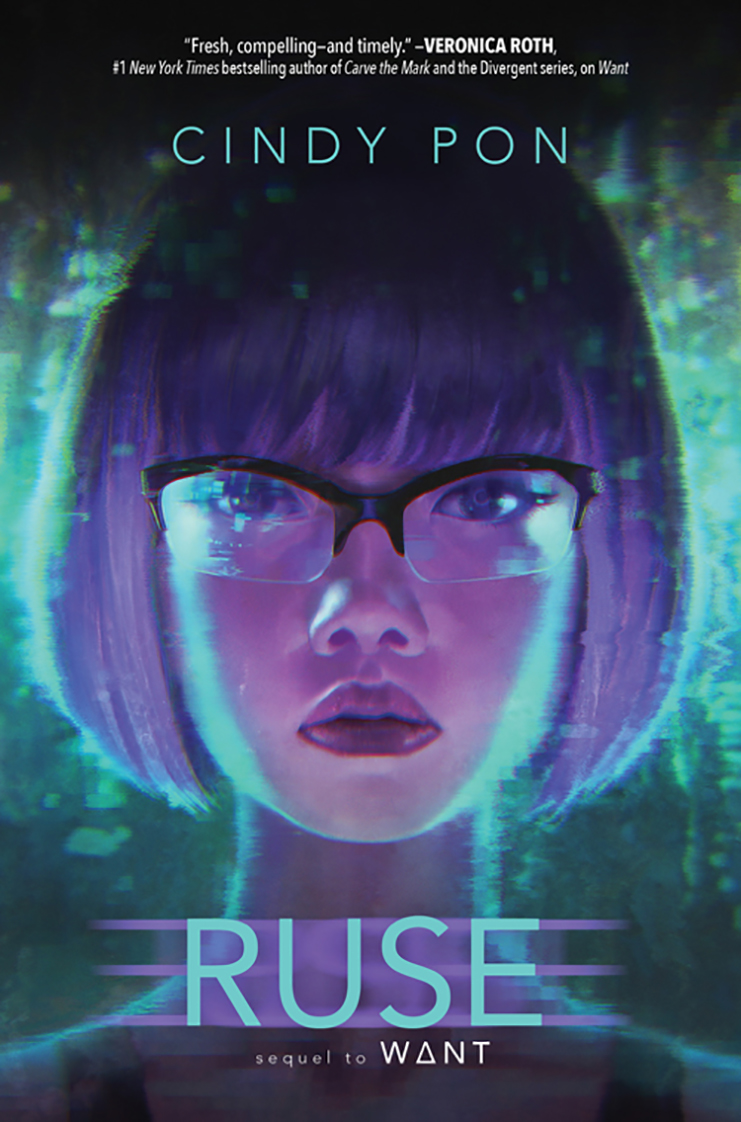 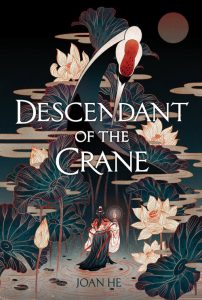 Descendant of the Crane
By Joan He

Princess Hesina has never wanted to be queen of Yan, but when her father dies, she must take the throne. She must also find the truth behind her father’s death, which she believes was murder. Surrounded by schemes and dangerous questions, she decides to consult a soothsayer – even though dealing with magic could condemn her to death. The words of the sooth lead to more mysteries, as Hesina begins to uncover the secrets of her kingdom, and her own family.
Joan He’s debut novel captures the lush romance of a Chinese palace drama, with beautiful costumes, political intrigue, and flashy action. Her obvious love of the genre provides a richly detailed setting, and one that’s a welcome change from the quasi-medieval European standard for most fantasy stories. However, sometimes it feels like He is a little too eager to follow the conventions of a drama instead of trying to tell a unique story.

Still, Hesina is a compelling heroine. A good-hearted young woman determined to uphold justice, she relentlessly pursues the truth. But as she faces an increasingly complicated and hostile world, her idealism gives way to uncertainty. Her flaws and failings become evident, but make her a more interesting and relatable protagonist.

The other characters aren’t always so developed; many come across as fairly stock figures, more there to move the plot than to be well-rounded individuals. Some, like Akira, the enigmatic and brooding convict-turned-investigator, seem to be He indulging in tropes that end up sticking out a bit.

The story also tries to deal with issues of xenophobia through the oppression of the sooths. Unfortunately, any parallel to real-world injustices is undermined due to the fact that they have powers beyond normal human ability. They can perform all kinds of dangerous supernatural feats, far beyond just speaking visions. While this does not justify their mistreatment, it misses the mark in its attempt to explore real discrimination.

Overall, Descendant of the Crane does feel like a first novel, but it’s an entertaining read, and easy to follow through all the twists and turns of court intrigue. The book ends somewhat on a cliff-hanger, with plenty of set up for a sequel. If He continues the story, it will be worth seeing where she takes it, and if her style develops as well. 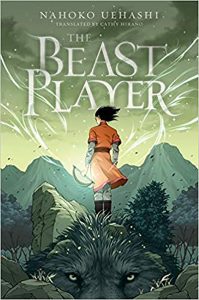 The Beast Player
By Nahoko Uehashi, translated by Cathy Hirano

In this fantasy novel, orphan Elin grows up amidst terrible loss and sorrow, but she finds deep solace in nature. She learns that she has a special connection to the two great animals of the realm: the Toda, fierce water serpents used for battle, and the Royal Beasts, powerful winged creatures that represent the ruling authority. As she grows up, she finds herself caught in plots that threaten to tear the kingdom apart, using her beloved creatures as weapons. She must find a way to save those she holds dear, while trying to stave off a looming civil war.

Although the book was originally published in Japanese, the translated text maintains a strong lyrical quality. This is especially evident in the chapters that cover Elin’s childhood with her foster father, a kind beekeeper who shows her the intricate beauty of the natural world. The writing carries the joy and wonder of this bright point in Elin’s life, and portrays the eager curiosity that is an important part of her personality.
Passionate and dedicated, Elin makes an appealing protagonist, and Uehashi gives the reader plenty of time to grow with her and feel for her. But the story also includes other characters who often seem awkwardly inserted into the plot. This results in rather jarring changes in the point of view, as well as occasional confusion about who a side character is and why they’re important. One fairly major character is introduced towards the end of the book, and is granted a significance that doesn’t really correspond with the amount of time we have with him.

The overall pacing of the story is also somewhat odd. Certain sections feel rushed, while others feel almost excessively detailed. But maybe the most unexpected part is the ending, which comes so abruptly that the narrative feels unfinished, as it stops at what would probably be the climax in most other books. Perhaps Uehashi meant for this to make the reader focus on the heart of the story, which is Elin’s love for the Beasts. However, the sudden end and lack of resolution may leave many disappointed.

Despite some uneven aspects, The Beast Player is an engaging story, and Elin is a memorable character. For all her talents and hard-won knowledge, her greatest strength is her compassion. It’s satisfying to see a hero who succeeds not with might or cunning, but by empathy for others. 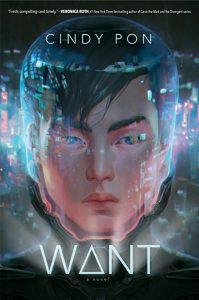 In Want, Taipei, like the rest of the world, is wrapped in a thick haze of pollution. The city’s population is divided into the haves and have-nots: the wealthy yous are the few privileged enough to buy comfort and good health, while the meis are the masses of ordinary people who struggle just to survive. Angry at this injustice, young Jason Zhou and his friends work to fight against Jin Corp, one of the major forces that rules (and divides) the city. They come up with a daring scheme to strike at the company, though the plan requires Jason to get close to the enemy. In doing so, he finds himself falling for Daiyu, the daughter of Jin Corp’s CEO, and things become much more complicated.

Cindy Pon’s fast-paced novel brings together dazzling technology and grim environmental and social conditions for an uncomfortably plausible near future. Her Taipei is full of beauty, suffering, danger, and delicious food – with her characters in the thick of it. Jason’s first-person view provides a vivid immediacy; though as a street-smart, knife-wielding “bad boy” with a softer heart than he wants to show, the narration sometimes comes across as overly self-conscious. However, he’s a likeable protagonist, with honest fears and deep affection for his friends that help balance out his too-cool persona.

In another deft balancing act, Pon gives the reader a clear sense of the pain and outrage caused by the you society, yet also shows the allure of its luxuries. At first, Jason scorns the yous, disgusted by their carelessly opulent lifestyle; but as he infiltrates their domain, he realizes how dismayingly easy it is to accept their ways. Along the way, he must reassess his understanding of Daiyu, who quickly becomes someone he genuinely admires.

The romance between Jason and Daiyu develops as the plot escalates, bringing greater tension to the story, and especially to Jason’s relationships with his friends. But their bonds remain a vital thread throughout the book, underscoring the importance of individual action in the face of monstrous corporate power. Jason’s friends are a multi-ethnic, queer-inclusive group of young people – all very different but united in their dedication to their cause. The talents and resources possessed by the group are so excellent, it frankly strains plausibility. But the characters themselves are compelling enough to overlook these liberties.

Want is a timely novel, taking a more nuanced approach to the often heavy-handed genre of YA dystopian sci-fi. Pon doesn’t shy away from the ugliness of inequality, but does offer encouragement to young people who want to fight for a better world. 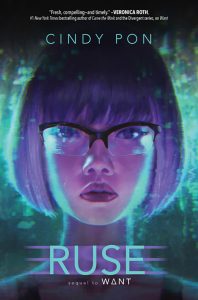 Ruse, Cindy Pon’s sequel to Want, continues the story of corporate corruption and youthful uprising. Shortly after the events of the first book, Jason Zhou and his friends are dealing with the aftermath of their strike on Jin Corp, as their victory has been marred by the death of one of their own. Jason withdraws from the group, retreating alone with his now-girlfriend Daiyu. But Jin Feiming, the CEO of Jin Corp, seeks retaliation; murder and theft set off another crisis that pulls Jason back. As he reunites with his friends, now in Shanghai, he must also face the possibility that he cannot trust Daiyu. But there’s barely time for personal feelings as the fight against Jin escalates. It seems he will stop at nothing to win, and Jason and his friends know they need to take Jin down once and for all.

While Ruse follows similar themes from the first book, and continues to depict the grit, glamor, and tasty food of city life, it also brings in some new elements. Lingyi, the mastermind of the scheme in Want, becomes a primary character. The story moves between Jason’s first-person narration, and Lingyi’s third-person, with a few chapters from Daiyu’s point of view as well. The switches work fairly smoothly and the different perspectives bring more facets to the world.

Less successful is the plot overall, which seems somewhat scattered, and then hurries through the final act. It may be that Pon intended to convey the feeling of a more complex situation, but the result is a storyline that comes across as a bit messy.

Although the plot lacks the focus of the first book, Pon’s attention to emotional content ensures that the story is still grounded in the humanity of the characters. Jason and his friends have to grapple with the guilt and grief around the loss of their comrade, as well as the despair from fighting what seems to be an impossible battle with Jin Corp. But once again, their bonds with each other and their empathy for others give them the determination to continue.

Ruse is a solid conclusion to Pon’s duology. Both books address the challenge of trying to do the right thing in spite of overwhelming opposition, and the difficulty of not knowing if your actions actually matter. It’s a particularly intense feeling in these current times; but as Pon writes in her acknowledgements, “[…] everything that we do to affect change, no matter how big or small, truly does make a difference. I believe in holding on to hope.” This is the underlying thesis for the duology, but especially Ruse, and it’s a welcome message for young readers.