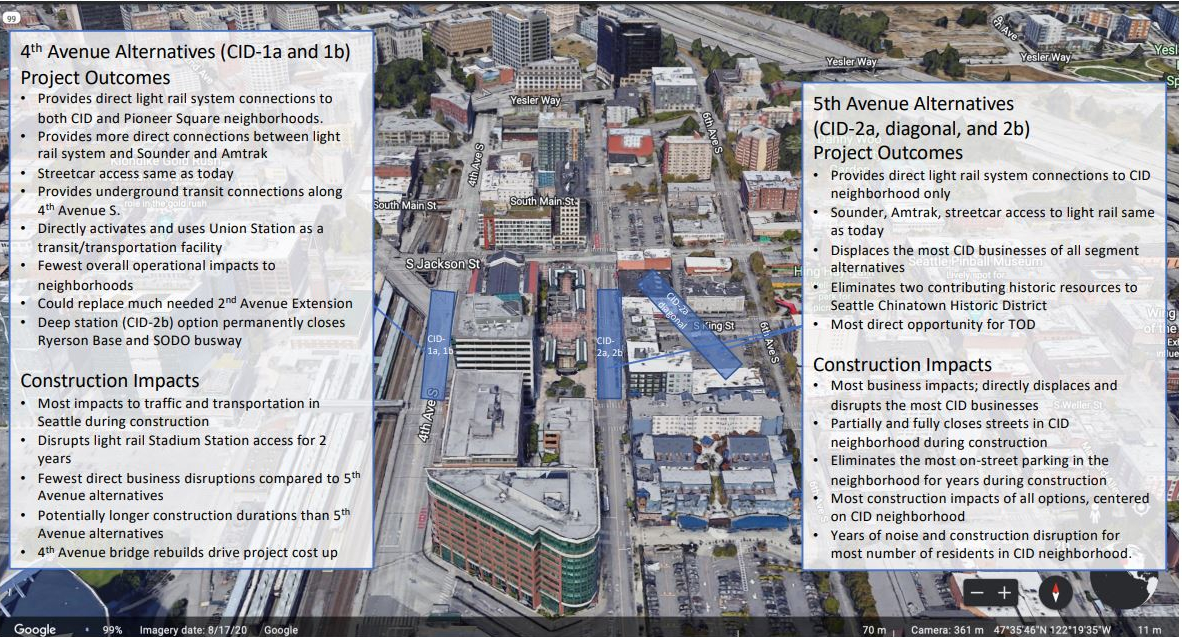 Sound Transit’s light rail expansions into West Seattle and Ballard will add a second light rail station to the Chinatown International District (CID), and it will have significant impacts on the neighborhood. Until April 28, 2022, Sound Transit is gathering comments from the public on its Draft Environmental Impact Statement (DEIS), which evaluates the impacts of the project.

“Even if you find transit boring, this project really matters,” said MaryKate Ryan, Community Preservation Associate with Historic South Downtown (HSD). “If you care about Pioneer Square or the CID, this project matters to you. And your comments deserve to be heard.”

There are five options for where and how to build the new CID station, which is part of an expansion approved by voters in 2016.

Connecting with the existing one, the two stations will create a transfer point between three light rail lines extending across the region, from Tacoma to West Seattle to Ballard, and across to Redmond. “This will be the largest transit stop, including all of the transit options that are in the area, north of San Francisco,” said Kathleen Johnson, executive director of Historic South Downtown. “When you’re making decisions at this level, it’ll have ramifications for 100 years.”

After April 28, comments sent to Sound Transit will be publicly available, and help inform a final Environmental Impact Statement, scheduled for publication in 2023. Only then will the Sound Transit Board select the final route and station locations, and design and construction (scheduled for 2026) will start.

With funding from the City, Historic South Downtown has engaged in helping people and organizations in the area understand the new station, getting rid of the “transit speak” and striving to make the detailed, 2,000-page Draft Environmental Impact Statement more accessible.

Unlike other sections of the route, Sound Transit did not settle on a “preferred alternative” for the CID station, leaving five options on the table. “There are two ideas where the station could go, period,” said Ryan.

These are 4th Avenue or 5th Avenue, and in either case the tunnel could be built shallow or deep (think Beacon Hill station and its elevator). Combined with a diagonal shallow station option under 5th Avenue, that makes five options for the Sound Transit Board to choose from.

“There is no perfect decision,” said Johnson. “And each of the options has trade-offs. And people need to understand what those trade-offs are.”

According to Sound Transit’s DEIS, both 4th Avenue stations would exist underground between Union Station and King St. Station, and would require demolishing and rebuilding the 4th Avenue South Viaduct. The shallow station would be 80 feet deep and would cause the ICON apartment building to become temporarily inaccessible during construction, displacing up to 120 units. It also would displace an estimated five to eight businesses, including 120 employees. It would require rebuilding Stadium Station, closing it for two years, and disrupt the streetcar for two years. Construction would last nine to 11 years, the longest for any of the choices.

The shallow option on 5th would result in displacement of 19 businesses and 170 to 230 employees. According to the International Examiner’s analysis of parcels that would be affected, displaced businesses would likely include Joe’s Bar and Grill, Ping’s Dumpling House, Chung Chun Rice Dog, Musashi’s, Carpet King Corporation, Milkie Milkie Desserts, Oasis Tea Zone, the Bank of America, as well as the parking lot adjacent to The Publix. Construction would take eight to nine years, and disrupt the streetcar for six months, but would detour significantly less traffic through the neighborhood than the 4th Avenue options.

The 5th Avenue shallow diagonal option would displace 19 businesses, temporarily close eight for about a year, and would take five to six years to build, shorter than the others. It would also cause fewer traffic closures and reroutes.

Finally, the deep station on 5th would result in 18 business and 170 employee displacements, including the same businesses as its shallow counterpart, and would take six and a half to seven and a half years to construct.

Some of the business displacements might last for nine months or less, which Sound Transit considers temporary. Historic South Downtown disputes this. “No one can afford to put their business on hold for nine months,” said Ryan.

Wherever the station is built, constructing it would involve closing roads and diverting traffic into the CID, according to a Sound Transit assessment of cumulative impacts of the new station. Building on 4th Avenue would divert far more traffic into the neighborhood and for longer, as compared to 5th Avenue.

“Street closures could also affect event-related revenue for these businesses from events at the nearby stadiums,” the DEIS noted.

Brien Chow and Betty Lau, members of the Chong Wa Benevolent Association, told the South Seattle Emerald they favored building the station on 4th Avenue, believing it would disrupt the neighborhood and businesses less.

Activist group the CID Coalition said in a statement that all of Sound Transit’s options for the station would “cause significant displacement and disruption,” and the Coalition did not favor any of the ones proposed. “[W]hile we believe expansive, accessible public transit is important, we also believe it shouldn’t come at the expense of people’s homes and livelihoods,” according to the statement.

The CID Coalition worried about ripple effects like construction dust and traffic posing hazards to seniors, businesses being replaced by new ones that don’t serve the community, and that Sound Transit didn’t have a detailed enough plan for addressing neighborhood displacement. “In short, we’re very concerned that all of Sound Transit’s talk about approaching this project with a racial equity lens is exactly that: just talk.”

Other neighborhood organizations plan to send their public comments on the proposals to Sound Transit by the end of April, but are refraining from making public statements until then.

In the DEIS, Sound Transit acknowledges that the new station could put displacement pressures on the CID neighborhood. Seattle’s 2016 equity analysis found the neighborhood has a high displacement risk and “high access to opportunity,” the DEIS notes – but this analysis did not include the future light rail, “which would increase access to opportunity and could increase displacement risk near stations,” because of increased property values and new development driven by the new expansion.

This could change the demographics of the neighborhood and displace businesses forever, Sound Transit noted.

To build on 5th Avenue, Sound Transit would acquire properties as necessary near the Chinatown Gate (which would be wrapped for protection during construction) for the station entrance. After construction, they could be developed as what Sound Transit calls equitable Transit Oriented Development (eTOD) with the guidance of the community. The agency notes that up to 360 housing units could be built near the station that wouldn’t exist otherwise, if the station is built under 5th Avenue. Sound Transit is working with the community to come up with plans to strengthen neighborhood cohesion.

Sound Transit came up with goals for the project using the Racial Equity Toolkit. Along the whole West Seattle and Ballard extension, Sound Transit planning documents note, “the C-ID station area is the only station area densely populated by communities of color.” In its racial equity analysis, the agency notes that historically, transportation projects including the rail line, stadium and freeway construction were planned in the CID without community input. A goal of the project is therefore to “limit harmful impacts of the project and work with impacted communities to identify opportunities to repair past harm.”

Building the 4th Avenue station would require demolishing the viaduct under 4th. According to its Racial Equity Toolkit analysis, Sound Transit heard community interest in studying the viaduct’s lifespan so that if it needs to be replaced soon, it could be done concurrently with the station construction and not impact the neighborhood again with serious traffic detours.

Historic South Downtown encourages people to learn as much as they can about the project. To learn about a specific issue, like environmental justice or traffic impacts, Johnson suggests a Ctrl+F search on the DEIS document.

Historic South Downtown also has a variety of tools on its website, including summaries of the project, mapping visualizations, and recordings of community advisory group meetings. Community members can reach out to Johnson and Ryan with questions via contact information on HSD’s website, or schedule a virtual one-on-one meeting with Sound Transit staff.

Community members can submit comments to Sound Transit online. “It doesn’t have to be a technical comment,” said Johnson. “It could be a simple comment about what you care about, and what you want the Board to pay attention to.”

The more specific comments are, the better, Ryan noted. Hearing about how the project would impact people is more likely to get Sound Transit’s notice than an overall negative but vague comment.

Johnson noted that if the community doesn’t find any of the five options acceptable, this is a valid perspective to bring to Sound Transit. “They’re charged with putting a train station through this neighborhood,” she said. “That doesn’t leave a whole lot of choices. But there might be other choices.”