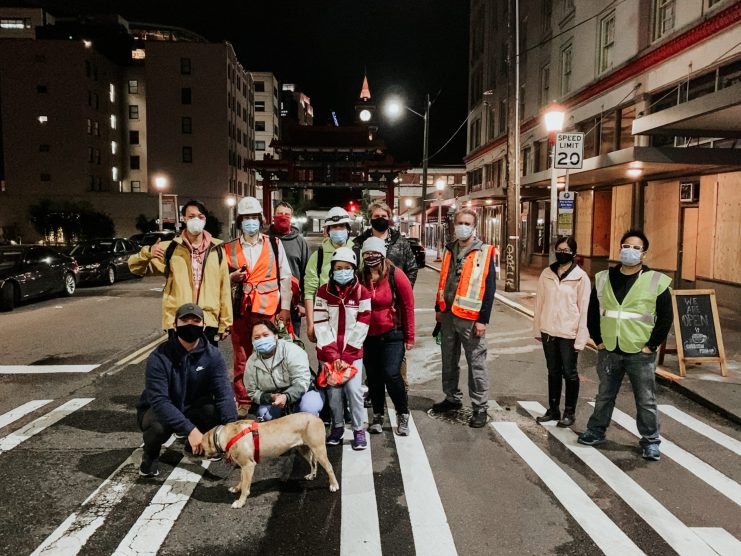 Each night since the beginning of June, members of a new volunteer neighborhood watch group meet at the pavilion at Hing Hay Park. Their mission: To help make nights in the Chinatown International District (CID) feel a little safer.

The group, called CID Community Watch, was started by former neighborhood resident Matthew Toles. For as long as he’s lived in and visited the CID, Toles said he couldn’t ignore the fights, drug dealing and other public safety issues that made the CID “just generally unpleasant to be out at night.”

The group was formed after several businesses in the CID were vandalized at the end of May. Following demonstrations in downtown Seattle against racism and police brutality after the murder of George Floyd by Minneapolis police, a group of vandals took advantage of the volatile evening and smashed their way through the CID, beaking the glass windows of many businesses and grabbing items inside.

Tanya Woo, whose family restored and rebuilt the Louisa Hotel, has regularly kept an eye on the neighborhood for the past two years, often sitting in her car for a half hour after late shifts at work. She was in the neighborhood the night when it was vandalized. “I’m sitting there with my windows open, you could hear the glass breaking, you could hear the boards being pulled off.”

In the days after the damage, Toles saw a huge desire from the community to do something. He helped organize the first neighborhood night watch on June 2, and about a dozen people showed up to help. Woo quickly joined the effort with enthusiasm. She helps the group with logistics as well as joining on the nightly rounds. As someone who is in the CID almost every day, she said, “I have a feeling where all the hot spots are.”

The group patrols the neighborhood nine times per week, from 10 p.m. to 12 a.m. Sunday through Thursday, and from and 10 p.m. to 2 a.m. Friday through Saturday. Typically, six to 12 people volunteer for a shift.

Members of the group wear bright colors and greet everyone they see. This is because their most powerful tool to improve public safety is being visible out on the street, whether as a helpful presence or a watchful eye, said Toles. “If we can deter crime and violence behavior just by being visible, that is the greatest victory.”

If they see a dicey situation occur, they may intervene, call the authorities, or let it go, depending on the circumstances. “We don’t get in fights, we don’t cause violence,” said Toles. Usually they will say hello, and ask people if they need help.

The idea is to make the CID a less tempting target for someone looking to cause trouble, said Chris Yin, who joined the group wanting to give back to the community. “We’re not looking to replace the police, we’re not a militia,” said Yin.

For CID businesses, vandalism isn’t just a nuisance, said Woo — especially not after the neighborhood saw a dramatic loss in business due to coronavirus, including racist assumptions connecting the neighborhood to the virus’s apparent origin in China. The impacts on the neighborhood have many worrying that businesses will survive. “Any little thing could make or break them right now,” Woo said. “Any crime at all really hurts at this time when these businesses are not doing very well at all. And these windows are not cheap.”

Mostly when the group goes out, the streets are quiet, Toles said. “We say hi to a lot of people, pick up some trash, pick up some needles,” introduce themselves to local businesses. Sometimes they’ll give water or snacks to homeless residents in the neighborhood, who the group has been getting to know. Once Toles helped a homeless man fill out information to receive his stimulus check.

Toles sees the group as a way to build community. “For me, the reason it’s rewarding is it’s boring enough that I can get to know the people on the shift,” he said.

The community response to the group so far has been “overwhelmingly positive, like an unbelievable amount of support,” Toles said.

“I think a group like this brings hope to the community,” said Woo. “There’s so much going on right now in Seattle that I think people are just scared, they’re worried about their community, and no one comes out at night.”

Slowly, this may be changing. Woo noticed that while the group is out, the streets are quieter, and activity resumes when the group ends its shift. People are aware of the presence of the group. Meanwhile, Woo has noticed neighborhood residents are coming out more, opening their windows to the night air.

The group is still developing its mission and figuring out the scope of what it will take on. People have reached out suggesting the group work on picking up trash and needles, organizing a bus buddy system for people taking public transport late at night. “As long as we’re making a positive impact in the community, we’re really open to seeing where this takes us,” said Yin.

The group is in contact with CID neighborhood organizations and wants to work with them. Toles spoke with members of the International District Emergency Center, who offered advice.

Woo hopes the group is visible in the neighborhood to improve public safety — and to show, as the late Donnie Chin did, that someone is out there who cares. “People care, and we want to help.”

For those who want to get involved, Toles’s advice is simple:  “10 o’clock, Hing Hay park, every night.”