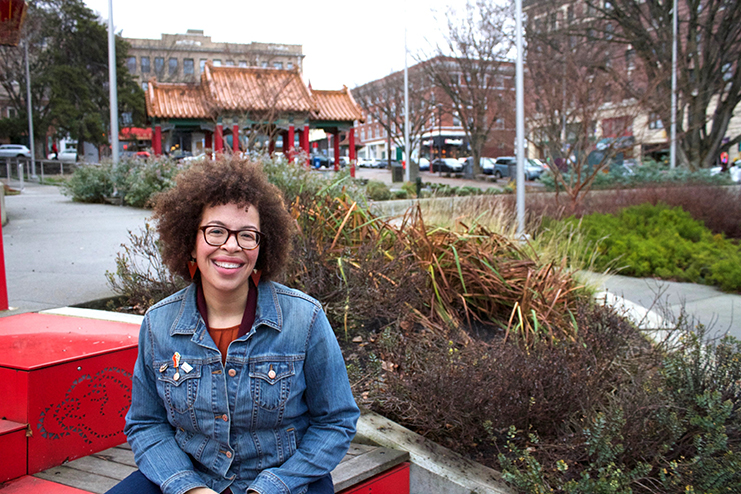 After a decisive victory in the November general election, Kirsten Harris-Talley is ready to bring her skills as an activist and organizer to the task of representing Washington’s 37th Legislative District, which includes the Chinatown International District (CID), southeast Seattle, Renton and Skyway.

Instead of heading to Olympia, though, Harris-Talley and her fellow legislators will craft bills and policies remotely. A virtual session is one consequence of the COVID-19 pandemic that has raged through the state. The other consequences are monumental: A public health crisis, economic downturn, people worried about paying rent and keeping businesses alive. They are the problems Harris-Talley and her colleagues will tackle in January.

Harris-Talley will serve as a legislator at the same time as she stays home with her children. It’s an unusual circumstance she’s glad to share with her colleagues. “I’m excited about how that shows us the humanity and person-ness of all the people who are leading in Olympia,” she said.

Though she will soon hold elected office, Harris-Talley talks about her campaign with the language of an organizer. During the campaign, she and her staff were attuned to the ways people showed up for each other with mutual aid through the pandemic, and marched through the streets in the summer for policing justice and racial equity.

Harris-Talley wants this organizing spirit to continue when she takes office, representing perhaps the most diverse district in the state. “We want an office that’s accessible, that folks feel like they can pick up the phone, know someone friendly will be there, know someone will hear what they are saying, and work to take action with them on it.”

But Harris-Talley will also use her skills as an organizer on the House floor — even if it’s a virtual House floor.

“So much about having good policy is good organizing,” Harris-Talley said. “As an activist, I have a very clear vision on what’s possible. And sometimes, processes of legislation can be about what had been possible before. And sometimes it’s short on the imagination piece of what can be possible ahead of us. I think this moment begs of us to really be creative in ways, to really look at structural changes.”

Harris-Talley grew up in rural Missouri, in a community she has described as impoverished, the child of a Black father and white mother in a majority white community. She moved to Chicago briefly to attend the The School of Arts Institute, before moving to the Seattle area in 1999. The first place she felt at home in Seattle, Harris-Talley recently told the South Seattle Emerald, was the Central District, where she became aware of local activism.

In Seattle, Harris-Talley was active in the No New Youth Jail movement, and built a career in reproductive justice work, becoming executive director of NARAL Pro-Choice Washington. She was also a founding board member of SURGE Reproductive Justice, and worked as a program director with Progress Alliance of Washington.

In 2017, she won a vote to serve on the Seattle City Council for 51 days to replace Tim Burgess, who assumed the role of Mayor after the resignation of Ed Murray. Behind the dais, she shaped the City budget, and championed a tax on big businesses to fund housing and emergency shelters. While that measure did not succeed, it was a predecessor to the JumpStart Seattle big business tax that City Council passed this year.

In the weeks since she won election, Harris-Talley has prepared for her new job by undergoing orientation for new legislators. She has met with members of the legislature’s Black caucus, which doubled in size this year, with fellow south Seattle Rep. David Hackney in the 11th District about overlapping transportation needs between the neighboring districts, and with Seattle and King County Councilmembers.

Less conventionally, her campaign’s youth team has assembled an “accountability council,” made up of advocacy groups, organizations and leaders in the 37th District.

Harris-Talley wants to serve on a committee that has leverage. over taxation and revenue. “I’m a policy nerd, I really am a budget nerd,” she said. “We need revenue solutions in Washington state because of our upside down tax code.”

To start, she wants the state to implement a capital gains tax, and restructure Business and Occupation (B&O) taxes so the burden doesn’t fall heavily on small and medium businesses. Beyond this, she would like to see preemptions removed from other progressive tax options, like an income tax. “It’s beyond time for us to open up to other options so that government, on every level, can figure out how they get the dollars they need to take care of people,” she said.

She’s also interested in committees that oversee policing, perhaps the Public Safety Committee that her predecessor Eric Pettigrew served on for years. For the diverse 37th district, these issues have a unique impact, Harris-Talley said. Juvenile justice is another issue she wants to work on, one which is a priority for members of the Black caucus this year.

Harris-Talley wants to see the policing and criminal justice system reformed so it doesn’t criminalize people for things that should fall under the purview of public health, like drugs. She wants the legislature to ask: “Are we criminalizing young people when what they really need is guidance when they make mistakes in life?”

Harris-Talley has spoken with business owners in the CID about how they are adjusting to COVID-19, and talked with people in the CID, Pioneer Square and the Central District about opportunities to create community ownership, affordable housing, public service infrastructure.

Harris-Talley’s district encompasses many neighborhoods and communities, but some share concerns that are also priorities for Harris-Talley. One is the threat of displacement and gentrification facing elders in the CID and Central District, Harris-Talley said. Her priority is to support “community-driven models of housing that will stabilize and let folks who are there stay in that community.”

Access to affordable healthcare is another priority for seniors, and for Harris-Talley. She wants to see a cap on insurance coverage increases, and expansion of coverage, and open enrollment for health insurance throughout the year.

“The big thing I think next year is going to be, is to prevent as many cuts as we can, particularly for those that impact health and human services, housing and education,” she said.

Harris-Talley wants to see a Working Families Tax credit in the state. “To have that funded and to have dollars flowing into communities is going to be huge across the board,” she said. “Whether residents or commercial or business owners, the biggest consideration right now is the burden of rent.”

Harris-Talley favors rent forgiveness after the moratorium on evictions ends, a more progressive position, she said, than many of her colleagues may have.

She wants to see the state to meet the demands of immigrant and refugee advocates calling for an additional $60 million dollars more in COVID-19 relief for these community members, many of whom are shut out of other forms of COVID-19 relief. (Gov. Jay Inslee agreed to $40 million — but not the full $100 million — after pressure from these advocates).

After years as an activist and advocate, Harris-Talley feels excited to step into a new role, and bring to it her organizing energy.

“As an activist, I’m inherently optimistic about what’s possible,” Harris-Talley said. “I know that these are structural things that were created, which means we can recreate them in ways that actually serve us better.”